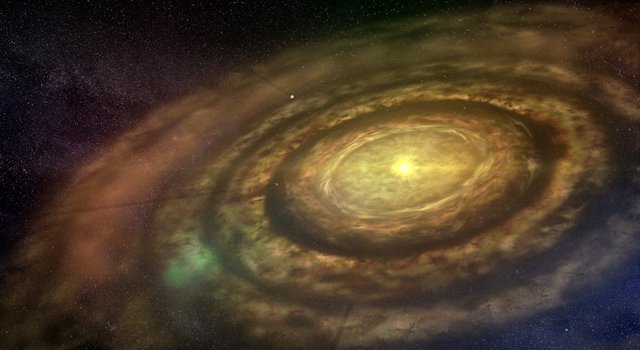 This artist's conception shows a newly formed star surrounded by a swirling protoplanetary disk of dust and gas. Debris coalesces to create rocky 'planetesimals' that collide and grow to eventually form planets. The results of this study show that small planets form around stars with a wide range of heavy element content, suggesting that their existence might be widespread in the galaxy.
Credit: University of Copenhagen/Lars Buchhave

The formation of small worlds like Earth previously was thought to occur mostly around stars rich in heavy elements such as iron and silicon.

PASADENA, Calif. - The formation of small worlds like Earth previously was thought to occur mostly around stars rich in heavy elements such as iron and silicon. However, new ground-based observations, combined with data collected by NASA's Kepler space telescope, show small planets form around stars with a wide range of heavy element content and suggest they may be widespread in our galaxy.

A research team led by Lars A. Buchhave, an astrophysicist at the Niels Bohr Institute and the Centre for Star and Planet Formation at the University of Copenhagen, studied the elemental composition of more than 150 stars harboring 226 planet candidates smaller than Neptune.

"I wanted to investigate whether small planets needed a special environment in order to form, like the giant gas planets, which we know preferentially develop in environments with a high content of heavy elements," said Buchhave. "This study shows that small planets do not discriminate and form around stars with a wide range of heavy metal content, including stars with only 25 percent of the sun's metallicity."

Planets are created in disks of gas and dust around new stars. Planets like Earth are composed almost entirely of elements such as iron, oxygen, silicon and magnesium. The metallicity of a star mirrors the metal content of the planet-forming disk. Astronomers have hypothesized that large quantities of heavy elements in the disk would lead to more efficient planet formation. It has long been noted that giant planets with short orbital periods tend to be associated with metal-rich stars.

"Kepler has identified thousands of planet candidates, making it possible to study big-picture questions like the one posed by Lars. Does nature require special environments to form Earth-size planets?" said Natalie Batalha, Kepler mission scientist at NASA's Ames Research Center at Moffett Field, Calif. "The data suggest that small planets may form around stars with a wide range of metallicities -- that nature is opportunistic and prolific, finding pathways we might otherwise have thought difficult."

The ground-based spectroscopic observations for this study were made at the Nordic Optical Telescope on La Palma in the Canary Islands; Fred Lawrence Whipple Observatory on Mt. Hopkins in Arizona; McDonald Observatory at the University of Texas at Austin; and W.M. Keck Observatory atop Mauna Kea in Hawaii.

Launched in March 2009, Kepler searches for planets by continuously monitoring more than 150,000 stars, looking for telltale dips in their brightness caused by passing, or transiting, planets. At least three transits are required to verify a signal as a planet. Follow-up observations from ground-based telescopes are also needed to confirm a candidate as a planet.