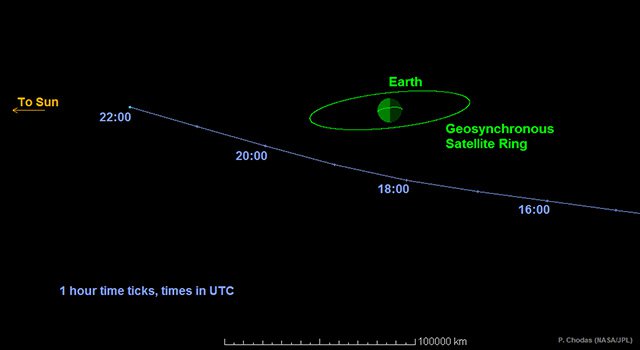 This graphic depicts the passage of asteroid 2014 RC past Earth on September 7, 2014. At time of closest approach, the space rock will be about one-tenth the distance from Earth to the moon. Times indicated on the graphic are Universal Time.
Credit: NASA/JPL-Caltech 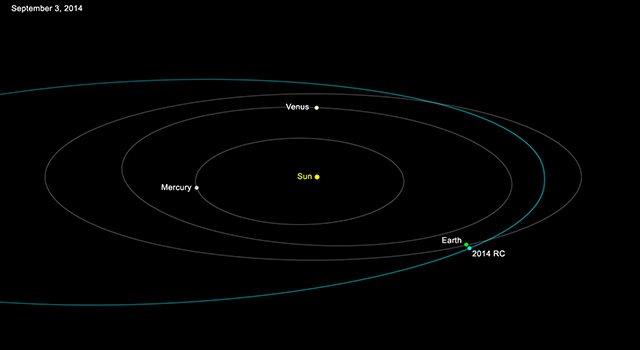 This graphic depicts the orbit of asteroid 2014 RC around the sun. A house-sized asteroid will safely fly past Earth Sunday afternoon, September 7, at a distance equivalent to about one-tenth of the distance between Earth and the moon.
Credit: NASA/JPL-Caltech

Radar data collected by the Goldstone Solar System Radar on September 6 - 7 indicate that asteroid 2014 RC may be larger than originally estimated, with a minimum equatorial extent of 72 feet (22 meters). This is larger than the previous estimate of 40 feet (12 meters), which assumed a spherical body. These disparate and preliminary size estimates might suggest a highly elongated body.

More technical information on the flyby of asteroid 2014 RC can be found on the Near-Earth Object Program website at: http://neo.jpl.nasa.gov

Reports in the media over the weekend that a small meteorite impacted in Nicaragua have yet to be confirmed. A loud explosion was reportedly heard near Managua's international airport Saturday night, and photos of a 39-foot (12-meter) crater have been circulated. As yet, no eyewitness accounts or imagery have come to light of a fireball flash or debris trail that is typically associated with a meteor of the size required to produce such a crater. Scientists say because the explosion in Nicaragua occurred a full 13 hours before the close passage of asteroid 2014 RC, these two events are unrelated.

More technical information on the flyby of asteroid 2014 RC can be found on the Near-Earth Object Program website at:

A small asteroid, designated 2014 RC, will safely pass very close to Earth on Sunday, Sept. 7, 2014. At the time of closest approach, based on current calculations to be about 2:18 p.m. EDT (11:18 a.m. PDT / 18:18 UTC), the asteroid will be roughly over New Zealand. From its reflected brightness, astronomers estimate that the asteroid is about 60 feet (20 meters) in size.

Asteroid 2014 RC was initially discovered on the night of August 31 by the Catalina Sky Survey near Tucson, Arizona, and independently detected the next night by the Pan-STARRS 1 telescope, located on the summit of Haleakala on Maui, Hawaii. Both reported their observations to the Minor Planet Center in Cambridge, Massachusetts. Additional follow-up observations by the Catalina Sky Survey and the University of Hawaii 88-inch (2.2-meter) telescope on Mauna Kea confirmed the orbit of 2014 RC.

At the time of closest approach, 2014 RC will be approximately one-tenth the distance from the center of Earth to the moon, or about 25,000 miles (40,000 kilometers). The asteroid's apparent magnitude at that time will be about 11.5, rendering it unobservable to the unaided eye. However, amateur astronomers with small telescopes might glimpse the fast-moving appearance of this near-Earth asteroid.

The asteroid will pass below Earth and the geosynchronous ring of communications and weather satellites orbiting about 22,000 miles (36,000 kilometers) above our planet's surface. While this celestial object does not appear to pose any threat to Earth or satellites, its close approach creates a unique opportunity for researchers to observe and learn more about asteroids.

While 2014 RC will not impact Earth, its orbit will bring it back to our planet's neighborhood in the future. The asteroid's future motion will be closely monitored, but no future threatening Earth encounters have been identified.

For a heliocentric view of the orbit of asteroid 2014 RC with respect to Earth and other planets, visit: