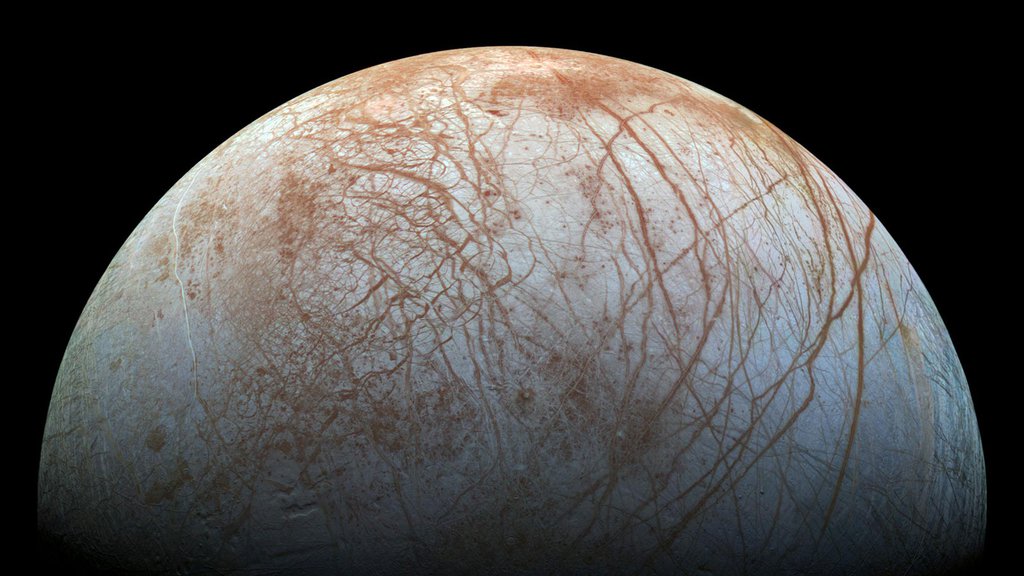 Jupiter's icy moon Europa displays many signs of activity, including its fractured crust and a dearth of impact craters. Scientists continue to hunt for confirmation of plume activity.› Full image and caption
Credit: NASA/JPL-Caltech/SETI Institute

A new study suggests that the thin, hot gas around Jupiter's moon Europa does not show evidence of plume activity occurring in 2001, when NASA's Cassini spacecraft flew past.

A fresh look at data collected by NASA's Cassini spacecraft during its 2001 flyby of Jupiter shows that Europa's tenuous atmosphere is even thinner than previously thought and also suggests that the thin, hot gas around the moon does not show evidence of plume activity occurring at the time of the flyby. The new research provides a snapshot of Europa's state of activity at that time, and suggests that if there is plume activity, it is likely intermittent.

The Europa results are being presented today at the American Geophysical Union fall meeting in San Francisco and published in the Astrophysical Journal. Europa is considered one of the most exciting destinations in the solar system for future exploration because it shows strong indications of having an ocean beneath its icy crust.

Members of Cassini's ultraviolet imaging spectrograph (UVIS) team analyzed data collected by their instrument during the brief time it observed Europa in 2001, as Cassini sped through the Jupiter system en route to Saturn. The observations show that most of the hot, excited gas, or plasma, around Europa originates not from the moon itself, but from volcanoes on the nearby moon Io. In fact, from their data, the researchers calculated that Europa contributes 40 times less oxygen than previously thought to its surrounding environment.

"Our work shows that researchers have been overestimating the density of Europa's atmosphere by quite a bit," said Don Shemansky, a Cassini UVIS team member with Space Environment Technologies in Pasadena, California, who led the study. The team found that the moon's tenuous atmosphere, which was already thought to be millions of times thinner than Earth's atmosphere, is actually about 100 times less dense than those previous estimates.

A downward revision in the amount of oxygen Europa pumps into the environment around Jupiter would make it less likely that the moon is regularly venting plumes of water vapor high into orbit, especially at the time the data was acquired.

Scientists would expect that ongoing plume activity at Europa, as Cassini has observed at Saturn's moon Enceladus, would inject large amounts of water vapor into the area around Europa's orbit if the plumes were large enough, but that is not what UVIS observed.

"We found no evidence for water near Europa, even though we have readily detected it as it erupts in the plumes of Enceladus," said Larry Esposito, UVIS team lead at the University of Colorado at Boulder.

"It is certainly still possible that plume activity occurs, but that it is infrequent or the plumes are smaller than we see at Enceladus," said Amanda Hendrix, a Cassini UVIS team member with the Planetary Science Institute in Pasadena, who co-authored the new study. "If eruptive activity was occurring at the time of Cassini's flyby, it was at a level too low to be detectable by UVIS."

Indications of possible plume activity were reported in 2013 by researchers using NASA's Hubble Space Telescope, launching a wave of interest in searching for additional signs, including this effort by the UVIS team. Cassini's 2001 Jupiter flyby provided UVIS the opportunity to directly measure the environment near Europa, which is not possible with Hubble.

For more than a decade, Cassini's UVIS has observed the cold, dense doughnut of gas that encloses the orbit of Enceladus. There, the massive amount of gas being breathed into orbit around Saturn by the Enceladus plumes acts like a brake on electrons being dragged through it by Saturn's magnetic field, which rotates with the planet. This braking helps to keep down the temperature of the plasma. Apparently there is no such brake at Europa.

Since UVIS saw a hot plasma, rather than a cold one, around Europa's orbit, it suggests Europa is not outputting large amounts of gas -- including water.

Snapshots provided by missions that visited Jupiter prior to Cassini provided strong indications that Io is the major contributor of material to the environment around Jupiter, and indicated a hot, low density plasma surrounding Europa. The new results confirm that. "Io is the real monster here," Shemansky said.

"Europa is a complex, amazing world, and understanding it is challenging given the limited observations we have," said Curt Niebur, Outer Planets program scientist at NASA Headquarters in Washington. "Studies like this make the most of the data we have and help guide the kinds of of science investigations NASA should pursue in the future."

The Cassini-Huygens mission is a cooperative project of NASA, the European Space Agency and the Italian Space Agency. NASA's Jet Propulsion Laboratory, a division of the California Institute of Technology in Pasadena, manages the mission for NASA's Science Mission Directorate, Washington, D.C. JPL designed, developed and assembled the Cassini orbiter. The UVIS team is based at the University of Colorado, Boulder, where the instrument was designed and built.