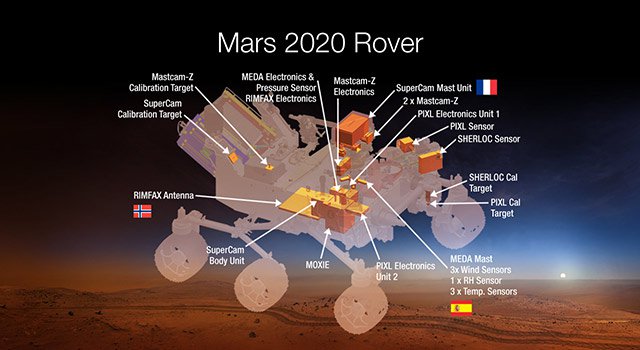 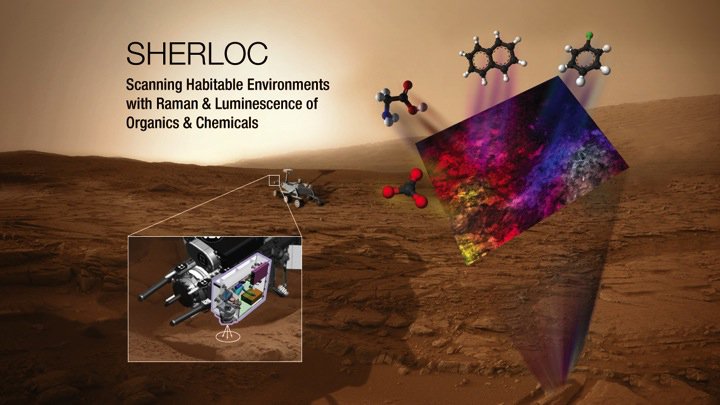 This illustration depicts the mechanism and conceptual research targets for an instrument named Scanning Habitable Environments with Raman & Luminescence for Organics and Chemicals, or SHERLOC. This instrument has been selected as one of seven investigations for the payload of NASA's Mars 2020 rover mission. SHERLOC will be a spectrometer that will provide fine-scale imaging and use an ultraviolet laser to determine fine-scale mineralogy and detect organic compounds.› Full image and caption
Credit: NASA/JPL-Caltech

One of the seven instruments chosen for the payload of NASA's next Mars rover would detect key minerals and carbon chemicals and show where they are, at microscopic scale.

An ultraviolet-light instrument on the robotic arm of NASA's Mars 2020 rover will use two types of ultraviolet-light spectroscopy, plus a versatile camera, to help meet the mission's ambitious goals, including a search for signs of past life on Mars and selection of rock samples for possible return to Earth.

It is called SHERLOC, for Scanning Habitable Environments with Raman & Luminescence for Organics and Chemicals.

SHERLOC will shine a tiny dot of ultraviolet laser light at a target. This causes two different spectral phenomena to occur, which the instrument captures for analysis. The first is a distinctive fluorescence, or glow, from molecules that contain rings of carbon atoms. Such molecules may be clues to whether evidence of past life has been preserved. The second is an effect called Raman scattering, which can identify certain minerals, including ones formed from evaporation of salty water, and organic compounds. This dual use enables powerful analysis of many different compounds on the identical spot.

A moving mirror in the instrument will shift pointing of the ultraviolet laser beam in a scanning pattern to provide a map of the ingredients at a microscopic scale. The laser beam has a diameter of 50 microns -- about half the thickness of a piece of paper. It will provide information on that scale within a target area about half the breadth of a dime.

In addition, the instrument will include a contextual camera utilizing hardware originally developed by Malin Space Science Systems, San Diego, for the Mars Hand Lens Imager (MAHLI) camera on NASA's Curiosity Mars rover. This context imager will enable researchers to correlate the composition information with visible features in the target, resulting in more information than composition alone.

Beegle said, "We'll be able not just to detect these chemicals and minerals with high sensitivity, but we will produce powerful chemical maps. For example, we can see whether organics are clumped together or diffuse, and we can correlate minerals with visible veins or grains in the rock. This also allows us to integrate our results with the other instruments for even more informational content on the samples."

NASA announced selection of SHERLOC and six other investigations for the Mars 2020 rover's payload on July 31, 2014.

The Mars 2020 mission will be based on the design of the highly successful Mars Science Laboratory rover, Curiosity, which landed almost two years ago, and currently is operating on Mars. The new rover will carry more sophisticated, upgraded hardware and new instruments to conduct geological assessments of the rover's landing site, determine the potential habitability of the environment, and directly search for signs of ancient Martian life.