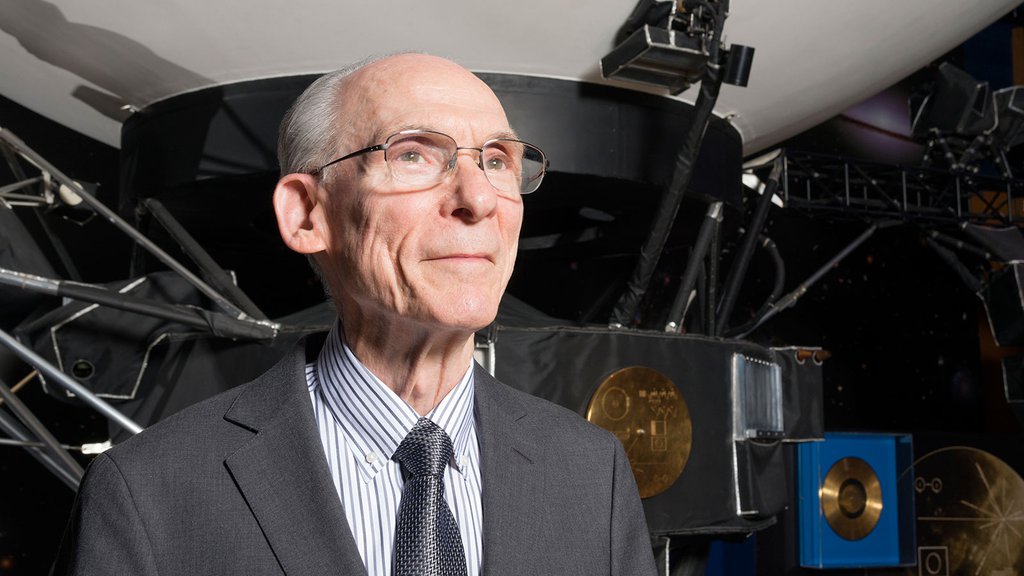 Ed Stone stands before a full-size model of Voyager at JPL.
Credit: NASA/JPL-Caltech

The prestigious prize has been given to Caltech's Ed Stone, former director of JPL and the long-time project scientist for NASA's Voyager mission.

Former Jet Propulsion Laboratory Director Edward Stone - currently the David Morrisroe Professor of Physics at Caltech and the project scientist for NASA's Voyager mission for the past 47 years - has been awarded the prestigious Shaw Prize in Astronomy "for his leadership in the Voyager project, which has, over the past four decades, transformed our understanding of the four giant planets and the outer solar system, and has now begun to explore interstellar space," according to the award citation. The prize comes with a monetary award of $1.2 million.

"This is a tremendous honor," said Stone, "and a tribute to the teams who designed, developed, launched and operated Voyager on an inspiring journey of more than four decades."

Since 1972, Stone has served as the project scientist for the Voyager mission, twin spacecraft designed to tour the solar system and its farthest reaches. The Voyager mission is managed by JPL in Pasadena, California, which Caltech manages for NASA.

Voyager 2 launched in August 1977, and Voyager 1 soon followed, launching in September 1977. Some of the mission's many highlights include the first high-resolution images of the four giant planets of our solar system (Jupiter, Saturn, Uranus and Neptune); the discovery of volcanoes on Jupiter's moon Io; the first images of rings of Jupiter, Uranus, and Neptune; and the discovery of gaps and other complex structures in Saturn's rings.

In 2012, Voyager 1 became the first human-made object to cross into interstellar space, beyond the protective bubble, or heliosphere, that surrounds our solar system. Voyager 2 achieved this milestone more recently, in 2018. Both missions carry Golden Records of Earth sounds, music, images and messages.

Stone was born in Knoxville, Iowa, on January 23, 1936. He graduated from Iowa's Burlington Junior College in 1956 and earned his Ph.D. in physics from the University of Chicago in 1964. Since the Voyager spacecraft launched in 1977, Stone has led and coordinated 11 instrument teams on the project. He also served as the director of JPL from 1991 to 2001, overseeing many space-based missions, including Cassini, and a program of Mars exploration that included Mars Pathfinder and its Sojourner rover.

Stone also played a key role in the development of the W. M. Keck Observatory in Hawaii. In the mid 1980s through the 1990s, he served as a vice chairman and chairman of the board of directors of the California Association for Research in Astronomy, which is responsible for building and operating Keck. He is also on the board of the W. M. Keck Foundation. He is currently playing a similar role in the development of the planned Thirty Meter Telescope, an international partnership that includes the U.S., Canada, China, Japan and India.

Stone came to Caltech in 1964 as a research fellow, joining the faculty as an assistant professor in 1967. He became the Morrisroe professor in 1994 and, in 2004, became the vice provost for special projects at Caltech.

He has served as a principal investigator on nine missions and as a co-investigator on five additional missions. He has more than 1,000 publications in professional journals and conference proceedings, and has mentored a large number of students, postdocs, and research scientists. Stone is the recipient of numerous awards, including the President's National Medal of Science (1991), the Magellanic Premium (1992), the Carl Sagan Memorial Award (1999), the Philip J. Klass Award for Lifetime Achievement (2007), the NASA Distinguished Public Service Medal (2013) and the Howard Hughes Memorial Award (2014). He is a member of the National Academy of Sciences.

The Shaw Prize is awarded annually in three categories: Astronomy, Life Science and Medicine, and Mathematical Sciences. It is an international award managed and administered by The Shaw Prize Foundation based in Hong Kong. Mr. Shaw has also founded The Sir Run Run Shaw Charitable Trust and The Shaw Foundation Hong Kong, both dedicated to the promotion of education, scientific and technological research, medical and welfare services, and culture and the arts.

The 2019 Shaw laureates will receive their awards in Hong Kong at the ceremonial prize-giving on Wednesday, Sept. 25, 2019.

For a short video on Ed Stone, click here: