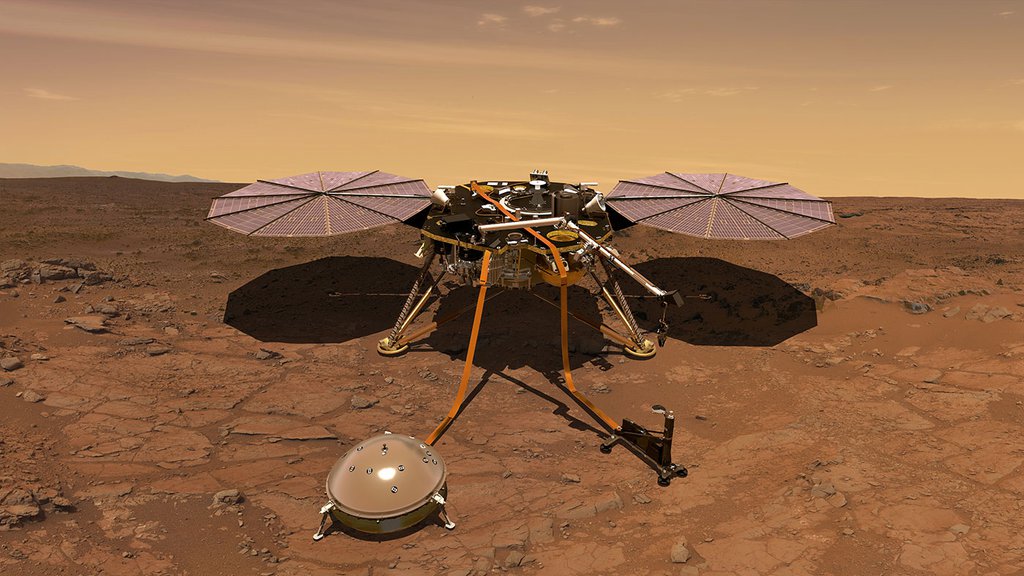 An artist's rendition of the InSight lander operating on the surface of Mars.› Full image and caption
Credit: NASA/JPL-Caltech

NASA has sent lots of missions to Mars, but InSight will stand apart in a number of ways.

NASA's Mars InSight lander team is preparing to ship the spacecraft from Lockheed Martin Space in Denver, where it was built and tested, to Vandenberg Air Force Base in California, where it will become the first interplanetary mission to launch from the West Coast. The project is led by NASA's Jet Propulsion Laboratory in Pasadena, California.

We know what "The Red Planet" looks like from the outside -- but what's going on under the surface of Mars? Find out more in the 60-second video from NASA's Jet Propulsion Laboratory.

NASA has a long and successful track record at Mars. Since 1965, it has flown by, orbited, landed and roved across the surface of the Red Planet. What can InSight -- planned for launch in May -- do that hasn't been done before?

A dictionary definition of "insight" is to see the inner nature of something. InSight (Interior Exploration using Seismic Investigations, Geodesy and Heat Transport) will do just that. InSight will take the "vital signs" of Mars: its pulse (seismology), temperature (heat flow), and its reflexes (radio science). It will be the first thorough check-up since the planet formed 4.5 billion years ago.

InSight's team hopes that by studying the deep interior of Mars, we can learn how other rocky planets form. Earth and Mars were molded from the same primordial stuff more than 4 billion years ago, but then became quite different. Why didn't they share the same fate?

When it comes to rocky planets, we've only studied one in great detail: Earth. By comparing Earth's interior to that of Mars, InSight's team hopes to better understand our solar system. What they learn might even aid the search for Earth-like exoplanets, narrowing down which ones might be able to support life. So while InSight is a Mars mission, it's also more than a Mars mission.

One key way InSight will peer into the Martian interior is by studying motion underground -- what we know as marsquakes. NASA has not attempted to do this kind of science since the Viking mission. Both Viking landers had their seismometers on top of the spacecraft, where they produced noisy data. InSight's seismometer will be placed directly on the Martian surface, which will provide much cleaner data.

Scientists have seen a lot of evidence suggesting Mars has quakes. But unlike quakes on Earth, which are mostly caused by tectonic plates moving around, marsquakes would be caused by other types of tectonic activity, such as volcanism and cracks forming in the planet's crust. In addition, meteor impacts can create seismic waves, which InSight will try to detect.

Each marsquake would be like a flashbulb that illuminates the structure of the planet's interior. By studying how seismic waves pass through the different layers of the planet (the crust, mantle and core), scientists can deduce the depths of these layers and what they're made of. In this way, seismology is like taking an X-ray of the interior of Mars.

Scientists think it's likely they'll see between a dozen and a hundred marsquakes over the course of two Earth years. The quakes are likely to be no bigger than a 6.0 on the Richter scale, which would be plenty of energy for revealing secrets about the planet's interior.

All of NASA's interplanetary launches to date have been from Florida, in part because the physics of launching off the East Coast are better for journeys to other planets. But InSight will break the mold by launching from Vandenberg Air Force Base in California. It will be the first launch to another planet from the West Coast.

InSight will ride on top of a powerful Atlas V 401 rocket, which allows for a planetary trajectory to Mars from either coast. Vandenberg was ultimately chosen because it had more availability during InSight's launch period.

A whole new region will get to see an interplanetary launch when InSight rockets into the sky. In a clear, pre-dawn sky, the launch may be visible in California from Santa Maria to San Diego.

The rocket that will loft InSight beyond Earth will also launch a separate NASA technology experiment: two mini-spacecraft called Mars Cube One, or MarCO. These briefcase-sized CubeSats will fly on their own path to Mars behind InSight.

Their objective is to relay back InSight data as it enters the Martian atmosphere and lands. It will be a first test of miniaturized CubeSat technology at another planet, which researchers hope can offer new capabilities to future missions.

If successful, the MarCOs could represent a new kind of data relay to Earth. InSight's success is independent of its CubeSat tag-alongs.

Mars is home to some impressive volcanic features. That includes Tharsis -- a plateau with some of the biggest volcanoes in the solar system. Heat escaping from deep within the planet drives the formation of these types of features, as well as many others on rocky planets. InSight includes a self-hammering heat probe that will burrow down to 16 feet (5 meters) into the Martian soil to measure the heat flow from the planet's interior for the first time. Combining the rate of heat flow with other InSight data will reveal how energy within the planet drives changes on the surface.

Studying Mars lets us travel to the ancient past. While Earth and Venus have tectonic systems that have destroyed most of the evidence of their early history, much of the Red Planet has remained static for more than 3 billion years. Because Mars is just one-third the size of Earth and Venus, it contains less energy to power the processes that change a planet's structure. That makes it a fossil planet in many ways, with the secrets of our solar system's early history locked deep inside.

Learn more about InSight's mission goals and instrumentation at a live public talk, part of JPL's von Karman lecture series, on Thursday, Feb. 22 at 7 p.m. PST (10 p.m. EST). The event will be streamed live on http://YouTube.com/NASAJPL/live .