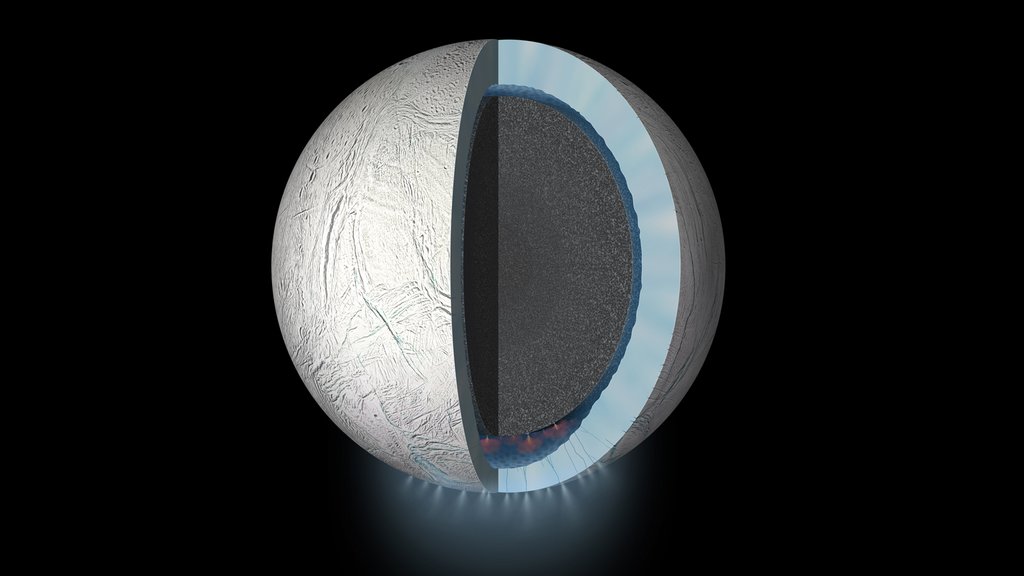 Facts to help you understand what Cassini's upcoming Enceladus flyby is all about.

NASA's Cassini spacecraft will sample the ocean of Saturn's moon Enceladus on Wednesday, Oct. 28, when it flies through the moon's plume of icy spray.

Cassini launched in 1997 and entered orbit around Saturn in 2004. Since then, it has been studying the huge planet, its rings and its magnetic field. Here are some things to know about the mission's upcoming close flyby of Enceladus:

-- Enceladus is an icy moon of Saturn. Early in its mission, Cassini discovered Enceladus has remarkable geologic activity, including a towering plume of ice, water vapor and organic molecules spraying from its south polar region. Cassini later determined the moon has a global ocean and likely hydrothermal activity, meaning it could have the ingredients needed to support simple life.

-- The flyby will be Cassini's deepest-ever dive through the Enceladus plume, which is thought to come from the ocean below. The spacecraft has flown closer to the surface of Enceladus before, but never this low directly through the active plume.

-- The flyby is not intended to detect life, but it will provide powerful new insights about how habitable the ocean environment is within Enceladus.

-- Cassini scientists are hopeful the flyby will provide insights about how much hydrothermal activity -- that is, chemistry involving rock and hot water -- is occurring within Enceladus. This activity could have important implications for the potential habitability of the ocean for simple forms of life. The critical measurement for these questions is the detection of molecular hydrogen by the spacecraft.

-- Scientists also expect to better understand the chemistry of the plume as a result of the flyby. The low altitude of the encounter is, in part, intended to afford Cassini greater sensitivity to heavier, more massive molecules, including organics, than the spacecraft has observed during previous, higher-altitude passes through the plume.

-- The flyby will help solve the mystery of whether the plume is composed of column-like, individual jets, or sinuous, icy curtain eruptions -- or a combination of both. The answer would make clearer how material is getting to the surface from the ocean below.

-- Researchers are not sure how much icy material the plumes are actually spraying into space. The amount of activity has major implications for how long Enceladus might have been active.