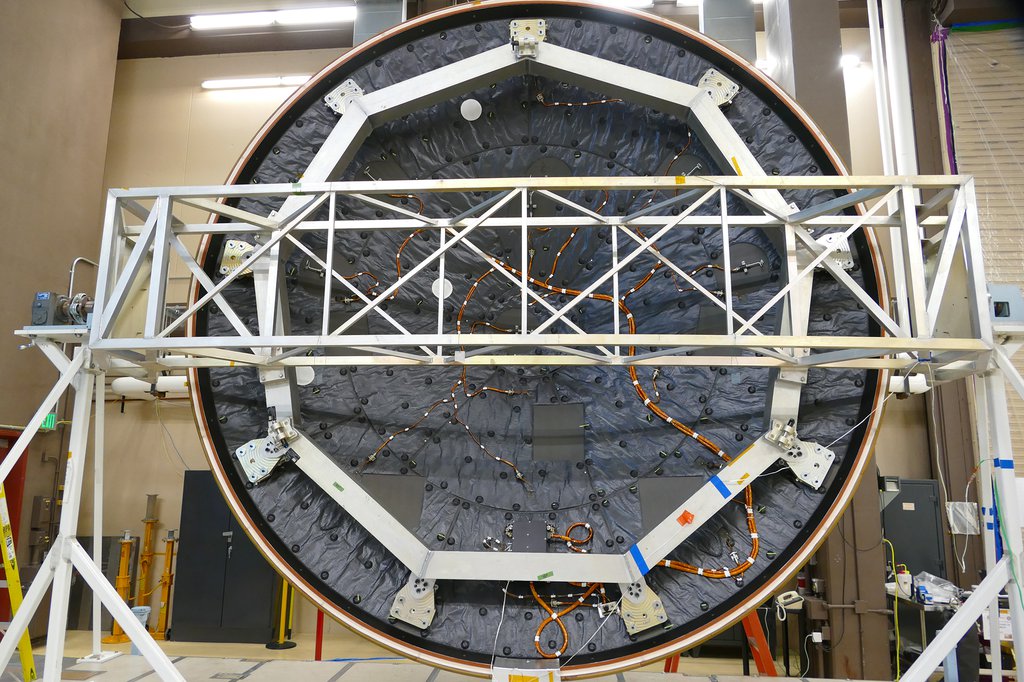 MEDLI2 sensors are installed on the Mars 2020 heat shield and back shell prior that will protect NASA's Perseverance rover on its journey to the surface of Mars.

Technology will collect critical data about the harsh entry environment during Perseverance’s entry next Thursday.

Nearly six-and-a-half months and 300 million miles since launch, NASA’s Perseverance rover will land on Mars Feb. 18, 2021, to begin its robotic exploration of the Red Planet. But before Perseverance touches down on the surface of Mars, it has to achieve a successful entry, descent, and landing (EDL).

Onboard the rover’s protective aeroshell is the Mars Entry, Descent, and Landing Instrumentation 2 (MEDLI2), which will collect critical data about the harsh entry environment during Perseverance’s entry through the planet’s atmosphere. While not used as part of the Mars 2020 controls for this Mars landing, the MEDLI2 data will help improve the designs of entry systems for future robotic and crewed Mars missions.

MEDLI2 includes three types of sensors – thermocouples, heat flux sensors, and pressure transducers – that will measure extreme heat and pressure during entry. It also contains electronics and hardware for recording the thermal and pressure loads experienced during entry and through the parachute deployment. In total, 28 sensors are arranged in a unique pattern across the heat shield and back shell of the Mars 2020 entry vehicle.

The sensors will build on what we already know about the unique heating phenomena on a heat shield, density of the Martian atmosphere, and impact of lower-altitude winds on the entry vehicle’s flight path. MEDLI2 will also provide NASA’s first-ever direct heat measurements experienced by an entry vehicle’s back shell at Mars.

“Recent successful checkouts of our MEDLI2 hardware during the Mars 2020 cruise demonstrates that our system is performing as intended and has survived the initial round of harsh flight environments,” said Henry Wright, MEDLI2 project manager at NASA’s Langley Research Center in Hampton, Virginia. “We are eager for the successful EDL of Mars 2020!”

Perseverance will power on MEDLI2 about five hours before entry to provide sufficient time for the system to warm up and acquire the initial conditions of the entry vehicle. During the final five-hour coast to Mars, MEDLI2 sensor data will be provided to Mars 2020 about every 45 minutes to monitor the health of MEDLI2 and to provide updates of the entry vehicle surface temperatures. About 10 minutes before the atmospheric entry, the Mars 2020 spacecraft will begin collecting continuous MEDLI2 data.

The data will show the increase in heating and pressure as the entry vehicle passes through the atmosphere of Mars. MEDLI2 will keep collecting data after the peak heating (maximum heat shield surface temperature of about 2,300 to 2,400 degrees Fahrenheit, or 1,200 to 1,300 degrees Celsius) and peak pressure. During the final 100 seconds of the entry, the vehicle will be in the supersonic flight phase, where the MEDLI2 pressure transducers collect data as part of the observations of wind speed and direction as well as vehicle performance.

Perseverance will power down MEDLI2 about 10 seconds after the supersonic parachute deploys. Then after another 10 seconds, the heat shield (which carries the MEDLI2 power and data acquisition hardware) will separate from the entry vehicle and fall to the surface of Mars. After the Perseverance rover and the powered descent stage separate from the back shell, the remaining MEDLI2 hardware in the back shell will descend to the surface with the parachute. The powered descent stage will continue its path to Mars and land Perseverance in Jezero Crater. The MEDLI2 data, stored on the Perseverance rover, will be sent back to Earth within about a week of landing.

The MEDLI2 operations team will support the Mars 2020 project during Perseverance’s final approach and entry phases by assessing a subset of the MEDLI2 data as it is returned near real time. This data will provide the first look at the overall entry performance of the vehicle.

“I am proud of the MEDLI2 team,” Wright said. “It isn’t easy developing new, one-of-a-kind space hardware, especially with a fixed delivery date. The team always remained focused on ensuring the MEDLI2 system will perform as intended, despite development setbacks and challenges introduced by the pandemic.”

MEDLI2 is a Game Changing Development Program project. NASA’s Space Technology Mission Directorate funded the technology with support from the Human Exploration and Operations Mission Directorate and Science Mission Directorate. MEDLI2 is managed at NASA’s Langley Research Center in Hampton, Virginia, and implemented in partnership with NASA’s Ames Research Center in California’s Silicon Valley and NASA’s Jet Propulsion Laboratory in Southern California. Langley led the development of the pressure transducers, the data acquisition and signal conditioning electronics, the intra-instrument harnessing, and the systems engineering. Ames led the development of the thermal protection system sensors, the heating sensors, and is the lead for science (principal investigator). JPL, which is managed for NASA by Caltech, led integration of MEDLI2 into the Mars 2020 spacecraft system. JPL also built and manages operations of the Perseverance rover. Lockheed Martin built the heat shield and back shell, and physically integrated the sensors and electronics.