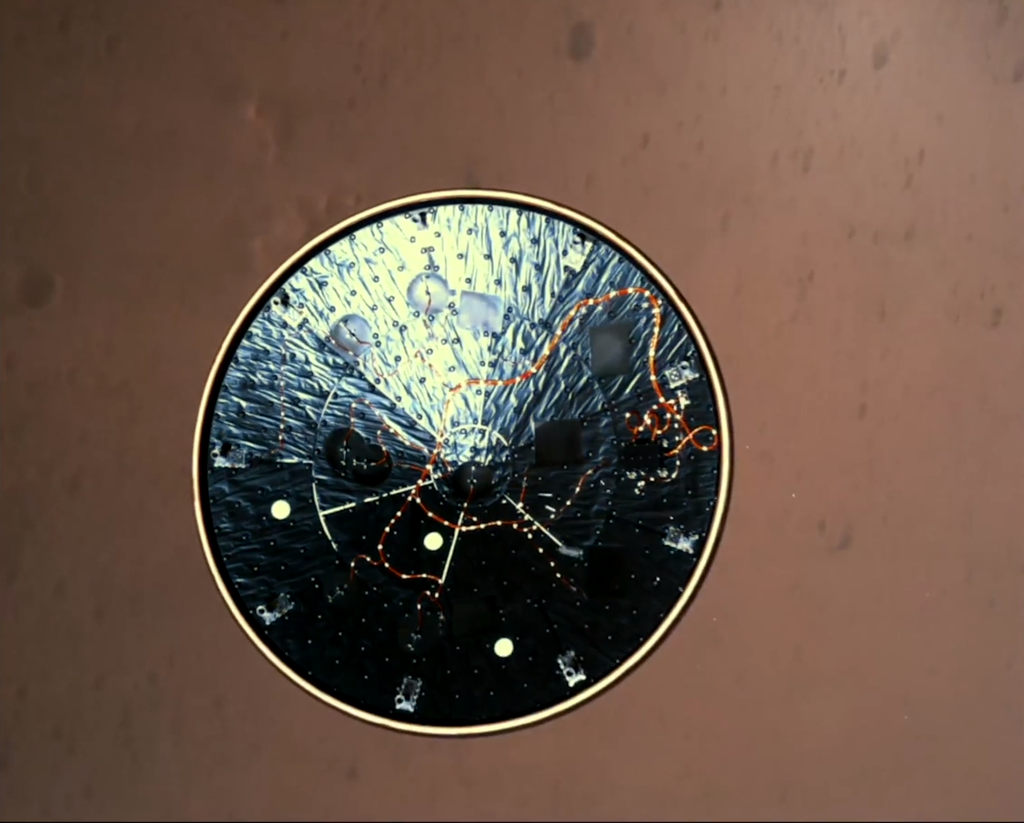 The Mars 2020 spacecraft’s heat shield falls away as the aeroshell descends to Mars on Feb. 18, 2021. The orange cabling seen on the shield is part of a suite of sensors and electronics called MEDLI2, which collects data during the descent that will help engineers land future spacecraft on Mars.

MEDLI2 was one of the crucial technologies onboard the rover’s protective aeroshell that helped document the entry, descent, and landing of the spacecraft.

Editor’s note: This story has been updated and text has been added to the conclusion.

"Tango delta. Touchdown confirmed. Perseverance safely on the surface of Mars, ready to begin seeking the signs of past life.” For more than six years, the Mars Entry, Descent, and Landing Instrumentation 2 (MEDLI2) team waited to hear these words.

NASA’s Perseverance rover successfully landed Feb. 18, 2021, beginning its robotic exploration of the Red Planet. MEDLI2 was one of the crucial technologies on the rover’s protective aeroshell that helped document the entry, descent, and landing (EDL) of the spacecraft. All of the MEDLI2 data was stored on Perseverance for transmission to Earth after a successful landing.

MEDLI2’s role was to collect critical data about the harsh environment during Perseverance’s entry through the planet’s atmosphere. It included three types of sensors – thermocouples, heat flux sensors, and pressure transducers – that measured extreme heat and pressure during entry. It also contained electronics and hardware for recording the thermal and pressure loads experienced during entry and through the parachute deployment.

MEDLI2 used its measurements to determine the heating and atmospheric forces that occurred on the heat shield and back shell. Together, these two components make up the aeroshell, which housed and protected the Perseverance rover during the cruise to Mars and EDL.

MEDLI2 was powered on five hours before the “7 Minutes of Terror,” or final 7-minute descent to Mars. This provided time for MEDLI2’s electronics to stabilize temperature and measure the initial conditions prior to entry. The team was relieved to receive the indication that MEDLI2 was successfully activated. The team continued to monitor the incoming data throughout this five-hour coast phase prior to entry.

The majority of the MEDLI2 sensors and the primary electronics were mounted on the Mars 2020 heat shield. About 10 seconds after the supersonic parachute deployed, MEDLI2 was powered down for the last time as it had completed its job. Since it is critical for the heat shield to be separated to allow the Perseverance rover to be extracted from the entry vehicle, it was required that MEDLI2 be turned off a few seconds before the separation to prevent any electrical power issues. The harness connecting the heat shield and back shell was then severed by the firing of a pyro-cutter, and the heat shield was dropped.

“We didn’t find any issues with the separation,” said Henry Wright, MEDLI2 project manager at NASA’s Langley Research Center in Hampton, Virginia. “The heat shield cleanly separated from the Mars 2020 entry vehicle. The MEDLI2 hardware was clearly visible on the heat shield as it fell toward the surface of Mars. Job well done!”

Perseverance also returned “critical event data” in real time during the EDL. It included a subset of the MEDLI2 data which allowed observations into what the entry vehicle was experiencing as the entry was happening. Three days after Perseverance’s successful landing, the remaining MEDLI2 data was transmitted back to Earth, and the next phase of the project began: data analysis and performance reconstruction.

“The returned data is fascinating. It’s like having a bird’s eye view of what’s happening to the aeroshell as it flies through Martian skies. The MEDLI2 sensor signals are so clear we could immediately pick out interesting phenomenon and crucial events” said Todd White, MEDLI2 principal investigator at NASA’s Ames Research Center in California’s Silicon Valley.

Data collected from MEDLI2 also provides measurements that will be used to determine the properties of the atmosphere the Mars 2020 entry vehicle flew through. MEDLI2 provides essential EDL observation data to understand how much margin remained on the Perseverance entry along with data that will be used to improve prediction models and tools for future missions.

Taking a Deeper Look Into the Data

MEDLI2 also used its embedded thermocouples to determine how much of the heat shield protective insulation may have burned away or ablated. All of the thermocouples survived the entry heating pulse, indicating the heat shield ablation was very low. This observation could be used to reevaluate the amount of insulation that is needed on a heat shield to potentially reduce the overall entry vehicle mass.

Surface pressures were also measured throughout the same phase with a peak surface pressure of the heat shield matching the team’s entry predictions. MEDLI2 picked different sensors to focus on accurately capturing different flight regimes. One sensor covered the complete range of the maximum surface pressures. The remaining six heat shield pressure measurements had a range to more accurately capture the conditions during the supersonic flight regime (from about five times the speed of sound on Mars through the deployment of the supersonic parachute). These sensors, combined with onboard inertial measurements, allows additional insight into how the entry vehicle performs when the impacts of atmospheric density variations and winds are more pronounced. The MEDLI2 pressure data will be used to improve the modeling approach for future EDL missions.

The MEDLI2 team will continue to analyze the data for the next six months, refining NASA’s understanding of the Mars atmosphere, the extreme conditions of entry, and how well the Mars 2020 aeroshell protected the rover. These lessons will be immediately useful for the next Mars missions, and even missions headed for Titan.