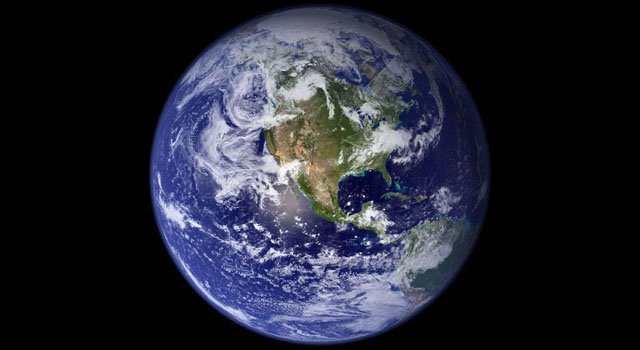 People around the world will soon get to see their home planet in an entirely new way, as NASA extends the release of detailed topographical maps collected during the 2000 Shuttle Radar Topography Mission beyond U.S. borders to the rest of the globe.

People around the world will soon get to see their home planet in an entirely new way, as NASA extends the release of detailed topographical maps collected during the 2000 Shuttle Radar Topography Mission beyond U.S. borders to the rest of the globe. NASA's Jet Propulsion Laboratory, Pasadena, Calif., manages the mission for NASA's Earth Science Enterprise.

NASA and the National Imagery and Mapping Agency, partners in the shuttle mapping mission, agreed this week on a policy to provide 90-meter (295-foot) resolution digital-elevation mission data from sites outside the United States to qualified researchers. Selected data will simultaneously become available to the public. The two agencies also this week made public the mission's research-quality 30-meter (98-foot) resolution topographic data for the entire continental United States.

"Americans take for granted the quality of U.S. topographic maps, but for millions of people around the world, particularly those in the frequently cloud-covered equatorial regions, the elevation maps created with these data will be ten times more precise than the best available today," Administrator O'Keefe said. "That kind of improvement will lead to significant advancements in aviation safety and mitigation of natural hazards, and to smarter and more sustainable urban development, to name but a few applications."

"The Shuttle Radar Topography Mission is one of the best geospatial collection tools not only in the National Imagery and Mapping Agency's experience, but in the history of mapping," said Clapper. "This mission helps meet our strategic goal of providing the best geospatial information to our customers.

"For commercial and civil applications, the improved data is likely to find many uses that will save lives and enhance economic development around the world. Our team effort with NASA is a shining example of how we can adapt available technology, in partnership with other federal agencies and civilian contractors, to get world-class information."

The practical benefits of space-based synthetic-aperture radar data, which can see through clouds and provide researchers with terrain data of exceptional quality, can be applied to uses as diverse as flood plain mapping and location of cellular telephone towers in mountainous regions.

"Take aviation safety, for example. Today, more than 60 percent of fatal aviation accidents involve controlled flight into terrain due to poor visibility. By combining Shuttle Radar Topography Mission and Global Positioning System data, we can create a global terrain database and high-fidelity cockpit visualizations that will virtually display surrounding terrain, even in conditions of darkness or clouds. NASA is working with the Federal Aviation Administration, the aviation industry and the Department of Defense to develop these technologies, which promise to significantly reduce the aviation accident rate worldwide," said Dr. Ghassem Asrar, associate administrator for earth science, NASA Headquarters.

Shuttle Radar Topography Mission data are being processed at JPL into research-quality digital-elevation models, one continent at a time. When each continent is completed, the data will be sent to the National Imagery and Mapping Agency for additional finishing and then to the U.S. Geological Survey's Earth Resources Observation Systems Data Center in Sioux Falls, S.D., for final archiving and distribution.

NASA is processing mission data for research purposes in response to requests from NASA principal investigators and other qualified scientists. Under the terms of the new agreement, researchers will submit their requests for international topography data to NASA/JPL. The requests will be reviewed by NASA and the National Imagery and Mapping Agency, and the data will be released either for use by the approved researchers or for broad public access. Decisions on how data will be released will be made on a case-by-case basis.

NASA began processing mission data in April 2002 and expects to have all mission data processed and delivered to the National Imagery and Mapping Agency by the end of this year. All international 90-meter (295-foot) resolution data is expected to be available to the public no later than two years after JPL makes its final data delivery.

Still in discussion is a release policy for international 30-meter (98-foot) resolution measurements. However, at the National Imagery and Mapping Agency's discretion, some 30-meter resolution international data may be made available in special situations in which the information can help protect life and property, such as during volcanic eruptions and floods; NASA, however, will have access to such data for its sponsored scientific research.

The Shuttle Radar Topography Mission (Feb. 11-22, 2000) made 3-D measurements of more than 80 percent of Earth's landmass between 60 degrees north and 56 degrees south of the equator, areas home to nearly 95 percent of the world's population.

For more information on the Shuttle Radar Topography Mission, visit:

JPL is a division of the California Institute of Technology, also in Pasadena.