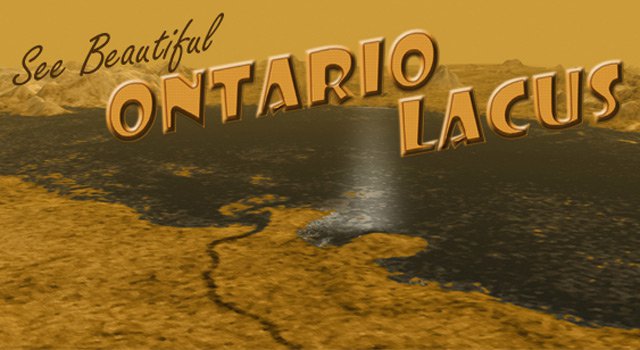 NASA's Cassini spacecraft takes us on a guided tour of this mysterious lake on Titan. › See flyover animation 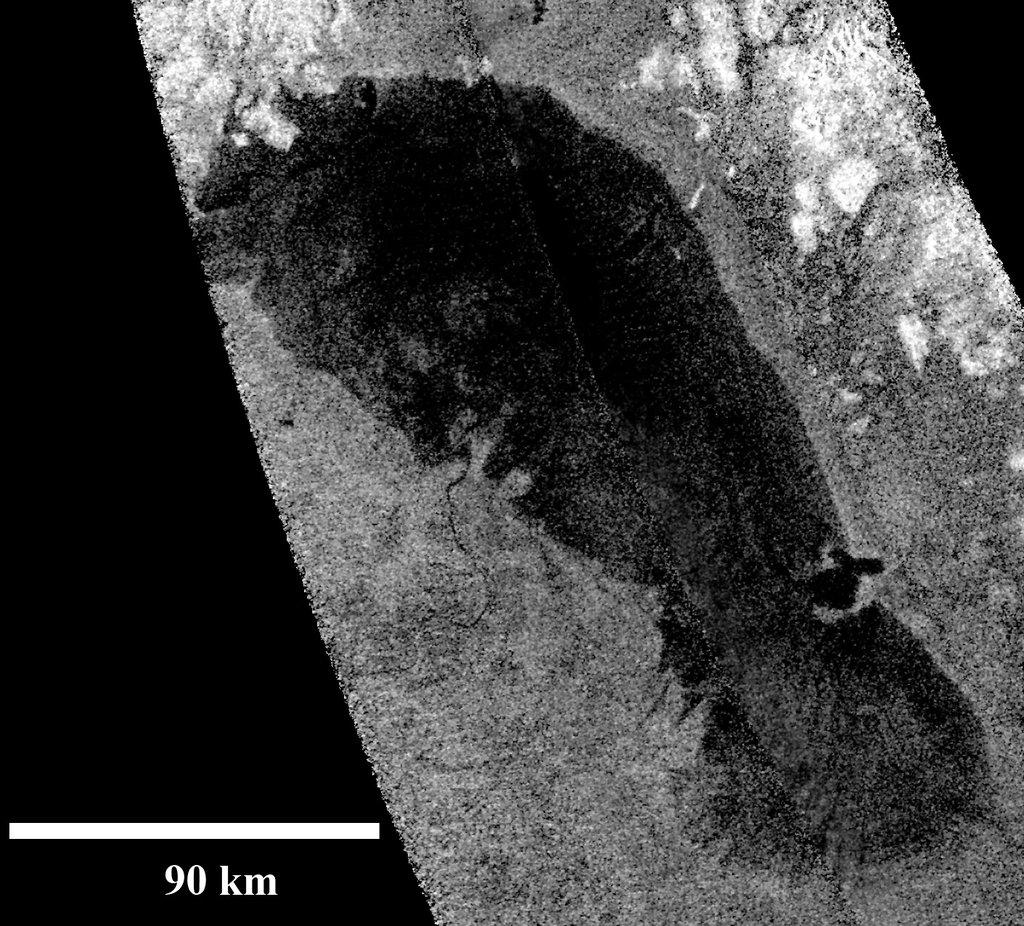 This image of Ontario Lacus, the largest lake on the southern hemisphere of Saturn's moon Titan, was obtained by NASA's Cassini spacecraft on Jan. 12, 2010.
Credit: NASA/JPL-Caltech

This lake on Saturn's moon Titan turns out to be a perfect exotic vacation spot, provided you can handle subzero temperatures and enjoy soaking in liquid hydrocarbon.

Ontario Lacus, the largest lake in the southern hemisphere of Saturn's moon Titan, turns out to be a perfect exotic vacation spot, provided you can handle the frosty, subzero temperatures and enjoy soaking in liquid hydrocarbon.

Several recent papers by scientists working with NASA's Cassini spacecraft describe evidence of beaches for sunbathing in Titan's low light, sheltered bays for mooring boats, and pretty deltas for wading out in the shallows. They also describe seasonal changes in the lake's size and depth, giving vacationers an opportunity to visit over and over without seeing the same lake twice. (Travel agents, of course, will have to help you figure out how to breathe in an atmosphere devoid of oxygen.)

Using data that give us the most detailed picture yet of a lake on another world, scientists and animators have collaborated on a new video tour of Ontario Lacus based on radar data from Cassini's Titan flybys on June 22, 2009, July 8, 2009, and Jan. 12, 2010. A Web video explaining how scientists look to Earth's Death Valley to understand places like Titan's Ontario Lacus is available at: http://www.jpl.nasa.gov/video/index.cfm?id=913.

"With such frigid temperatures and meager sunlight, you wouldn't think Titan has a lot in common with our own Earth," said Steve Wall, deputy team lead for the Cassini radar team, based at NASA's Jet Propulsion Laboratory in Pasadena, Calif. "But Titan continues to surprise us with activity and seasonal processes that look marvelously, eerily familiar."

Titan is the only other world in our solar system known to have standing bodies of liquid on its surface. Because surface temperatures at the poles average a chilly 90 Kelvin (about minus 300 degrees Fahrenheit), the liquid is a combination of methane, ethane and propane, rather than water. Ontario Lacus has a surface area of about 15,000 square kilometers (6,000 square miles), slightly smaller than its terrestrial namesake Lake Ontario.

Cassini first obtained an image of Ontario Lacus with its imaging camera in 2004. A paper submitted to the journal Icarus by Alex Hayes, a Cassini radar team associate at the California Institute of Technology in Pasadena, and colleagues finds that the lake's shoreline has receded by about 10 kilometers (6 miles). This has resulted in a liquid level reduction of about 1 meter (3 feet) per year over a four-year period.

The shoreline appears to be receding because of liquid methane evaporating from the lake, with a total amount of evaporation that would significantly exceed the yearly methane gas output of all the cows on Earth, Hayes said. Some of the liquid could also seep into porous ground material. Hayes said the changes in the lake are likely occurring as part of Titan's seasonal methane cycle, and would be expected to reverse during southern winter.

This seasonal filling and receding is similar to what occurs at the shallow lakebed known as Racetrack Playa in Death Valley National Park, Hayes said. In fact, from the air, the topography and shape of Racetrack Playa and Ontario Lacus are quite similar, although Ontario Lacus is about 60 times larger.

"We are very excited about these results, because we did not expect Cassini to be able to detect changes of this magnitude in Titan's lakes," Hayes said. "It is only through the continued monitoring of seasonal variation during Cassini's extended mission that these discoveries have been made possible."

Other parts of the Ontario Lacus' shoreline, as described in the paper published in Geophysical Research Letters in March 2010 by Wall, Hayes and other colleagues, show flooded valleys and coasts, further proof that the lake level has changed.

The delta revealed by Cassini radar data on the western shore of Ontario Lacus is also the first well-developed delta observed on Titan, Wall said. He explained that the shape of the land there shows liquid flowing down from a higher plain switching channels on its way into the lake, forming at least two lobes.

Examples of this kind of channel switching and wave-modified deltas can be found on Earth at the southern end of Lake Albert between Uganda and the Democratic Republic of Congo in Africa, and the remains of an ancient lake known as Megachad in the African country Chad, Wall said.

The radar data also show a smooth beach on the northwestern shore of Ontario Lacus. Smooth lines parallel to the current shoreline could be formed by low waves over time, which were likely driven by winds sweeping in from the west or southwest. The pattern at Ontario Lacus resembles what might be seen on the southeastern side of Lake Michigan, where waves sculpt the shoreline in a similar fashion.

"Cassini continues to take our breath away as it fills in the details on the surfaces of these far-off moons," said Linda Spilker, Cassini project scientist based at JPL. "It's exhilarating to ride along as it takes us on the ultimate cold-weather adventure."