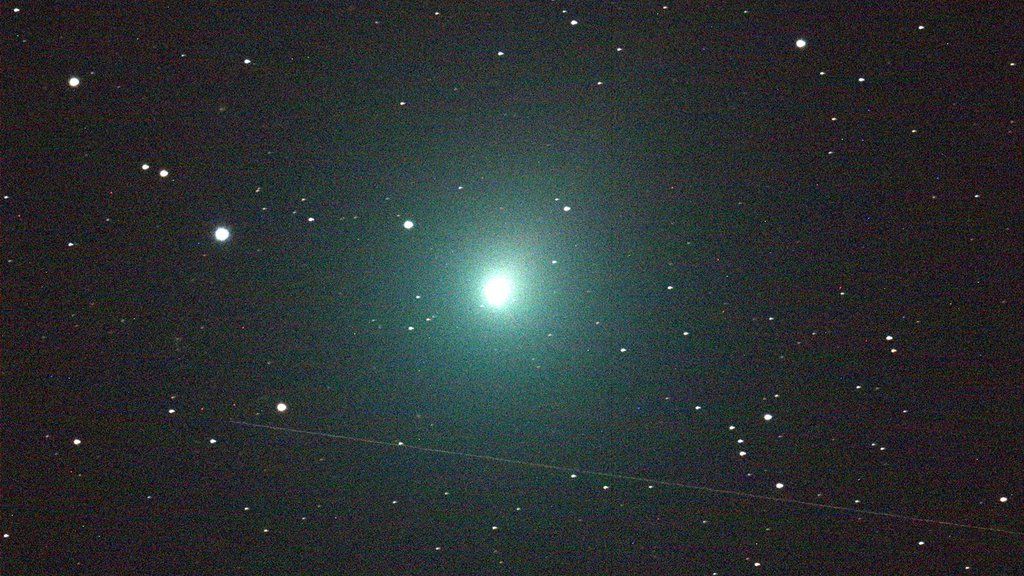 This 120 second image of the comet was taken Dec. 2 by an iTelescope 50 mm refractor located at an observatory near Mayhill, New Mexico. The streak below the comet was produced by a rocket body (upper stage) passing through the telescope's field of view during the exposure.
Credit: NASA

On Sunday comet Wirtanen will make one of the 10 closest flybys of Earth in more than 70 years.

On Sunday, Dec. 16, the comet known as 46P/Wirtanen will make one of the 10 closest comet flybys of Earth in 70 years, and you may even be able to see it without a telescope.

Although the approach will be a distant 7.1 million miles (11.4 million kilometers, or 30 lunar distances) from Earth, it's still a fairly rare opportunity. "This will be the closest comet Wirtanen has come to Earth for centuries and the closest it will come to Earth for centuries," said Paul Chodas, manager of the Center for Near-Earth Object Studies at NASA's Jet Propulsion Laboratory in Pasadena, California. What's more, Chodas said, "This could be one of the brightest comets in years, offering astronomers an important opportunity to study a comet up close with ground-based telescopes, both optical and radar."

Comet Wirtanen has already been visible in larger amateur telescopes, and while the brightness of comets is notoriously difficult to predict, there is the possibility that during its close approach comet Wirtanen could be visible with binoculars or to the naked eye.

Astronomer Carl Wirtanen discovered the comet in 1948 at Lick Observatory on Mt. Hamilton in Santa Clara County, California. With a width of 0.7 miles (1.1 kilometers), 46P/Wirtanen orbits the Sun fairly quickly for a comet - once every 5.4 years - making it a short-period comet. (Long-period comets, on the other hand, have orbital periods greater than 200 years.) At the time of closest approach, the comet will appear to be located in the constellation Taurus close to the Pleiades.

An observation campaign is underway to take advantage of the close approach for detailed scientific study of the properties of this "hyperactive" comet, which emits more water than expected, given its relatively small nucleus. The campaign, led by the University of Maryland, has worldwide participation across the professional and amateur astronomical communities. NASA-sponsored ground, air and space-based observatories getting in on the action include NASA's Goldstone Solar System Radar in California; the NASA Infrared Telescope Facility on Maunakea, Hawaii; the Hubble, Chandra, Swift and Spitzer space telescopes; and an airborne observatory known as the Stratospheric Observatory for Infrared Astronomy (SOFIA). The comet will even pass through the observing field of the Transiting Exoplanet Survey Satellite (TESS).

Amateur imagery is available on multiple websites, including:

A NASA ScienceCast on Comet Wirtanen is available at:

JPL hosts the Center for Near-Earth Object Studies (CNEOS) for NASA's Near-Earth Object Observations Program, an element of the Planetary Defense Coordination Office within the agency's Science Mission Directorate. Along with the resources NASA puts into understanding asteroids and comets, the Planetary Defense Coordination Office partners with other U.S. government agencies, university-based astronomers and space science institutes across the country. It also collaborates with international space agencies and institutions that are working to track and better understand these smaller objects of the solar system. In addition, NASA values the work of numerous highly skilled amateur astronomers, whose accurate observational data help improve comet and asteroid orbits after discovery.