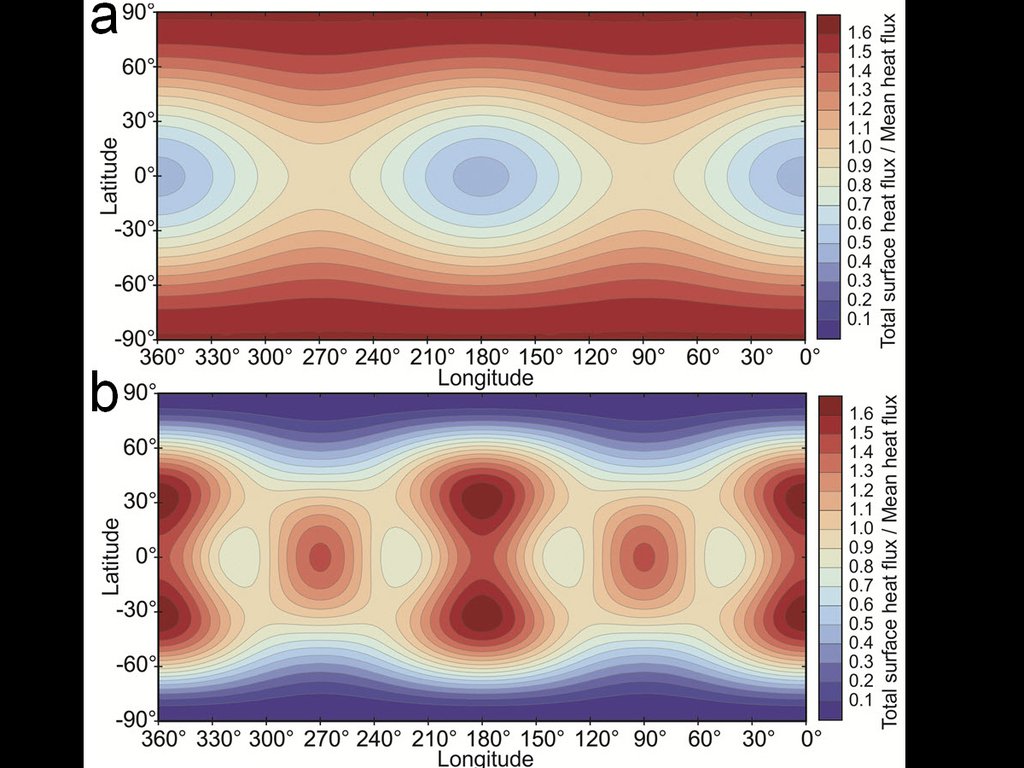 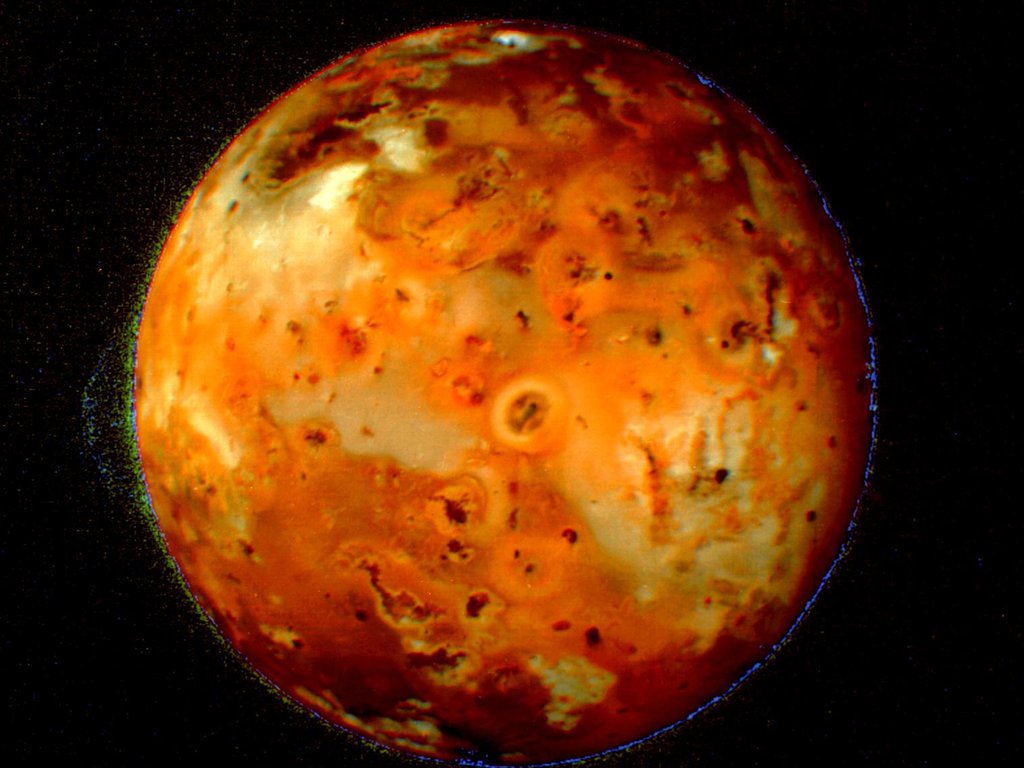 Io's volcanos continually resurface it, so that any impact craters have disappeared.› Full image and caption
Credit: NASA/JPL 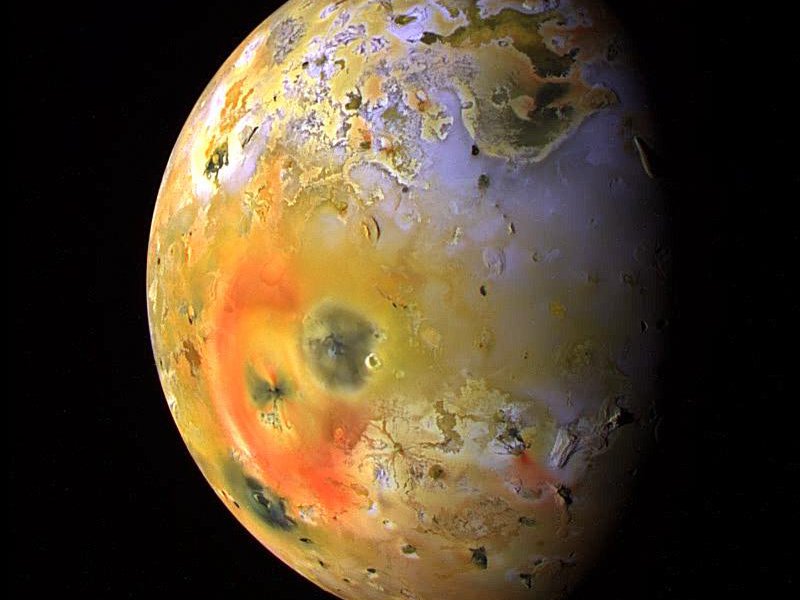 This global view of Jupiter's moon, Io, was obtained during the tenth orbit of Jupiter by NASA's Galileo spacecraft.› Full image and caption
Credit: NASA/JPL/University of Arizona 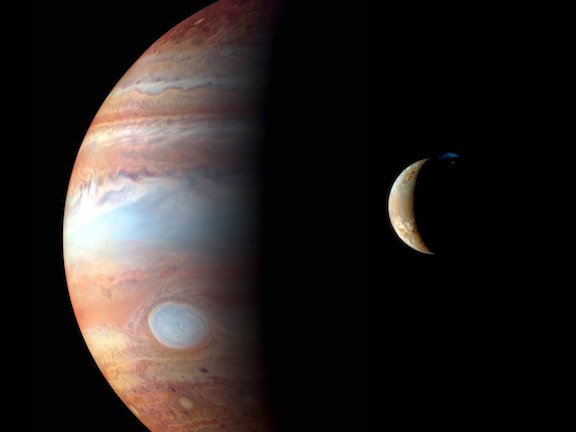 Jupiter's moon Io is the most volcanically active world in the solar system, with hundreds of volcanoes, some erupting lava fountains up to 250 miles high (about 400 kilometers). However, concentrations of volcanic activity are significantly displaced from where they are expected to be, based on models that predict how the moon's interior is heated, according to NASA and European Space Agency researchers.

The team, which includes Rosaly Lopes of NASA's Jet Propulsion Laboratory, Pasadena, Calif., primarily used data from NASA's Voyager and Galileo missions. The new paper also analyzes data from other spacecraft and ground-based telescopes, but much of what scientists know about Io's surface comes from these two missions. Voyager, still being managed by JPL, discovered Io's volcanoes in 1979, making that moon the only body in the solar system other than Earth known to have active magma volcanoes. Galileo, which was also a JPL mission, flew by Io in 1999 and 2000.

Io is caught in a tug-of-war between Jupiter's massive gravity and the smaller but precisely timed pulls from two neighboring moons that orbit farther from Jupiter -- Europa and Ganymede. Io orbits faster than these other moons, completing two orbits every time Europa finishes one, and four orbits for each one Ganymede makes. This regular timing means that Io feels the strongest gravitational pull from its neighboring moons in the same orbital location, which distorts Io's orbit into an oval shape. This, in turn, causes Io to flex as it moves around Jupiter.

For example, as Io gets closer to Jupiter, the giant planet's powerful gravity deforms the moon toward it, and then, as Io moves farther away, the gravitational pull decreases and the moon relaxes. The flexing from gravity causes tidal heating. In the same way that you can heat up a spot on a wire coat hanger by repeatedly bending it, the flexing creates friction in Io's interior, which generates the tremendous heat that powers the moon's extreme volcanism.

The question remains regarding exactly how this tidal heating affects the moon's interior. Some propose it heats up the deep interior, but the prevailing view is that most of the heating occurs within a relatively shallow layer under the crust, called the asthenosphere. The asthenosphere is where rock behaves like putty, slowly deforming under heat and pressure.

"Our analysis supports the prevailing view that most of the heat is generated in the asthenosphere, but we found that volcanic activity is located 30 to 60 degrees east from where we expect it to be," said Christopher Hamilton of the University of Maryland, College Park. Hamilton, who is stationed at NASA's Goddard Space Flight Center in Greenbelt, Md., is lead author of a paper about this research published Jan. 1 in Earth and Planetary Science Letters.

Hamilton and his team performed the spatial analysis using a new, global geologic map of Io, produced by David Williams of Arizona State University, Tempe, Ariz., and his colleagues. The map provides the most comprehensive inventory of Io's volcanoes to date, thereby enabling patterns of volcanism to be explored in unprecedented detail. Assuming that the volcanoes are located above where the most internal heating occurs, the team tested a range of interior models by comparing observed locations of volcanic activity to predicted tidal heating patterns.

"We performed the first rigorous statistical analysis of the distribution of volcanoes in the new global geologic map of Io," said Hamilton. "We found a systematic eastward offset between observed and predicted volcano locations that can't be reconciled with any existing solid body tidal heating models."

Possibilities to explain the offset include a faster than expected rotation for Io; an interior structure that permits magma to travel significant distances from where the most heating occurs to the points where it is able to erupt on the surface; or a missing component in existing tidal heating models, like fluid tides from an underground magma ocean, according to the team.

Galileo's magnetometer instrument detected a magnetic field around Io, suggesting the presence of a global subsurface magma ocean. As Io orbits Jupiter, it moves inside the planet's vast magnetic field. Researchers think this could induce a magnetic field in Io if it had a global ocean of electrically conducting magma.

"Our analysis supports a global subsurface magma ocean scenario as one possible explanation for the offset between predicted and observed volcano locations on Io," says Hamilton. "However, Io's magma ocean would not be like the oceans on Earth. Instead of being a completely fluid layer, Io's magma ocean would probably be more like a sponge with at least 20 percent silicate melt within a matrix of slowly deformable rock."

Tidal heating is also thought to be responsible for oceans of liquid water likely to exist beneath the icy crusts of Europa and Saturn's moon Enceladus. Since liquid water is a necessary ingredient for life, some researchers propose that life might exist in these subsurface seas if a useable energy source and a supply of raw materials are present, as well. These worlds are far too cold to support liquid water on their surfaces, so a better understanding of how tidal heating works may reveal how it could sustain life in otherwise inhospitable places throughout the universe.

"The unexpected eastward offset of the volcano locations is a clue that something is missing in our understanding of Io," said Hamilton. "In a way, that's our most important result. Our understanding of tidal heat production and its relationship to surface volcanism is incomplete. The interpretation for why we have the offset and other statistical patterns we observed is open, but I think we've enabled a lot of new questions, which is good."

Io's volcanism is so extensive that it gets completely resurfaced about once every million years or so, actually quite fast compared to the 4.5-billion-year age of the solar system. So to know more about Io's past, we have to understand its interior structure better, because its surface is too young to record its full history, according to Hamilton.

The research was funded by NASA, the NASA Postdoctoral Program, administered by Oak Ridge Associated Universities, and the European Space Agency.

The Galileo mission was managed by NASA's Jet Propulsion Laboratory in Pasadena, Calif., for the agency's Science Mission Directorate in Washington. The Voyager spacecraft were built and continue to be operated by JPL for NASA. The Voyager missions are a part of NASA's Heliophysics System Observatory, sponsored by the Heliophysics Division of the Science Mission Directorate at NASA Headquarters. JPL is a division of the California Institute of Technology in Pasadena.