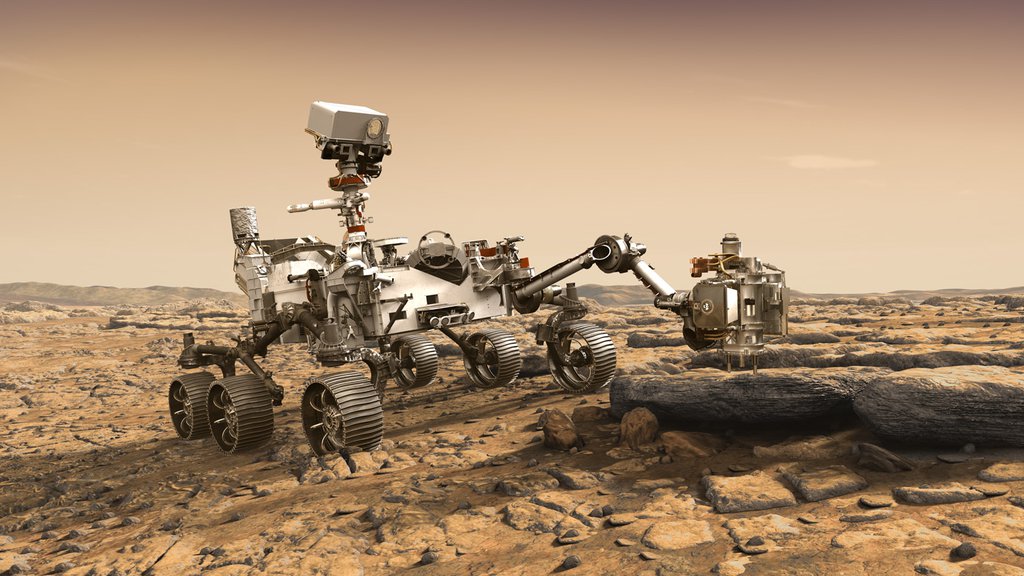 Hundreds of scientists and Mars-exploration enthusiasts gather this week to present, discuss and deliberate the future landing site for NASA's next Red Planet rover - Mars 2020.

Hundreds of scientists and Mars-exploration enthusiasts will convene in a hotel ballroom just north of Los Angeles later this week to present, discuss and deliberate the future landing site for NASA's next Red Planet rover - Mars 2020. The three-day workshop is the fourth and final in a series designed to ensure NASA receives the broadest range of data and opinion from the scientific community before the agency chooses where to send the new rover.

The Mars 2020 mission is tasked with not only seeking signs of habitable conditions on Mars in the ancient past, but also searching for signs of past microbial life. The landing site for Mars 2020 is of great interest to the planetary community because, among the rover's new medley of science gear for surface exploration, it carries a sample system that will collect rock and soil samples and set them aside in a "cache" on the surface of Mars. A future mission could potentially return these samples to Earth. The next Mars landing, after Mars 2020, could very well be a vehicle that would retrieve these Mars 2020 samples.

"The Mars 2020 landing site could set the stage for Mars exploration for the next decade," said Thomas Zurbuchen, Associate Administrator of the Science Mission Directorate at NASA Headquarters in Washington. "I'm looking forward to the spirited debate and critical input from the science and engineering community. Once returned to Earth, these samples will likely become the most analyzed soil samples in history, as they promise to address some very tantalizing questions driving NASA's Science program."

"We have been doing these workshops in support of 2020 landing site selection since 2014," said Matt Golombek, cochair of the Mars Landing Site Steering Committee from NASA's Jet Propulsion Laboratory in Pasadena, California. "At our first workshop, we started with about 30 candidate landing sites, and after additional orbital imaging and a second landing site workshop, we had a recommendation of eight sites to move forward for further evaluation. There were so many great locations to choose from, the whittling-down process was tough. This time around, with four finalists, it promises to be even more difficult. Each site has its own intriguing science potential and knowledgeable advocates."

Champions for four landing options will take their turn at the podium, presenting and defending their favorite parcel on the Red Planet. It is one more site than was expected after the completion of the third workshop, in 2017, where three locations on Mars were recommended for consideration - Columbia Hills, Jezero Crater and Northeast Syrtis.

"At the end of the workshop in February of 2017, there were only three sites on our radar as potential Mars 2020 landing locations," said Ken Farley, project scientist of Mars 2020 at JPL. "But in the ensuing months, a proposal came forward for a landing site that is in between Jezero and Northeast Syrtis. Our goal is to get to the right site that provides the maximum science for Mars 2020, and this new site - dubbed 'Midway' - was viewed as worthy of being included in the discussions."

On the final day, after all presentations have concluded, workshop participants will weigh the positives and negatives of each site. The results of these deliberations will be provided to the Mars 2020 Project, which will incorporate them into a recommendation to NASA Headquarters in Washington, where final selection will be made. The announcement of the Mars 2020 landing site is expected to come by the end of the year.

"I have attended all the workshops so far, and none have disappointed when it comes to intelligent advocation and lively debate," said Farley. "But this is what science is all about - the cogent and respectable exchange of ideas. The passion of the participants shows just how much they care about Mars exploration. They know they are playing a key role in the process, and they know how important the landing site for Mars 2020 will be."

Mars 2020 will launch on a United Launch Alliance (ULA) Atlas V rocket from Space Launch Complex 41 at Cape Canaveral Air Force Station in Florida in July 2020. It is expected to reach Mars in February 2021.

The rover will conduct geological assessments of its landing site on Mars, determine the habitability of the environment, search for signs of ancient Martian life, and assess natural resources and hazards for future human explorers. Scientists will use the instruments aboard the rover to identify and collect samples of rock and soil, encase them in sealed tubes and leave them on the planet's surface for potential return to Earth on a future Mars mission.

For more information on the workshop, go to:

For information on how to listen in to workshop presentations, go to: