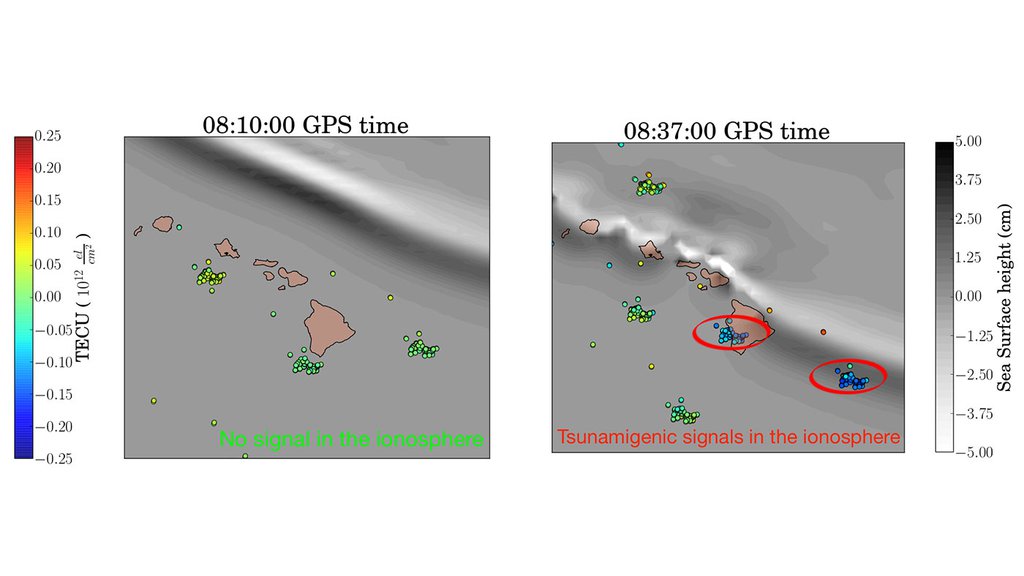 Real-time detection of perturbations of the ionosphere caused by the Oct. 27, 2012, Queen Charlotte Island tsunami off the coast of British Columbia, Canada, using the VARION algorithm.
Credit: Sapienza University/NASA-JPL/Caltech

Animation of Oct. 27, 2012, Queen Charlotte Island tsunami as it crossed Hawaii. As the wave (dark blue/white lines approaching from the northeast) moved, it perturbed the atmosphere and changed the density of ionospheric electrons as reflected by navigation satellite signal changes (colored dots).
Credit: Sapienza University/NASA-JPL/Caltech

A team of scientists has developed a new approach to assist in development of timely tsunami detection systems, using measurements of how tsunamis disturb Earth's atmosphere.

A team of scientists from Sapienza University in Rome, Italy, and NASA's Jet Propulsion Laboratory in Pasadena, California, has developed a new approach to assist in the ongoing development of timely tsunami detection systems, based upon measurements of how tsunamis disturb a part of Earth's atmosphere.

The new approach, called Variometric Approach for Real-time Ionosphere Observation, or VARION, uses observations from GPS and other global navigation satellite systems (GNSS) to detect, in real time, disturbances in Earth's ionosphere associated with a tsunami. The ionosphere is the layer of Earth's atmosphere located from about 50 to 621 miles (80 to 1,000 kilometers) above Earth's surface. It is ionized by solar and cosmic radiation and is best known for the aurora borealis (northern lights) and aurora australis (southern lights).

When a tsunami forms and moves across the ocean, the crests and troughs of its waves compress and extend the air above them, creating motions in the atmosphere known as internal gravity waves. The undulations of internal gravity waves are amplified as they travel upward into an atmosphere that becomes thinner with altitude. When the waves reach an altitude of between 186 to 217 miles (300 to 350 kilometers), they cause detectable changes to the density of electrons in the ionosphere. These changes can be measured when GNSS signals, such as those of GPS, travel through these tsunami-induced disturbances.

VARION was designed under the leadership of Sapienza's Mattia Crespi. The main author of the algorithm is Giorgio Savastano, a doctoral student in geodesy and geomatics at Sapienza and an affiliate employee at JPL, which conducted further development and validation of the algorithm. The work was outlined recently in a Sapienza- and NASA-funded study published in Nature's Scientific Reports journal.

In 2015, Savastano was awarded a fellowship by Consiglio Nazionale degli Ingegneri (CNI) and Italian Scientists and Scholars in North America Foundation (ISSNAP) for a two-month internship at JPL, where he joined the Ionospheric and Atmospheric Remote Sensing Group under the supervision of Attila Komjathy and Anthony Mannucci.

"VARION is a novel contribution to future integrated operational tsunami early warning systems," said Savastano. "We are currently incorporating the algorithm into JPL's Global Differential GPS System, which will provide real-time access to data from about 230 GNSS stations around the world that collect data from multiple satellite constellations, including GPS, Galileo, GLONASS and BeiDou." Since significant tsunamis are infrequent, exercising VARION using a variety of real-time data will help validate the algorithm and advance research on this tsunami detection approach.

Savastano says VARION can be included in design studies for timely tsunami detection systems that use data from a variety of sources, including seismometers, buoys, GNSS receivers and ocean-bottom pressure sensors.

Once an earthquake is detected in a specific location, a system could begin processing real-time measurements of the distribution of electrons in the ionosphere from multiple ground stations located near the quake's epicenter, searching for changes that may be correlated with the expected formation of a tsunami. The measurements would be collected and processed by a central processing facility to provide risk assessments and maps for individual earthquake events. The use of multiple independent data types is expected to contribute to the system's robustness.

"We expect to show it is feasible to use ionospheric measurements to detect tsunamis before they impact populated areas," said Komjathy. "This approach will add additional information to existing systems, complementing other approaches. Other hazards may also be targeted using real-time ionospheric observations, including volcanic eruptions or meteorites."

Observing the ionosphere, and how terrestrial weather below it interfaces with space above, continues to be an important focus for NASA. Two new missions -- the Ionospheric Connection Explorer and the Global-scale Observations of the Limb and Disk -- are planned to launch by early 2018 to observe the ionosphere, which should ultimately improve a wide array of models used to protect humans on the ground and satellites in space.