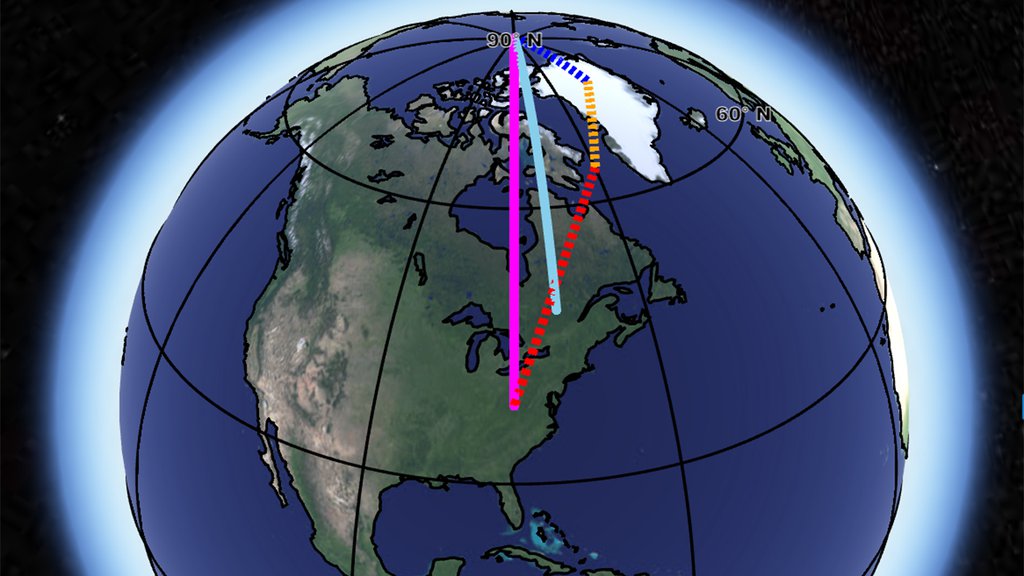 A typical desk globe is designed to be a geometric sphere and to rotate smoothly when you spin it. Our actual planet is far less perfect -- in both shape and in rotation.

Earth is not a perfect sphere. When it rotates on its spin axis -- an imaginary line that passes through the North and South Poles -- it drifts and wobbles. These spin-axis movements are scientifically referred to as "polar motion." Measurements for the 20th century show that the spin axis drifted about 4 inches (10 centimeters) per year. Over the course of a century, that becomes more than 11 yards (10 meters).

"The traditional explanation is that one process, glacial rebound, is responsible for this motion of Earth's spin axis. But recently, many researchers have speculated that other processes could have potentially large effects on it as well," said first author Surendra Adhikari of NASA's Jet Propulsion Laboratory in Pasadena, California. "We assembled models for a suite of processes that are thought to be important for driving the motion of the spin axis. We identified not one but three sets of processes that are crucial -- and melting of the global cryosphere (especially Greenland) over the course of the 20th century is one of them."

In general, the redistribution of mass on and within Earth -- like changes to land, ice sheets, oceans and mantle flow -- affects the planet's rotation. As temperatures increased throughout the 20th century, Greenland's ice mass decreased. In fact, a total of about 7,500 gigatons -- the weight of more than 20 million Empire State Buildings -- of Greenland's ice melted into the ocean during this time period. This makes Greenland one of the top contributors of mass being transferred to the oceans, causing sea level to rise and, consequently, a drift in Earth's spin axis.

While ice melt is occurring in other places (like Antarctica), Greenland's location makes it a more significant contributor to polar motion.

“There is a geometrical effect that if you have a mass that is off-axis from the North Pole and not near the equator -- which Greenland is -- or roughly 45 degrees from the South Pole (like Patagonian glaciers), it will have a bigger impact on shifting Earth's spin axis than a mass that is right near the pole," said co-author Erik Ivins, also of JPL.

Previous studies identified glacial rebound as the key contributor to long-term polar motion. And what is glacial rebound? During the last ice age, heavy glaciers depressed Earth's surface much like a mattress depresses when you sit on it. As that ice melts, or is removed, the land slowly rises back to its original position. In the new study, which relied heavily on a statistical analysis of such rebound, scientists figured out that glacial rebound is likely to be responsible for only about a third of the polar drift in the 20th century.

The authors argue that mantle convection makes up the final third. Mantle convection is responsible for the movement of tectonic plates on Earth's surface. It is basically the circulation of material in the mantle caused by heat from Earth's core. Ivins describes it as similar to a pot of soup placed on the stove. As the pot, or mantle, heats, the pieces of the soup begin to rise and fall, essentially forming a vertical circulation pattern -- just like the rocks moving through Earth's mantle.

With these three broad contributors identified, scientists can distinguish mass changes and polar motion caused by long-term Earth processes over which we have little control from those caused by climate change. They now know that if Greenland's ice loss accelerates, polar motion likely will, too.

The paper in Earth and Planetary Science Letters is titled "What drives 20th century polar motion?" Besides JPL, coauthor institutions include the German Research Centre for Geosciences, Potsdam; the University of Oslo, Norway; Technical University of Denmark, Kongens Lyngby; the Geological Survey of Denmark and Greenland, Copenhagen, Denmark; and the University of Bremen, Germany. An interactive simulation of how multiple processes contribute to the wobbles in Earth's spin axis is available at: