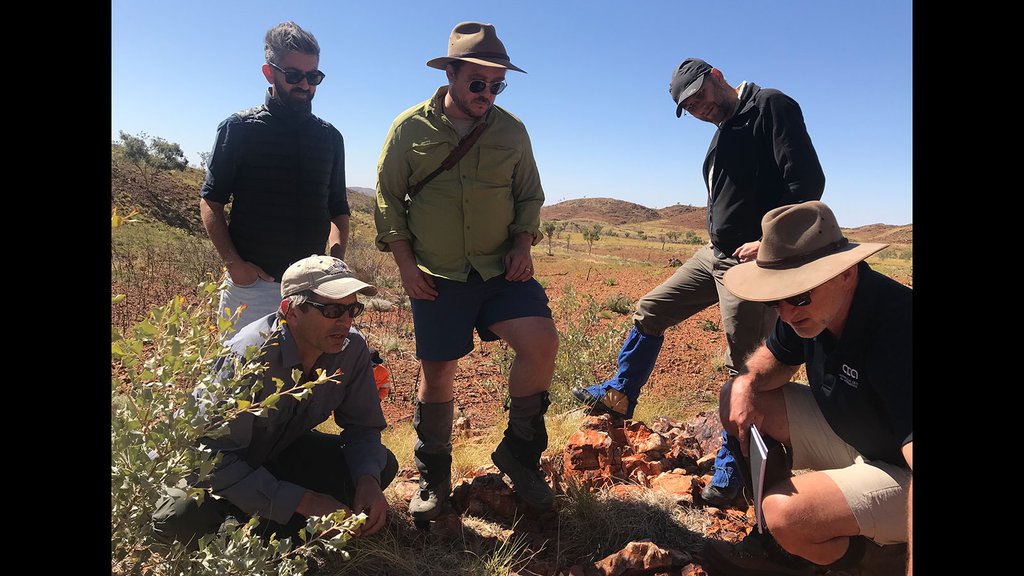 Scientists with NASA's Mars 2020 mission and the European-Russian ExoMars mission traveled to the Australian Outback to hone their research techniques before their missions launch to the Red Planet in the summer of 2020 to search for signs of ancient life on Mars.› Full image and caption
Credit: NASA/JPL-Caltech

Australia provides a great place for NASA's Mars 2020 and the ESA-Roscosmos ExoMars scientists to hone techniques in preparation for searching for signs ancient life on Mars.

This week, scientists from NASA's upcoming Mars 2020 mission joined their counterparts from the joint European-Russian ExoMars mission in an expedition to the Australian Outback, one of the most remote, arid regions on the planet. Both teams came to hone their research techniques before their missions launch to the Red Planet next summer in search of signs of past life on Mars.

The researchers know that any proof of past life on Mars will more than likely be almost microscopic in size. That's where the Pilbara region of North West Australia comes in.

"The Pilbara Outback is home to the oldest confirmed fossilized lifeforms on Earth, called stromatolites," said Ken Farley, project scientist for Mars 2020 at NASA's Jet Propulsion Laboratory in Pasadena, California. "If we can better understand how these fossils came to be here - and the nearby geological signposts that help point the way to them - we'll be that much more prepared when hunting for signs of life on Mars."

Scientists from NASA's Mars 2020 mission and the European Space Agency-Roscosmos ExoMars mission are in the Australian Outback to hone research techniques before their missions launch to the Red Planet in summer 2020. They are hoping to better understand how to search for signs of ancient life on Mars. The Pilbara region of North West Australia is home to "stromatolites," the oldest confirmed fossilized lifeforms on Earth.

The field trip was led by Martin Van Kranendonk, a professor of geology and astrobiology at the University of New South Wales in Sydney.

"Just as the Apollo astronauts visited areas of geologic interest on Earth before they journeyed to the Moon, the scientists of Mars 2020 and ExoMars are doing their due diligence before their missions make the 100-million-plus-mile [160-million-plus-kilometer] trip to the Red Planet," said Mitch Schulte, Mars 2020 program scientist at NASA Headquarters in Washington. "Martin helped them by providing a thorough and thought-provoking look into the geologic features of the Pilbara."

The first joint science trip for the Mars 2020 and ExoMars teams will conclude Aug. 24, when the scientists will pack up their field notes, fold up their tents and return to home. But the results from this astrobiology expedition will have positive, long-lasting ramifications in humanity's hunt for evidence that we are not alone in the universe.

JPL is building and will manage operations of the Mars 2020 rover for the NASA Science Mission Directorate at the agency's headquarters in Washington. NASA will use Mars 2020 and other missions, including to the Moon, to prepare for human exploration of the Red Planet. The agency plans to establish a sustained human presence on and around the Moon by 2028 through NASA's Artemis lunar exploration plans. The ExoMars program is a joint endeavor between the European Space Agency and the Russian Federal Space Agency (Roscosmos).

To submit your name to travel to Mars with NASA's 2020 mission and obtain a souvenir boarding pass to the Red Planet, go here by Sept. 30, 2019.