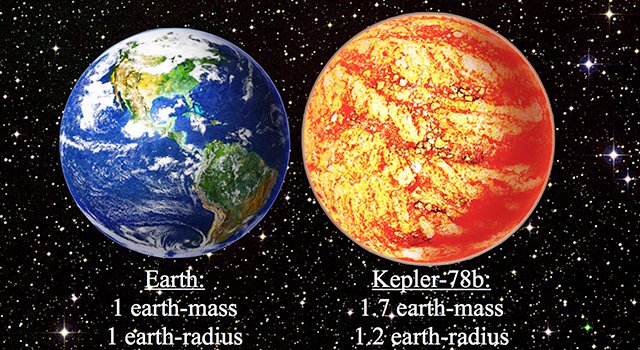 This illustration compares Earth with the newly confirmed scorched world of Kepler-78b. Kepler-78b is about 20 percent larger than Earth and is 70% more massive. Kepler-78b whizzes around its host star every 8.5 hours, making it a blazing inferno.
Credit: David A. Aguilar (CfA) 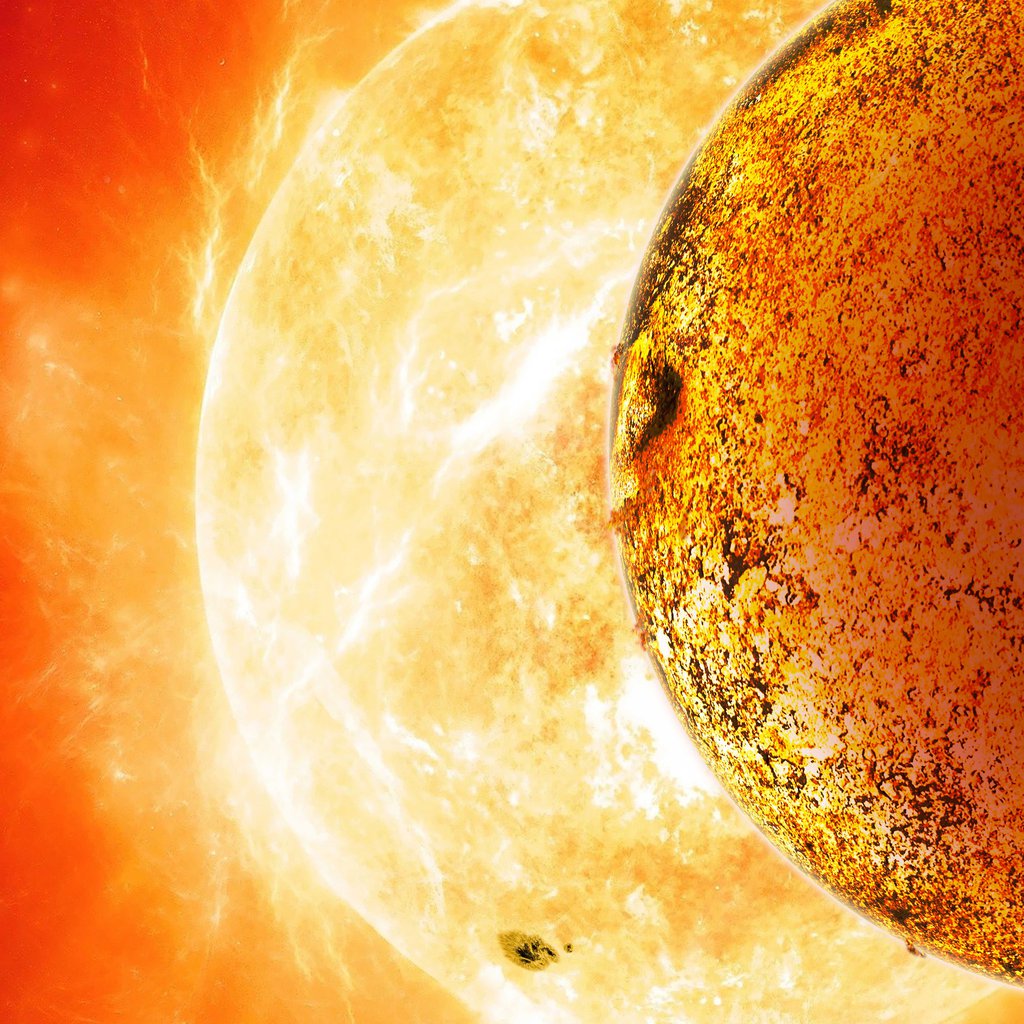 An artist's conception of Kepler-78b orbiting its parent star once every 8.5 hours.
Credit: David A. Aguilar (CfA)

Kepler-78b is rocky like Earth, but with an orbit of 8.5 hours, and it blisters under the heat of its star.

Astronomers have discovered the first Earth-size planet outside the solar system that has a rocky composition like that of Earth. Kepler-78b whizzes around its host star every 8.5 hours, making it a blazing inferno and not suitable for life as we know it. The results are published in two papers in the journal Nature.

"The message expresses the joy of knowing that Kepler's family of exoplanets is growing," Batalha reflects. "It also speaks of progress. The Doppler teams are attaining higher precision, measuring masses of smaller planets at each turn. This bodes well for the broader goal of one day finding evidence of life beyond Earth."

Kepler-78b was discovered using data from NASA's Kepler space telescope, which for four years simultaneously and continuously monitored more than 150,000 stars, looking for telltale dips in their brightness caused by crossing, or transiting, planets.

Two independent research teams then used ground-based telescopes to confirm and characterize Kepler-78b. To determine the planet's mass, the teams employed the radial velocity method to measure how much the gravitational tug of an orbiting planet causes its star to wobble. Kepler, on the other hand, determines the size or radius of a planet by the amount of starlight blocked when it passes in front of its host star.

A handful of planets the size or mass of Earth have been discovered. Kepler-78b is the first to have both a measured mass and size. With both quantities known, scientists can calculate a density and determine what the planet is made of.

Kepler-78b is 1.2 times the size of Earth and 1.7 times more massive, resulting in a density that is the same as Earth's. This suggests that Kepler-78b is also made primarily of rock and iron. Its star is slightly smaller and less massive than the sun and is located about 400 light-years from Earth in the constellation Cygnus.

One team, led by Andrew Howard from the University of Hawaii in Honolulu, made follow-up observations using the W. M. Keck Observatory on Mauna Kea in Hawaii. More information on their research can be found at: http://www.ifa.hawaii.edu/info/press-releases/Kepler-78b/ .

The other team led by Francesco Pepe from the University of Geneva, Switzerland, did their ground-based work at the Roque de los Muchachos Observatory on La Palma in the Canary Islands. More information on their research can be found at http://www.cfa.harvard.edu/news/2013-25 .

This result will be one of many discussed next week at the second Kepler science conference Nov. 4 to 8 at Ames. More than 400 astrophysicists from Australia, China, Europe, Latin America and the U.S. will convene to present their latest results using publicly accessible data from Kepler. More information about the conference is at: http://nexsci.caltech.edu/conferences/KeplerII/index.shtml .