Scientists Discover Pluto Kin Is a Member of Saturn Family 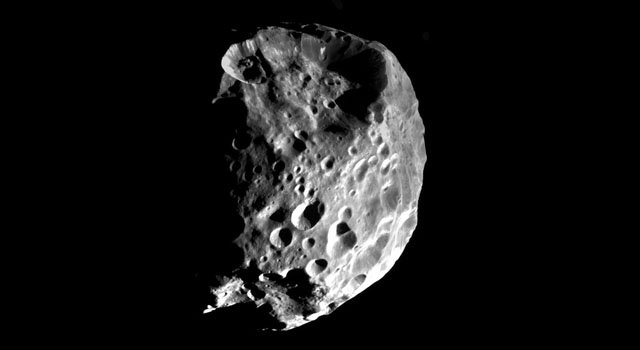 Saturn's battered little moon Phoebe is an interloper to the Saturn system from the deep outer solar system, scientists have concluded.

Saturn's battered little moon Phoebe is an interloper to the Saturn system from the deep outer solar system, scientists have concluded. The new findings appear in the May 5 issue of the journal Nature.

"Phoebe was left behind from the solar nebula, the cloud of interstellar gas and dust from which the planets formed," said Dr. Torrence Johnson, Cassini imaging team member at NASA’s Jet Propulsion Laboratory, Pasadena, Calif. "It did not form at Saturn. It was captured by Saturn's gravitational field and has been waiting eons for Cassini to come along."

Cassini flew by Phoebe on its way to Saturn on June 11, 2004. Little was known about Phoebe at that time. During the encounter, scientists got the first detailed look at Phoebe, which allowed them to determine its makeup and mass. With the new information they have concluded that it has an outer solar system origin, akin to Pluto and other members of the Kuiper Belt.

"Cassini is showing us that Phoebe is quite different from Saturn's other icy satellites, not just in its orbit but in the relative proportions of rock and ice. It resembles Pluto in this regard much more than it does the other Saturnian satellites," said Dr. Jonathan Lunine, Cassini interdisciplinary scientist from the University of Arizona, Tucson.

The Cassini-Huygens mission is a cooperative project of NASA, the European Space Agency and the Italian Space Agency. JPL, a division of the California Institute of Technology in Pasadena, manages the Cassini mission for NASA's Science Mission Directorate, Washington, D.C. For Phoebe images and more information about the Cassini-Huygens mission, visit http://saturn.jpl.nasa.gov and http://www.nasa.gov/cassini.