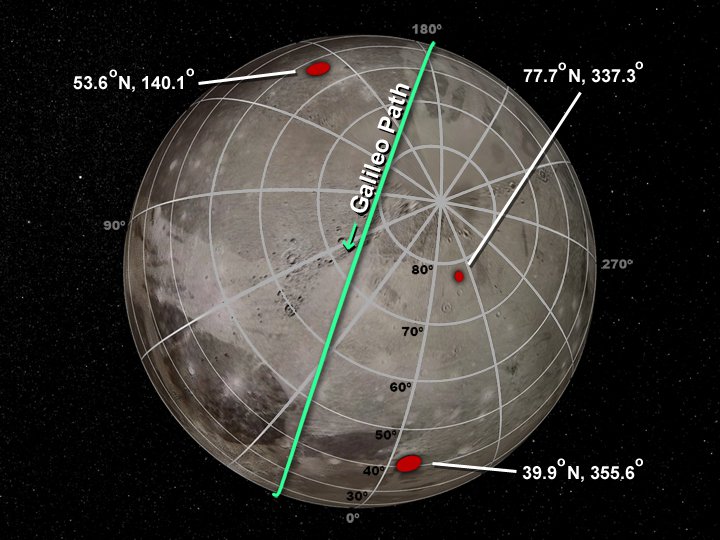 This mosaic of Jupiter’s moon Ganymede consists of more than 100 images acquired with NASA’s Voyager and Galileo spacecrafts.

Scientists have discovered irregular lumps beneath the icy surface of Jupiter's largest moon, Ganymede. These irregular masses may be rock formations, supported by Ganymede's icy shell for billions of years. This discovery comes nearly a year after the orchestrated demise of NASA's Galileo spacecraft into Jupiter's atmosphere and more than seven years after the data were collected.

Researchers at NASA's Jet Propulsion Laboratory, Pasadena, Calif., and the University of California, Los Angeles, report their findings in a paper that will appear in the Aug. 13 issue of the journal Science.

The findings have caused scientists to rethink what the interior of Ganymede might contain. The reported bulges reside in the interior, and there are no visible surface features associated with them. This tells scientists that the ice is probably strong enough, at least near the surface, to support these possible rock masses from sinking to the bottom of the ice for billions of years. But this anomaly could also be caused by piles of rock at the bottom of the ice.

"The anomalies could be large concentrations of rock at or underneath the ice surface. They could also be in a layer of mixed ice and rock below the surface with variations in the amount of rock," said Dr. John Anderson, a scientist and the paper's lead author at JPL. "If there is a liquid water ocean inside Ganymede's outer ice layer there might be variations in its depth with piles of rock at the ocean bottom. There could be topographic variations in a hidden rocky surface underlying a deep outer icy shell. There are many possibilities, and we need to do more studies."

Dr. Gerald Schubert, co-author at UCLA, said "Although we don't yet have anything definitive about the depth at this point, we did not expect Ganymede's ice shell to be strong enough to support these lumpy mass concentrations. Thus, we expect that the irregularities would be close to the surface where the ice is coldest and strongest, or at the bottom of the thick ice shell resting on the underlying rock. It would really be a surprise if these masses were deep and in the middle of the ice shell."

Ganymede has three main layers. A sphere of metallic iron at the center (the core), a spherical shell of rock (mantle) surrounding the core, and a spherical shell of mostly ice surrounding the rock shell and the core. The ice shell on the outside is very thick, maybe 800 kilometers (497 miles) thick. The surface is the very top of the ice shell. Though it is mostly ice, the ice shell might contain some rock mixed in. Scientists believe there must be a fair amount of rock in the ice near the surface. Variations in this amount of rock may be the source of these possible rock formations.

Scientists stumbled on the results by studying Doppler measurements of Ganymede's gravity field during Galileo's second flyby of the moon in 1996. Scientists were measuring the effect of the moon's gravity on the spacecraft as it flew by. They found unexpected variations.

"Believe it or not, it took us this long to straighten out the anomaly question, mostly because we were analyzing all 31 close flybys for all four of Jupiter's large moons," said Anderson. "In the end, we concluded that there is only one flyby, the second flyby of Ganymede, where mass anomalies are evident."

"The fact that these mass anomalies can be detected with just flybys is significant for future missions," said Dr. Torrence Johnson, former Galileo project scientist. "With this type of information you could make detailed gravity and altitude maps that allow us to actually map structures within the ice crust or on the rocky surface. Knowing more about the interior of Ganymede raises the level of importance of looking for gravity anomalies around Jupiter's moons and gives us something to look for. This might be something NASA's proposed Jupiter Icy Moons Orbiter Mission could probe into deeper."

The paper was co-authored by Dr. Robert A. Jacobson and Eunice L. Lau of JPL, with Dr. William B. Moore and Jennifer L. Palguta of UCLA. JPL is a division of the California Institute of Technology in Pasadena. JPL designed and built the Galileo orbiter, and operated the mission. For images and information about the Galileo mission, visit http://galileo.jpl.nasa.gov/ .