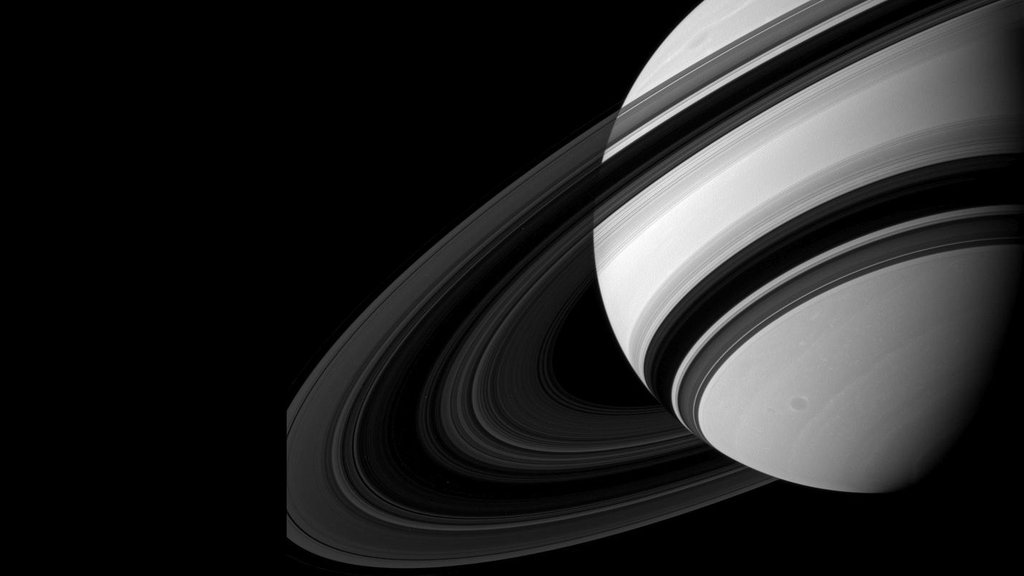 Saturn's B ring is the most opaque of the main rings, appearing almost black in this Cassini image taken from the unlit side of the ringplane.› Full image and caption
Credit: NASA/JPL-Caltech/Space Science Institute 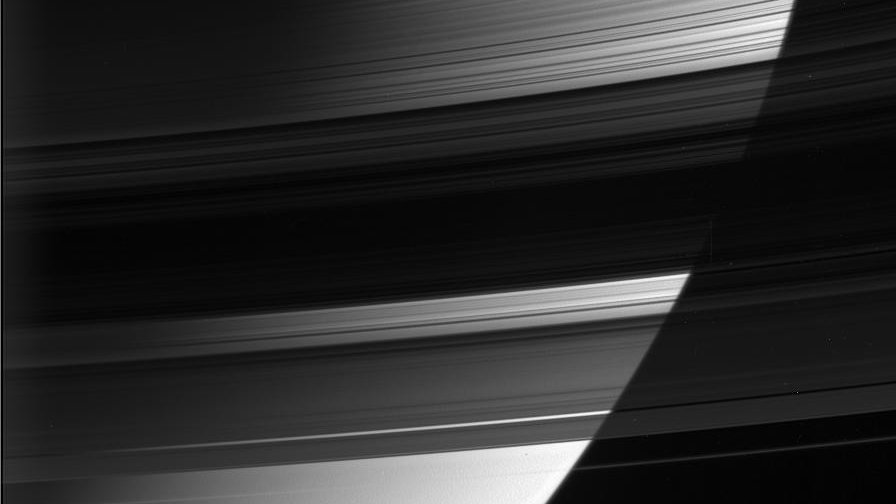 Some parts of Saturn's B ring are up to 10 times more opaque than the neighboring A ring, but the B ring may weigh in at only two to three times the A ring's mass.› Full image and caption
Credit: NASA/JPL-Caltech/Space Science Institute 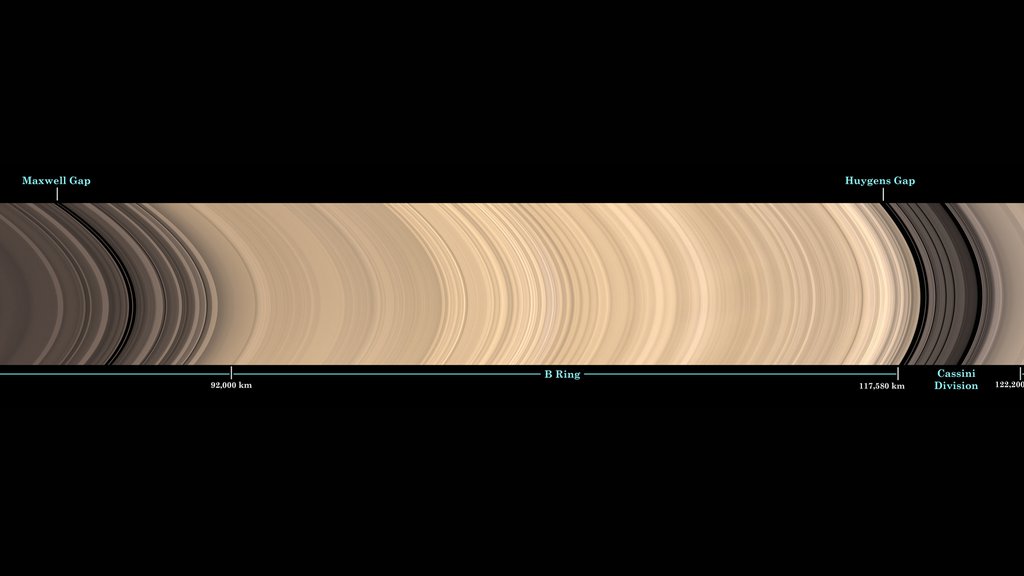 This image is cropped from a panoramic view of Saturn's main ring system, and includes the names of major ring features.› Full image and caption
Credit: NASA/JPL-Caltech/Space Science Institute 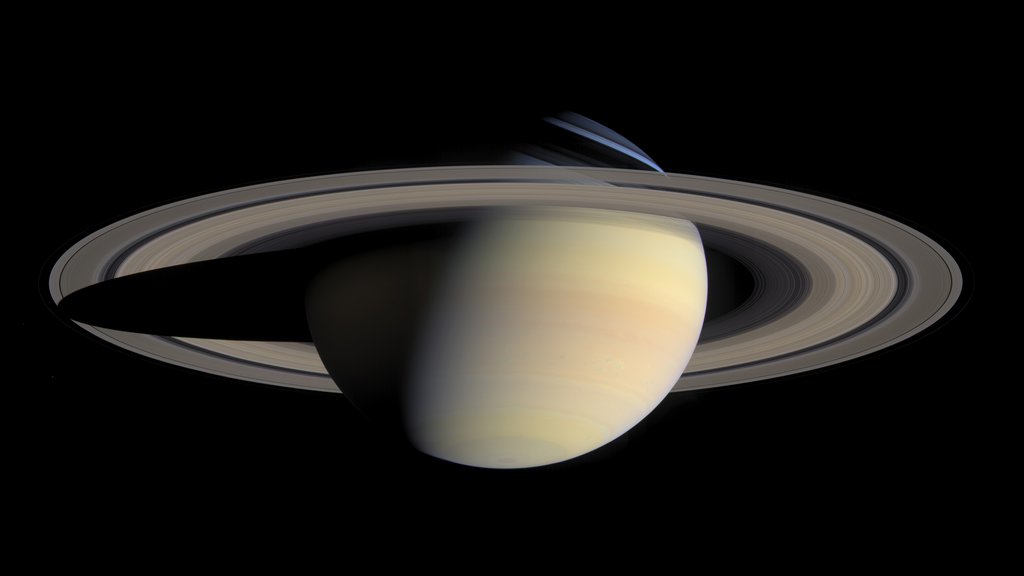 The B ring is the brightest of Saturn's rings when viewed in reflected sunlight.› Full image and caption
Credit: NASA/JPL-Caltech/Space Science Institute

A recent study from NASA's Cassini mission proves that, in the mysterious and beautiful rings of Saturn, appearances can be deceiving.

› Researchers "weighed" the central parts of Saturn's most massive ring for the first time.

› The results confirm that more opaque areas in the rings do not necessarily contain more material.

› Research on the mass of Saturn's rings has important implications for their age.

It seems intuitive that an opaque material should contain more stuff than a more translucent substance. For example, muddier water has more suspended particles of dirt in it than clearer water. Likewise, you might think that, in the rings of Saturn, more opaque areas contain a greater concentration of material than places where the rings seem more transparent.

But this intuition does not always apply, according to a recent study of the rings using data from NASA's Cassini mission. In their analysis, scientists found surprisingly little correlation between how dense a ring might appear to be -- in terms of its opacity and reflectiveness -- and the amount of material it contains.

The new results concern Saturn's B ring, the brightest and most opaque of Saturn's rings, and are consistent with previous studies that found similar results for Saturn's other main rings.

The scientists found that, while the opacity of the B ring varied by a large amount across its width, the mass - or amount of material - did not vary much from place to place. They "weighed" the nearly opaque center of the B ring for the first time -- technically, they determined its mass density in several places -- by analyzing spiral density waves. These are fine-scale ring features created by gravity tugging on ring particles from Saturn's moons, and the planet's own gravity. The structure of each wave depends directly on the amount of mass in the part of the rings where the wave is located.

"At present it's far from clear how regions with the same amount of material can have such different opacities. It could be something associated with the size or density of individual particles, or it could have something to do with the structure of the rings," said Matthew Hedman, the study's lead author and a Cassini participating scientist at the University of Idaho, Moscow. Cassini co-investigator Phil Nicholson of Cornell University, Ithaca, New York, co-authored the work with Hedman.

"Appearances can be deceiving," said Nicholson. "A good analogy is how a foggy meadow is much more opaque than a swimming pool, even though the pool is denser and contains a lot more water."

Research on the mass of Saturn's rings has important implications for their age. A less massive ring would evolve faster than a ring containing more material, becoming darkened by dust from meteorites and other cosmic sources more quickly. Thus, the less massive the B ring is, the younger it might be -- perhaps a few hundred million years instead of a few billion.

"By 'weighing' the core of the B ring for the first time, this study makes a meaningful step in our quest to piece together the age and origin of Saturn's rings," said Linda Spilker, Cassini project scientist at NASA's Jet Propulsion Laboratory, Pasadena, California. "The rings are so magnificent and awe-inspiring, it's impossible for us to resist the mystery of how they came to be."

While all the giant planets in our solar system (Jupiter, Saturn, Uranus and Neptune) have ring systems of their own, Saturn's are clearly different. Explaining why Saturn's rings are so bright and vast is an important challenge in understanding their formation and history. For scientists, the density of material packed into each section of the rings is a critical factor in ascribing their formation to a physical process.

An earlier study by members of Cassini's composite infrared spectrometer team had suggested the possibility that there might be less material in the B ring than researchers had thought. The new analysis is the first to directly measure the density of mass in the ring and demonstrate that this is the case.

Hedman and Nicholson used a new technique to analyze data from a series of observations by Cassini's visible and infrared mapping spectrometer as it peered through the rings toward a bright star. By combining multiple observations, they were able to identify spiral density waves in the rings that aren't obvious in individual measurements.

The analysis also found that the overall mass of the B ring is unexpectedly low. It was surprising, said Hedman, because some parts of the B ring are up to 10 times more opaque than the neighboring A ring, but the B ring may weigh in at only two to three times the A ring's mass.

Despite the low mass found by Hedman and Nicholson, the B ring is still thought to contain the bulk of material in Saturn's ring system. And although this study leaves some uncertainty about the ring's mass, a more precise measurement of the total mass of Saturn's rings is on the way. Previously, Cassini had measured Saturn's gravity field, telling scientists the total mass of Saturn and its rings. In 2017, Cassini will determine the mass of Saturn alone by flying just inside the rings during the final phase of its mission. The difference between the two measurements is expected to finally reveal the rings' true mass.

The study was published online by the journal Icarus.