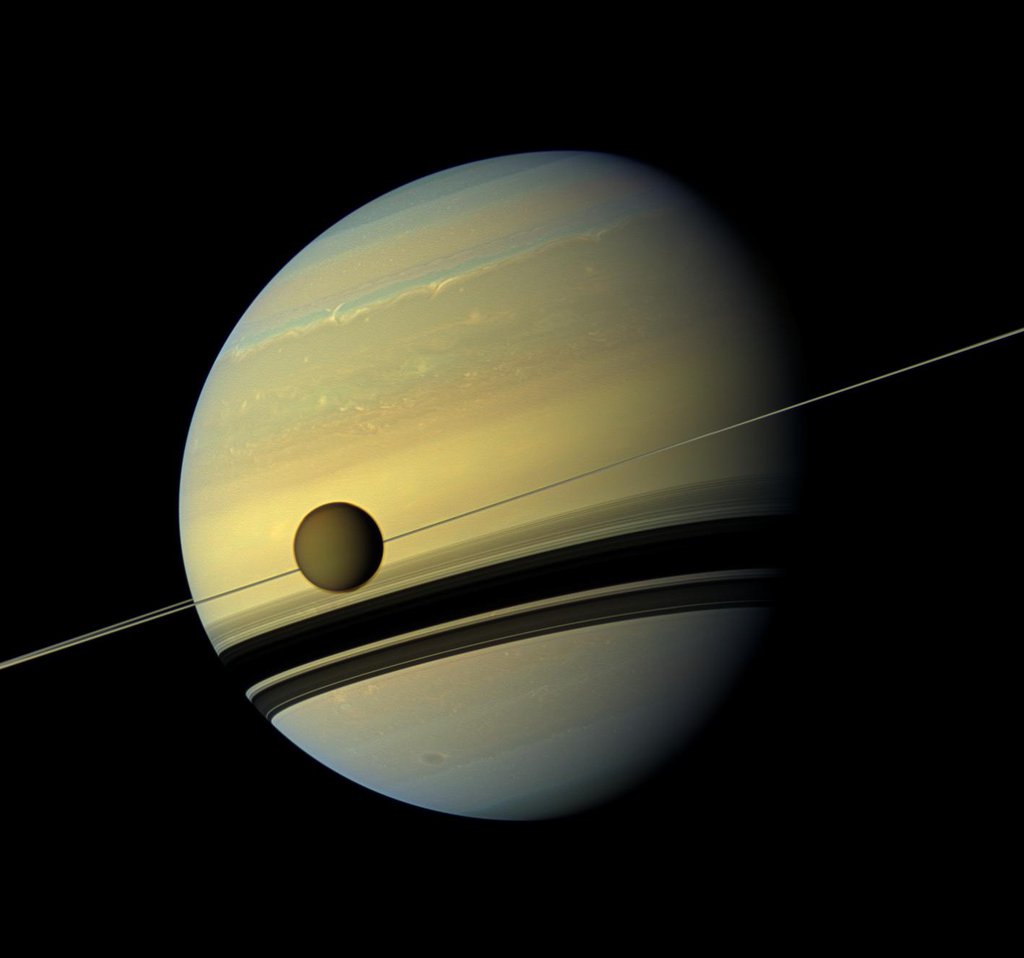 A giant of a moon appears before a giant of a planet undergoing seasonal changes in this natural color view of Titan and Saturn from NASA's Cassini spacecraft.
Credit: NASA/JPL-Caltech/Space Science Institute
Full Image Details

The new research by scientists at NASA and the Italian Space Agency has implications for the entire Saturn system as well as other planets and moons.

Just as our own Moon floats away from Earth a tiny bit more each year, other moons are doing the same with their host planets. As a moon orbits, its gravity pulls on the planet, causing a temporary bulge in the planet as it passes.

Over time, the energy created by the bulging and subsiding transfers from the planet to the moon, nudging it farther and farther out. Our Moon drifts 1.5 inches (3.8 centimeters) from Earth each year.

Scientists thought they knew the rate at which the giant moon Titan is moving away from Saturn, but they recently made a surprising discovery: Using data from NASA's Cassini spacecraft, they found Titan drifting a hundred times faster than previously understood - about 4 inches (11 centimeters) per year.

The findings may help address an age-old question. While scientists know that Saturn formed 4.6 billion years ago in the early days of the solar system, there's more uncertainty about when the planet's rings and its system of more than 80 moons formed. Titan is currently 759,000 miles (1.2 million kilometers) from Saturn. The revised rate of its drift suggests that the moon started out much closer to Saturn, which would mean the whole system expanded more quickly than previously believed.

"This result brings an important new piece of the puzzle for the highly debated question of the age of the Saturn system and how its moons formed," said Valery Lainey, lead author of the work published June 8 in Nature Astronomy. He conducted the research as a scientist at NASA's Jet Propulsion Laboratory in Southern California before joining the Paris Observatory at PSL University.

To learn more about Saturn, zoom in and give the planet a spin. Use the search function at bottom to learn more about its moons - or just about anything else in the solar system. View the full interactive experience at Eyes on the Solar System. Credit: NASA/JPL-Caltech

The findings on Titan's rate of drift also provide important confirmation of a new theory that explains and predicts how planets affect their moons' orbits.

For the last 50 years, scientists have applied the same formulas to estimate how fast a moon drifts from its planet, a rate that can also be used to determine a moon's age. Those formulas and the classical theories on which they're based were applied to moons large and small all over the solar system. The theories assumed that in systems such as Saturn's, with dozens of moons, the outer moons like Titan migrated outward more slowly than moons closer in because they are farther from their host planet's gravity.

Four years ago, theoretical astrophysicist Jim Fuller, now of Caltech, published research that upended those theories. Fuller's theory predicted that outer moons can migrate outward at a similar rate to inner moons because they become locked in a different kind of orbit pattern that links to the particular wobble of a planet and slings them outward.

"The new measurements imply that these kind of planet-moon interactions can be more prominent than prior expectations and that they can apply to many systems, such as other planetary moon systems, exoplanets - those outside our solar system - and even binary star systems, where stars orbit each other," said Fuller, a coauthor of the new paper.

To reach their results, the authors mapped stars in the background of Cassini images and tracked Titan's position. To confirm their findings, they compared them with an independent dataset: radio science data collected by Cassini. During ten close flybys between 2006 and 2016, the spacecraft sent radio waves to Earth. Scientists studied how the signal's frequency was changed by their interactions with their surroundings to estimate how Titan's orbit evolved.

"By using two completely different datasets, we obtained results that are in full agreement, and also in agreement with Jim Fuller's theory, which predicted a much faster migration of Titan," said coauthor Paolo Tortora, of Italy's University of Bologna. Tortora is a member of the Cassini Radio Science team and worked on the research with the support of the Italian Space Agency.

Managed by JPL, Cassini was an orbiter that observed Saturn for more than 13 years before exhausting its fuel supply. The mission plunged it into the planet's atmosphere in September 2017, in part to protect its moon Enceladus, which Cassini discovered might hold conditions suitable for life.