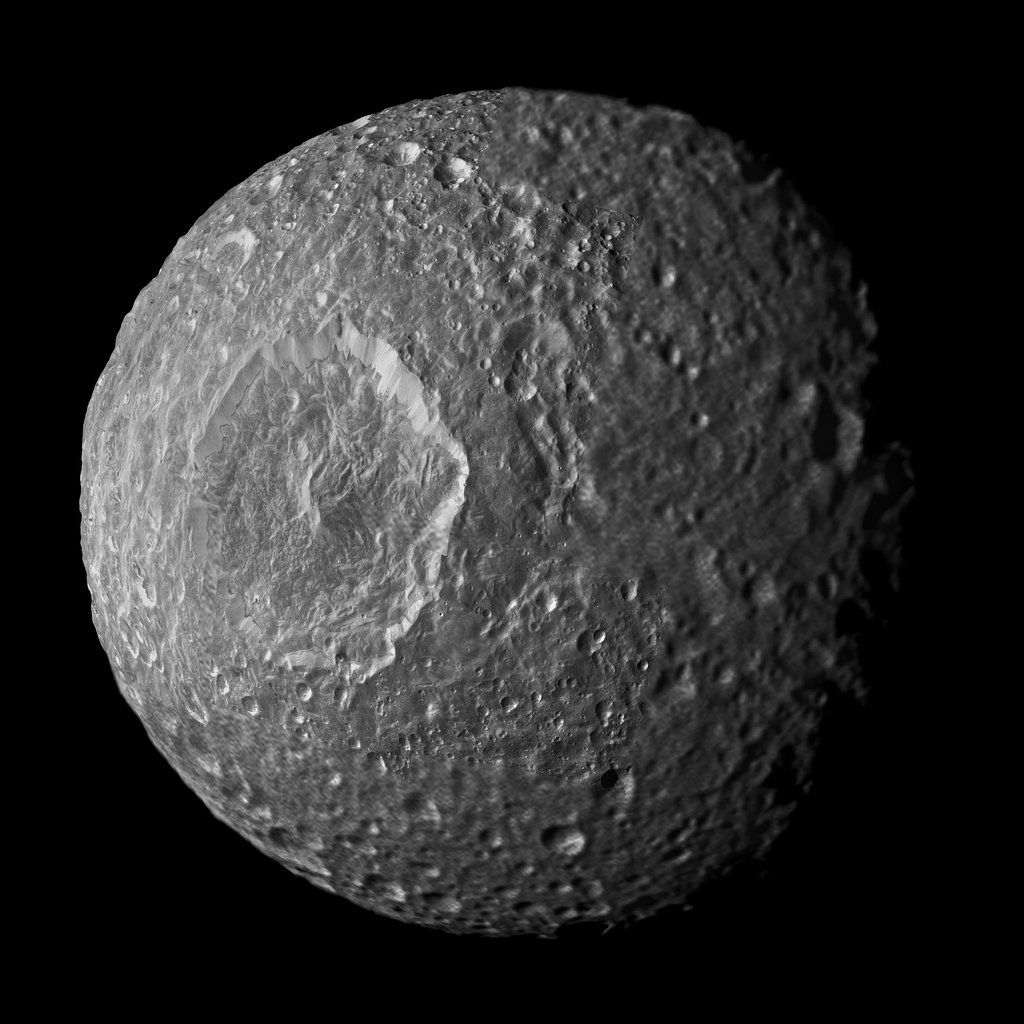 This mosaic of Saturn's moon Mimas was created from images taken by NASA's Cassini spacecraft during its closest flyby of the moon on Feb. 13, 2010.› Full image and caption
Credit: NASA/JPL-Caltech/Space Science Institute

A new study suggests the cratered surface of Saturn's icy moon Mimas indicates the moon's frozen core is shaped something like a football, or the moon has a liquid water ocean.

A new study focused on the interior of Saturn's icy moon Mimas suggests its cratered surface hides one of two intriguing possibilities: Either the moon's frozen core is shaped something like a football, or the satellite contains a liquid water ocean.

Researchers used numerous images of Mimas taken by NASA's Cassini mission to determine how much the moon wobbles as it orbits Saturn. They then evaluated several possible models for how its interior might be arranged, finding two possibilities that fit their data.The study is published in the Oct. 17 issue of the journal Science.

"The data suggest that something is not right, so to speak, inside Mimas," said Radwan Tajeddine, a Cassini research associate at Cornell University, Ithaca, New York, and lead author on the paper. "The amount of wobble we measured is double what was predicted."

Either possiblity for the interior of Mimas would be interesting, according to Tajeddine, as the moon's heavily cratered outward appearance does not suggest anything unusual lies beneath its surface. Because Mimas formed more than four billion years ago, scientists would expect its core to have relaxed into a more or less spherical shape by now. So if Mimas' core is oblong in shape, it likely represents a record of the moon's formation, frozen in time.

If Mimas possesses an ocean, it would join an exclusive club of "ocean worlds" that includes several moons of Jupiter and two other Saturn moons, Enceladus and Titan. A global ocean would be surprising, said Tajeddine, as the surface of Mimas does not display signs of geologic activity.

Like a lot of moons in the solar system, including our own, Mimas always shows essentially the same face to its parent planet. This is called a spin-orbit resonance, meaning the moon's rotation, or spin, is in sync with its orbit around Saturn. Like Earth's moon, Mimas takes the same amount of time to spin completely around on its axis as it takes to orbit its planet.

The orbit of Mimas is very slightly stretched out, forming an ellipse rather than a perfect circle. This slight deviation causes the point on Mimas' surface that faces Saturn to vary a bit over the course of an orbit -- an observer on Saturn would see Mimas wobble slightly during its orbit, causing small amounts of terrain over the limb to become visible. This effect is called libration, and Earth's moon does it as well.

"Observing libration can provide useful insights about what is going on inside a body," said Tajeddine. "In this case, it is telling us that this cratered little moon may be more complex than we thought."

Models developed by Tajeddine and co-authors from France and Belgium indicate that, if Mimas is hiding a liquid water ocean, it lies 15 to 20 miles (24 to 31 kilometers) beneath the moon's impact-battered surface. At 246 miles (396 kilometers) wide, Mimas is too small to have retained internal heat from its formation, so some other source of energy would be required to maintain an underground ocean. The researchers note that there is evidence that Mimas' current, elongated orbit could have been even more stretched out in the past, which might have created enough tidal heating to produce an ocean.

Although an ocean within Mimas would be a surprise, the authors found that the interior model they considered for an oblong core ought to give the moon a slightly different shape than what is observed. They suggest that other models could be developed to explain the moon's observed libration, and that further measurements by Cassini could help determine which model is most likely to be correct.

The Cassini-Huygens mission is a cooperative project of NASA, the European Space Agency and the Italian Space Agency. JPL, a division of the California Institute of Technology, Pasadena, manages the mission for NASA's Science Mission Directorate in Washington. The imaging team is based at the Space Science Institute in Boulder, Colorado.