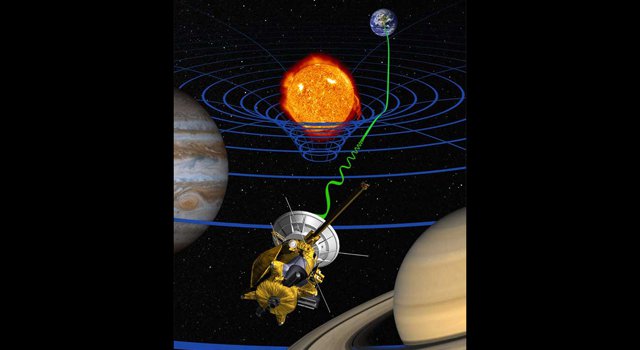 An experiment by Italian scientists using data from NASA's Cassini spacecraft, currently en route to Saturn, confirms Einstein's theory of general relativity with a precision that is 50 times greater than previous measurements.

An experiment by Italian scientists using data from NASA's Cassini spacecraft, currently en route to Saturn, confirms Einstein's theory of general relativity with a precision that is 50 times greater than previous measurements.

The findings appear in the Sept. 25 issue of the journal Nature. They are part of a scientific collaboration between NASA and the Italian Space Agency. The experiment took place in the summer of 2002, when the spacecraft and Earth were on opposite sides of the Sun separated by a distance of more than 1 billion kilometers (approximately 621 million miles).

Researchers observed the frequency shift of radio waves to and from the spacecraft as the waves passed near the Sun. They precisely measured the change in the round-trip light time of the radio signal as it traveled close to the Sun. The round-trip light time is the time it takes the signal transmitted from the Deep Space Network station in Goldstone Calif., to the spacecraft on the other side of the Sun and back traveling at the speed of light.

"The scientific significance of these results is the important confirmation of the theory of general relativity and the agreement with Einstein's formulations to an unprecedented experimental accuracy," said Sami Asmar, manager of the Radio Science Group, which acquired the data for this experiment at NASA's Jet Propulsion Laboratory in Pasadena, Calif. "The technological significance of the experiment is the ability to overcome the harsh solar environment on radio links."

The researchers measured how much the Sun's gravity bent an electromagnetic beam, in this case the radio signal transmitted by the spacecraft and received by the ground stations.

According to the theory of general relativity, a massive object like the Sun causes space-time to curve, and a beam of radio waves (or light) that passes by the Sun has to travel further because of the curvature. The extra distance that the radio waves travel from Cassini past the Sun to the Earth delays their arrival; the amount of the delay provides a sensitive test of the predictions of Einstein's theory. Although deviations from general relativity are expected in some cosmological models, none were found in this experiment.

Past tests of general relativity confirmed Einstein's prediction to an accuracy of one part per thousand. This accuracy was achieved back in 1979 using the Viking landers on Mars. The Cassini experiment confirmed it to an accuracy of 20 parts per million. The key to this improvement has been the adoption of novel technologies in space telecommunications.

The experiment could not have been conducted to this level of accuracy in the past because of noise on the radio link introduced by the solar corona. With the Cassini experiment, this hindrance was overcome by fitting the spacecraft communication system with multiple links at different frequencies. This new capability on the Cassini spacecraft and on the 34-meter (112 foot) diameter antenna at Goldstone, allowed scientists to remove the effects of the interplanetary and solar plasma from the radio data. In addition, the noise from Earth's atmosphere was strongly reduced by special equipment installed at the Goldstone complex. These technological breakthroughs developed for the Cassini mission have led to unprecedented accuracies in the velocity measurements with benefits for future scientific experiments as well as deep space navigation.

The experiments are part of a series of radio science experiments planned for the cruise phase of the mission, including the search for low frequency gravitational waves.

Cassini will begin orbiting Saturn on July 1, 2004, and release its piggybacked Huygens probe about six months later for descent through the thick atmosphere of the moon Titan.