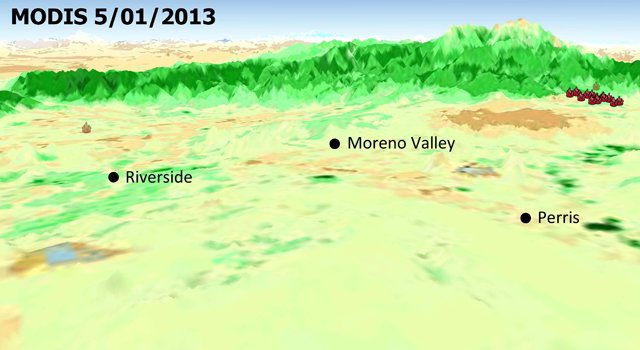 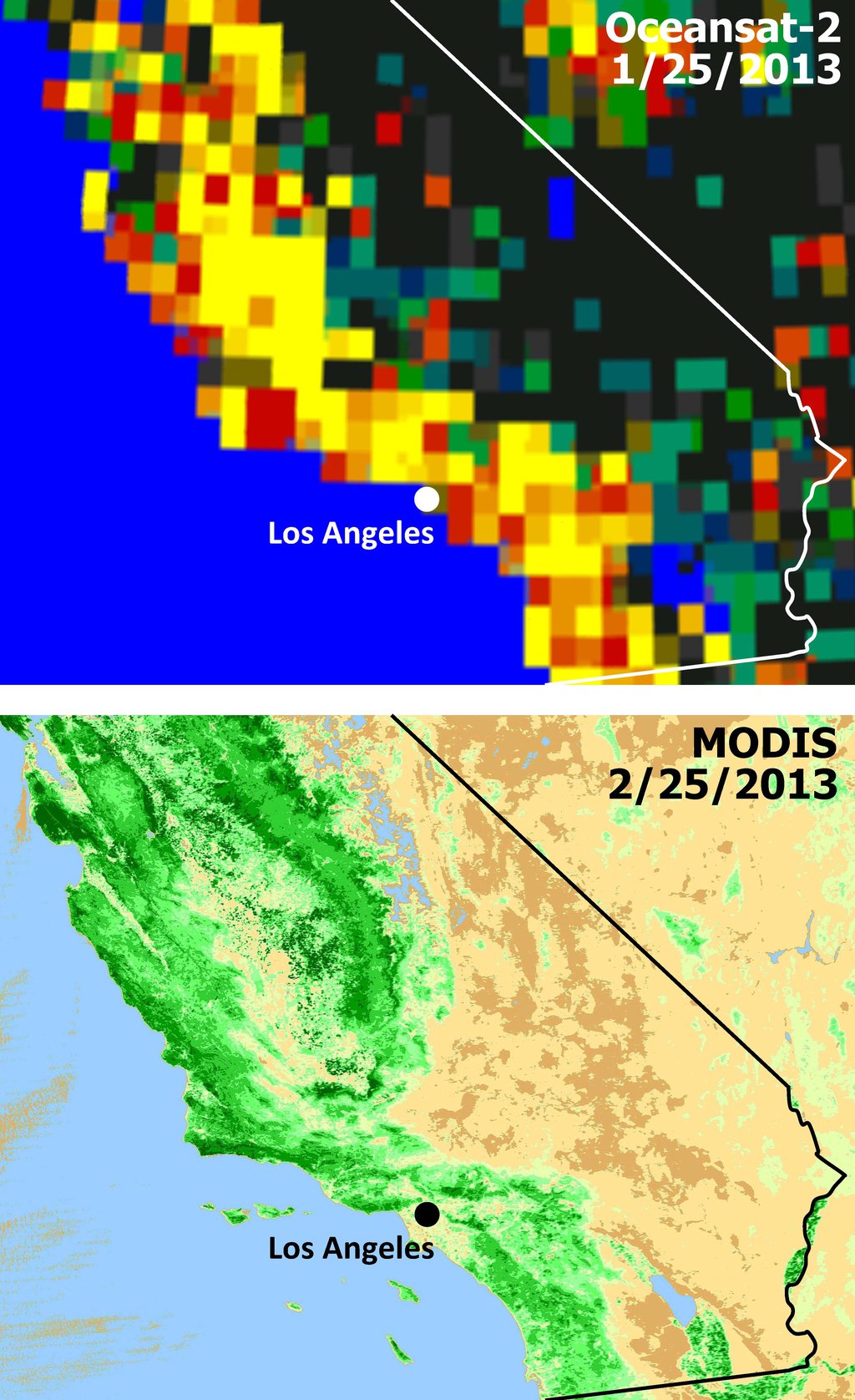 Extensive and persistent rains between Jan. 24 and Jan. 27, 2013, significantly increased soil moisture and enhanced vegetation growth in Southern California. The upper panel represents changes in soil moisture measured by the Indian Oceansat-2 satellite on Jan. 25, 2013. Wet areas - those with more than a 10-percent increase in soil moisture -- are shown in yellow. The lower panel depicts vegetation conditions as represented by the Normalized Difference Vegetation Index measured by NASA's Moderate Resolution Imaging Spectroradiometer (MODIS) sensor on NASA's Aqua spacecraft on Feb. 25, 2013, when vegetation had been growing rapidly since the period of rain in January. Darker green areas represent more vegetation.
Credit: NASA/JPL-Caltech/ISRO

The scientists tracked the relationship between rainfall and the growth and drying-out of vegetation in recent months, during an abnormally dry year. They found the timing of rains triggered regional vegetation growth in January and early February, which then dried out faster than normal during a period of low rainfall, strong winds and high temperatures in March and April. The combination likely elevates wildfire risks by increasing available fuel.

The two institutions are combining satellite datasets to monitor moisture changes in vegetation and soil across Southern California's vast wilderness areas in order to identify early warning signs of potential wildfires. The scientists are using measurements of soil moisture change from the Indian Oceansat-2 satellite scatterometer (OSCAT) and of vegetation stress from the Moderate Resolution Imaging Spectroradiometer (MODIS) sensor on NASA's Aqua satellite.

"The increased soil moisture from the rains, as observed by OSCAT, occurred at an opportune time at the start of the vegetation growth season," said JPL scientist Son Nghiem, principal investigator of the project. "This timing enhanced vegetation growth early this year, particularly in Ventura County, supplying significant new fire fuel, despite one of the driest overall rainfall seasons on record. Had the rains fallen earlier, when the vegetation was in a dormant state, the effects would have been minimal." OSCAT measurements provide insight into how much rainwater sinks into the soil to enhance vegetation growth.

The resulting stress on vegetation and abnormal dry-out, which occurred even before the start of the dry season, has been seen in measurements by fire agencies at various sampling locations and in satellite data from MODIS across the Southland, notes Professor Menas C. Kafatos, who leads the Chapman University team.

Nghiem said the unusual conditions this season underscore the challenge local fire officials face in tracking how soil moisture changes in response to precipitation and affects the condition of vegetation. The conditions also highlight the potential for using satellite observations to enhance fire information and management systems.

The satellite data will support decision-making by wildland fire authorities, including fire departments in Los Angeles, Ventura and Orange Counties, and the National Oceanic and Atmospheric Administration's National Weather Service Forecast Office in Oxnard, Calif. While that office is not responsible for fire management, it supports local fire agencies by issuing fire weather forecasts, watches and warnings to four California counties, which are home to 11 million people. The collaboration between scientists and fire agencies will allow them to develop satellite data products that will be combined with other information to improve the assessment of wildfire danger.

Orange County fire planning specialist George Ewan recently hosted the scientists during a field excursion in Black Star Canyon, where he demonstrated how he carefully collects snippets of brush growth and returns them to his laboratory at the Orange County Fire Authority headquarters in Irvine, Calif., to measure the moisture content of the vegetation.

But collection of plant samples is simply not feasible for all areas of concern across California and the rest of the United States, Nghiem said. "Mountainous wildlands are difficult to access, and collecting data manually in them is laborious," he said. "The potential payoff from this satellite research is significant, both for California's extensive and complex terrain and for the many regions around the world threatened by wildfires each year."

Kafatos noted that "the combination of satellite observations with live fuel moisture estimates and calculations from our teamwork is opening new vistas in this important scientific application serving society."

"The initial results of this effort are very promising examples of putting satellite observations into practical use for fire management and public benefit," said Lawrence Friedl, director of the NASA Applied Sciences program in the Earth Science Division at NASA Headquarters in Washington.