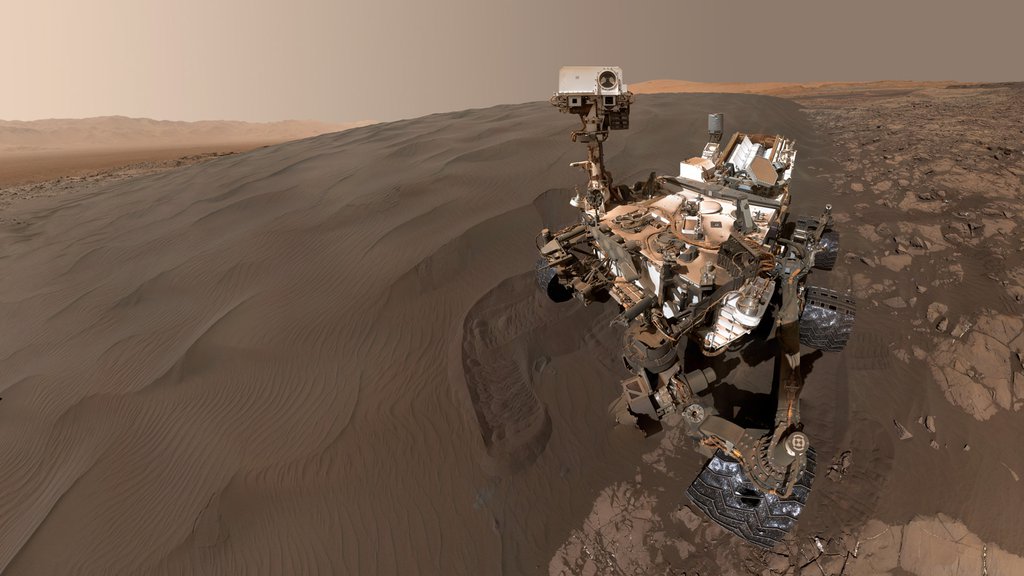 This Jan. 19, 2016, self-portrait of NASA's Curiosity Mars rover shows the vehicle at "Namib Dune," where the rover's activities included scuffing into the dune with a wheel and scooping samples of sand for laboratory analysis.› Full image and caption
Credit: NASA/JPL-Caltech/MSSS 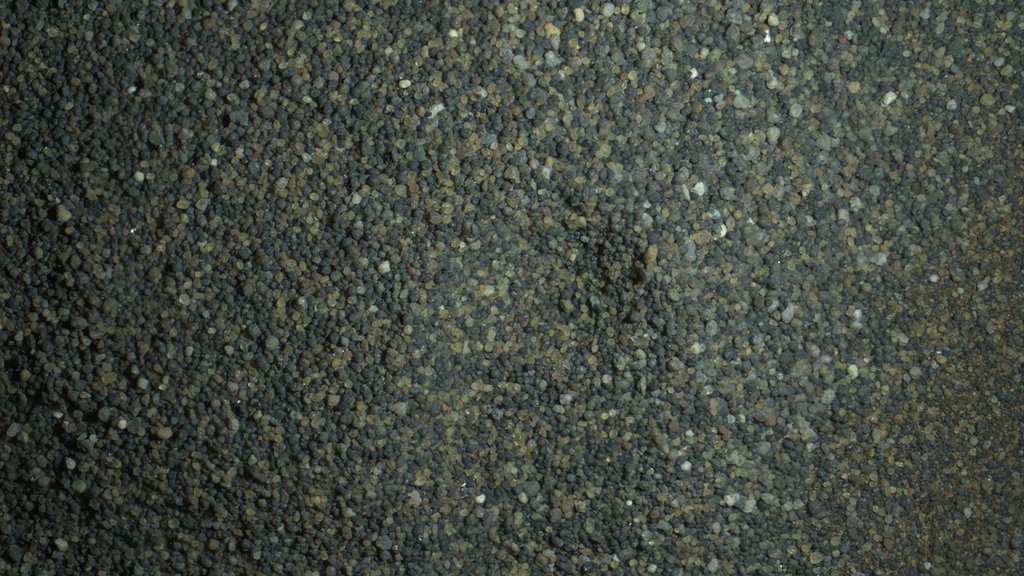 The Mars Hand Lens Imager (MAHLI) camera on the robotic arm of NASA's Curiosity Mars rover used electric lights at night on Jan. 22, 2016, to illuminate this postage-stamp-size view of Martian sand grains dumped on the ground after sorting with a sieve.› Full image and caption
Credit: NASA/JPL-Caltech/MSSS

The new selfie combines 57 images taken by the Mars Hand Lens Imager (MAHLI) camera at the end of Curiosity's arm on Jan. 19. It is online at

The rover has been investigating a group of active sand dunes for two months, studying how the wind moves and sorts sand particles on Mars. The site is part of Bagnold Dune Field, which lines the northwestern flank of Mars' Mount Sharp.

When the component images were taken, the rover had scuffed the edge of "Namib Dune" and collected the first of three scoops of sand from that dune. It used its scoop later to collect a second sample on Jan. 19, and a third on Jan. 22.

During processing of the third sample, an actuator in the sample-processing device did not perform as expected when commanded. This week, the Curiosity team is identifying possible reasons for the actuator's performance.

The processing device on the arm is named CHIMRA, for Collection and Handling for In-situ Martian Rock Analysis. The component that was commanded to open, but did not, is called the CHIMRA tunnel. It is opened by using the thwack actuator, a motorized component that also can deliver a firm tap to help clean sample material from a nearby sieve. Part of the third scooped sample is inside the CHIMRA tunnel after passing through a sieve. If the tunnel had opened via the thwack actuator as planned, the next step would have been to take an image of the sand inside it.

"The rover responded properly to this unexpected event," said Steve Lee, deputy project manager for Curiosity at NASA's Jet Propulsion Laboratory, Pasadena, California. "It stopped moving the actuator and halted further use of the arm and sampling system."

While diagnostic work progresses, the team also is continuing to use the remote-sensing instruments on Curiosity's mast and environmental monitoring instruments. One part of the dune investigation is to view the same location repeatedly to check for movement of sand grains caused by wind on Mars. If movement occurs, the team can use the rover's wind measurements to figure out the strength and direction of the winds that caused the movement.

On the second scoop from Namib Dune, Curiosity successfully used two different sieves in CHIMRA to prepare a portion for analysis. This two-sieve procedure had not been used previously in the rover's three-and-a-half years on Mars. The resulting portion was made up of sand grains large enough to be held back by a sieve with pores of 150 microns (0.006 inch) and small enough to pass through a sieve with pores of 1 millimeter (1,000 microns or 0.04 inch). This intermediate-grain-size portion was delivered to the rover's internal chemistry-analysis laboratory.

The third scoop was to have been processed the same way, but the science team decided this week that the portion delivered from the second scoop will suffice. When the rover drives on after diagnostic work on CHIMRA, it will have finished its investigations at Namib Dune. The mission's examination of active sand dunes -- the first ever studied up close other than on Earth -- is providing information about active dune processes in conditions with much less atmosphere and less gravity than on Earth.

Researchers are evaluating possible sites for the next use of Curosity's drill to collect rock-powder samples of the bedrock in the area.