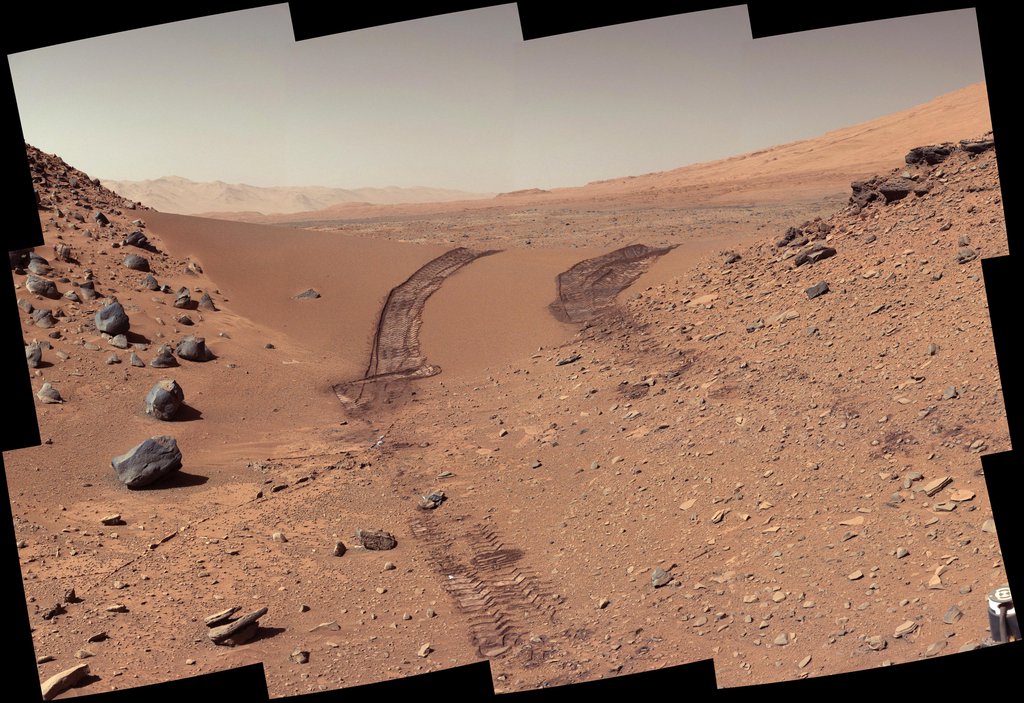 This look back at a dune that NASA's Curiosity Mars rover drove across was taken by the rover's Mast Camera (Mastcam) on Feb. 9, 2014 – the 538th Martian day, or sol, of Curiosity's mission.

This is the first photograph ever taken on the surface of Mars. It was taken by NASA’s Viking 1 spacecraft just minutes after it landed on the Red Planet on July 20, 1976.

A NASA team has found that organic, or carbon-containing, salts are likely present on Mars, with implications for the Red Planet's past habitability.

Besides adding more evidence to the idea that there once was organic matter on Mars, directly detecting organic salts would also support modern-day Martian habitability, given that on Earth, some organisms can use organic salts, such as oxalates and acetates, for energy.

“If we determine that there are organic salts concentrated anywhere on Mars, we’ll want to investigate those regions further, and ideally drill deeper below the surface where organic matter could be better preserved,” said James M. T. Lewis, an organic geochemist who led the research, published on March 30 in the Journal of Geophysical Research: Planets. Lewis is based at NASA’s Goddard Space Flight Center in Greenbelt, Maryland.

Lewis’s lab experiments and analysis of data from the Sample Analysis at Mars (SAM), a portable chemistry lab inside Curiosity’s belly, indirectly point to the presence of organic salts. But directly identifying them on Mars is hard to do with instruments like SAM, which heats Martian soil and rocks to release gases that reveal the composition of these samples. The challenge is that heating organic salts produces only simple gases that could be released by other ingredients in Martian soil.

Mass spectrometers are a useful tool that NASA scientists rely on to find out if a sample contains certain molecules.

However, Lewis and his team propose that another Curiosity instrument that uses a different technique to peer at Martian soil, the Chemistry and Mineralogy instrument, or CheMin for short, could detect certain organic salts if they are present in sufficient amounts. So far, CheMin has not detected organic salts.

Finding organic molecules, or their organic salt remnants, is essential in NASA’s search for life on other worlds. But this is a challenging task on the surface of Mars, where billions of years of radiation have erased or broken apart organic matter. Like an archeologist digging up pieces of pottery, Curiosity collects Martian soil and rocks, which may contain tiny chunks of organic compounds, and then SAM and other instruments identify their chemical structure.

Using data that Curiosity beams down to Earth, scientists like Lewis and his team try to piece together these broken organic pieces. Their goal is to infer what type of larger molecules they may once have belonged to and what those molecules could reveal about the ancient environment and potential biology on Mars.

“We’re trying to unravel billions of years of organic chemistry,” Lewis said, “and in that organic record there could be the ultimate prize: evidence that life once existed on the Red Planet.”

While some experts have predicted for decades that ancient organic compounds are preserved on Mars, it took experiments by Curiosity’s SAM to confirm this. For example, in 2018, NASA Goddard astrobiologist Jennifer L. Eigenbrode led an international team of Curiosity mission scientists who reported the detection of myriad molecules containing an essential element of life as we know it: carbon. Scientists identify most carbon-containing molecules as “organic.”

Since arriving at Mars in 2012, NASA's Curiosity rover has drilled into rocks in search of organics - molecules containing carbon. Now, Curiosity has discovered ancient organics that have been preserved in rocks for billions of years. This finding helps scientists better understand the habitability of early Mars, and it paves the way for future missions to the Red Planet.

“The fact that there’s organic matter preserved in 3-billion-year-old rocks, and we found it at the surface, is a very promising sign that we might be able to tap more information from better preserved samples below the surface,” Eigenbrode said. She worked with Lewis on this new study.

Analyzing Organic Salts in the Lab

Decades ago, scientists predicted that organic compounds on Mars could be breaking down into salts. These salts, they argued, would be more likely to persist on the Martian surface than big, complex molecules, such as the ones that are associated with the functioning of living things.

If there were organic salts present in Martian samples, Lewis and his team wanted to find out how getting heated in the SAM oven could affect what types of gases they would release. SAM works by heating samples to upwards of 1,800 degrees Fahrenheit (1,000 degrees Celsius). The heat breaks apart molecules, releasing some of them as gases. Different molecules release different gases at specific temperatures; thus, by looking at which temperatures release which gases, scientists can infer what the sample is made of.

“When heating Martian samples, there are many interactions that can happen between minerals and organic matter that could make it more difficult to draw conclusions from our experiments, so the work we’re doing is trying to pick apart those interactions so that scientists doing analyses on Mars can use this information,” Lewis said.

Lewis analyzed a range of organic salts mixed with an inert silica powder to replicate a Martian rock. He also investigated the impact of adding perchlorates to the silica mixtures. Perchlorates are salts containing chlorine and oxygen, and they are common on Mars. Scientists have long worried that they could interfere with experiments seeking signs of organic matter.

Indeed, researchers found that perchlorates did interfere with their experiments, and they pinpointed how. But they also found that the results they collected from perchlorate-containing samples better matched SAM data than when perchlorates were absent, bolstering the likelihood that organic salts are present on Mars.

Additionally, Lewis and his team reported that organic salts could be detected by Curiosity’s instrument CheMin. To determine the composition of a sample, CheMin shoots X-rays at it and measures the angle at which the X-rays are diffracted toward the detector.

Curiosity’s SAM and CheMin teams will continue to search for signals of organic salts as the rover moves into a new region on Mount Sharp in Gale Crater.

Soon, scientists will also have an opportunity to study better-preserved soil below the Martian surface. The European Space Agency’s forthcoming ExoMars rover, which is equipped to drill down to 6.5 feet, or 2 meters, will carry an instrument that will analyze the chemistry of these deeper Martian layers. NASA’s Perseverance rover doesn’t have an instrument that can detect organic salts, but the rover is collecting samples for future return to Earth, where scientists can use sophisticated lab machines to look for organic compounds.