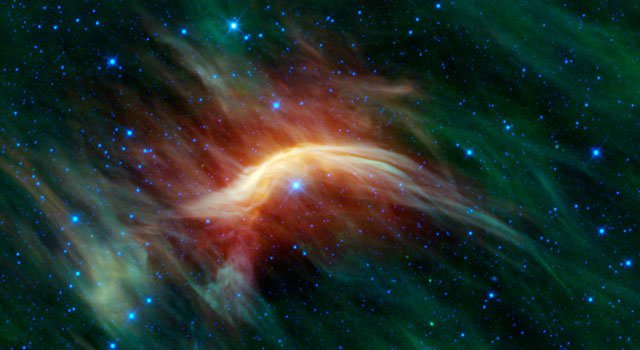 The blue star near the center of this image is Zeta Ophiuchi. When seen in visible light it appears as a relatively dim red star surrounded by other dim stars and no dust.› Full image and caption
Credit: NASA/JPL-Caltech/UCLA

Can you tell which way the central, bright blue star is traveling in this new image from WISE?

A massive star flung away from its former companion is plowing through space dust. The result is a brilliant bow shock, seen here as a yellow arc in a new image from NASA's Wide-field Infrared Survey Explorer, or WISE.

The star, named Zeta Ophiuchi, is huge, with a mass of about 20 times that of our sun. In this image, in which infrared light has been translated into visible colors we see with our eyes, the star appears as the blue dot inside the bow shock.

Zeta Ophiuchi once orbited around an even heftier star. But when that star exploded in a supernova, Zeta Ophiuchi shot away like a bullet. It's traveling at a whopping 54,000 miles per hour (or 24 kilometers per second), and heading toward the upper left area of the picture.

As the star tears through space, its powerful winds push gas and dust out of its way and into what is called a bow shock. The material in the bow shock is so compressed that it glows with infrared light that WISE can see. The effect is similar to what happens when a boat speeds through water, pushing a wave in front of it.

This bow shock is completely hidden in visible light. Infrared images like this one from WISE are therefore important for shedding new light on the region.