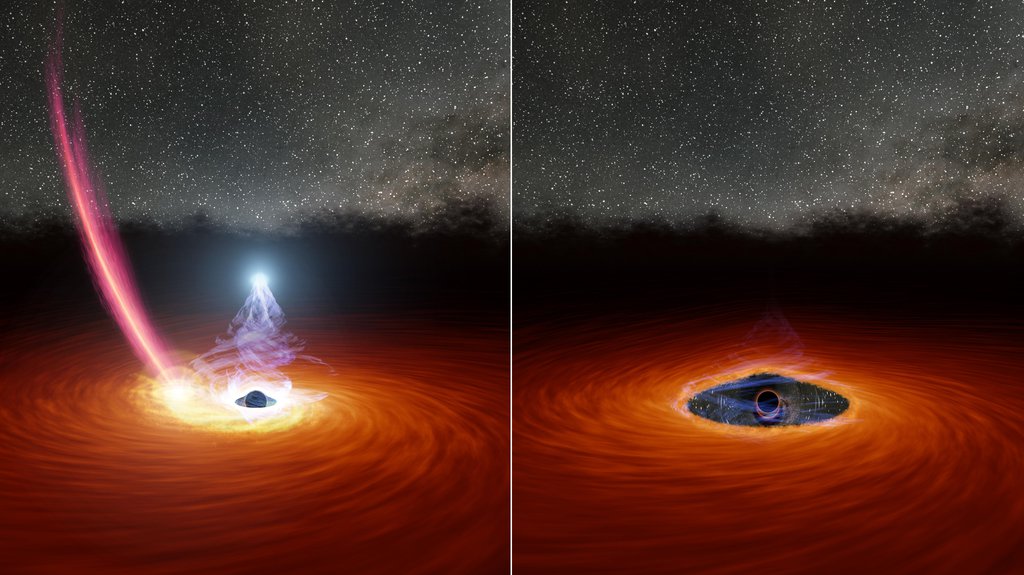 This illustration shows a black hole surrounded by a disk of gas. In the left panel, a streak of debris falls toward the disk. In the right panel, the debris has dispersed some of the gas, causing the corona to disappear.
Credit: NASA/JPL-Caltech
Full Image Details

The telltale sign that the black hole was feeding vanished, perhaps when a star interrupted the feast. The event could lend new insight into these mysterious objects.

At the center of a far-off galaxy, a black hole is slowly consuming a disk of gas that swirls around it like water circling a drain. As a steady trickle of gas is pulled into the gaping maw, ultrahot particles gather close to the black hole, above and below the disk, generating a brilliant X-ray glow that can be seen 300 million light-years away on Earth. These collections of ultrahot gas, called black hole coronas, have been known to exhibit noticeable changes in their luminosity, brightening or dimming by up to 100 times as a black hole feeds.

But two years ago, astronomers watched in awe as X-rays from the black hole corona in a galaxy known as 1ES 1927+654 disappeared completely, fading by a factor of 10,000 in about 40 days. Almost immediately it began to rebound, and about 100 days later had become almost 20 times brighter than before the event.

The X-ray light from a black hole corona is a direct byproduct of the black hole's feeding, so the disappearance of that light from 1ES 1927+654 likely means that its food supply had been cut off. In a new study in the Astrophysical Journal Letters, scientists hypothesize that a runaway star might have come too close to the black hole and been torn apart. If this was the case, fast-moving debris from the star could have crashed through part of the disk, briefly dispersing the gas.

"We just don't normally see variations like this in accreting black holes," said Claudio Ricci, an assistant professor at Diego Portales University in Santiago, Chile, and lead author of the study. "It was so strange that at first we thought maybe there was something wrong with the data. When we saw it was real, it was very exciting. But we also had no idea what we were dealing with; no one we talked to had seen anything like this."

Nearly every galaxy in the universe may host a supermassive black hole at its center, like the one in 1ES 1927+654, with masses millions or billions of times greater than our Sun. They grow by consuming the gas encircling them, otherwise known as an accretion disk. Because black holes don't emit or reflect light, they can't be seen directly, but the light from their coronas and accretion disks offers a way to learn about these dark objects.

The authors' star hypothesis is also supported by the fact that a few months before the X-ray signal disappeared, observatories on Earth saw the disk brighten considerably in visible-light wavelengths (those that can be seen by the human eye). This might have resulted from the initial collision of the stellar debris with the disk.

The disappearing event in 1ES 1927+654 is unique not only because of the dramatic change in brightness, but also because of how thoroughly astronomers were able to study it. The visible-light flare prompted Ricci and his colleagues to request follow-up monitoring of the black hole using NASA's Neutron star Interior Composition Explorer (NICER), an X-ray telescope aboard the International Space Station. In total, NICER observed the system 265 times over 15 months. Additional X-ray monitoring was obtained with NASA's Neil Gehrels Swift Observatory - which also observed the system in ultraviolet light - as well as NASA's Nuclear Spectroscopic Telescope Array (NuSTAR) and the ESA (the European Space Agency) XMM-Newton observatory (which has NASA involvement).

When the X-ray light from the corona disappeared, NICER and Swift observed lower-energy X-rays from the system so that, collectively, these observatories provided a continuous stream of information throughout the event.

Although a wayward star seems the most likely culprit, the authors note that there could be other explanations for the unprecedented event. One remarkable feature of the observations is that the overall drop in brightness wasn't a smooth transition: Day to day, the low-energy X-rays NICER detected showed dramatic variation, sometimes changing in brightness by a factor of 100 in as little as eight hours. In extreme cases, black hole coronas have been known to become 100 times brighter or dimmer, but on much longer timescales. Such rapid changes occurring continuously for months was extraordinary.

"This dataset has a lot of puzzles in it," said Erin Kara, an assistant professor of physics at the Massachusetts Institute of Technology and a coauthor of the new study. "But that's exciting, because it means we're learning something new about the universe. We think the star hypothesis is a good one, but I also think we're going to be analyzing this event for a long time."

It's possible that this kind of extreme variability is more common in black hole accretion disks than astronomers realize. Many operating and upcoming observatories are designed to search for short-term changes in cosmic phenomena, a practice known as "time domain astronomy," which could reveal more events like this one.

"This new study is a great example of how flexibility in observation scheduling allows NASA and ESA missions to study objects that evolve relatively quickly and look for longer-term changes in their average behavior," said Michael Loewenstein, a coauthor of the study and an astrophysicist for the NICER mission at the University of Maryland College Park and NASA's Goddard Space Flight Center (GSFC) in Greenbelt, Maryland. "Will this feeding black hole return to the state it was in before the disruption event? Or has the system been fundamentally changed? We're continuing our observations to find out."

NICER is an Astrophysics Mission of Opportunity within NASA's Explorer program, which provides frequent flight opportunities for world-class scientific investigations from space utilizing innovative, streamlined and efficient management approaches within the heliophysics and astrophysics science areas.

NuSTAR recently celebrated eight years in space, having launched on June 13, 2012. A Small Explorer mission led by Caltech and managed by NASA's Jet Propulsion Laboratory in Southern California for the agency's Science Mission Directorate in Washington, NuSTAR was developed in partnership with the Danish Technical University and the Italian Space Agency (ASI). The spacecraft was built by Orbital Sciences Corp. in Dulles, Virginia. NuSTAR's mission operations center is at the University of California, Berkeley, and the official data archive is at NASA's High Energy Astrophysics Science Archive Research Center at GSFC. ASI provides the mission's ground station and a mirror data archive. Caltech manages JPL for NASA.

ESA's XMM-Newton observatory was launched in December 1999 from Kourou, French Guiana. NASA funded elements of the XMM-Newton instrument package and provides the NASA Guest Observer Facility at GSFC, which supports use of the observatory by U.S. astronomers.

GSFC manages the Swift mission in collaboration with Penn State in University Park, Pennsylvania, the Los Alamos National Laboratory in New Mexico and Northrop Grumman Innovation Systems in Dulles, Virginia. Other partners include the University of Leicester and Mullard Space Science Laboratory of the University College London in the United Kingdom, Brera Observatory in Italy, and the Italian Space Agency.

For more information on NICER, visit:

For more information on XMM-Newton, visit: