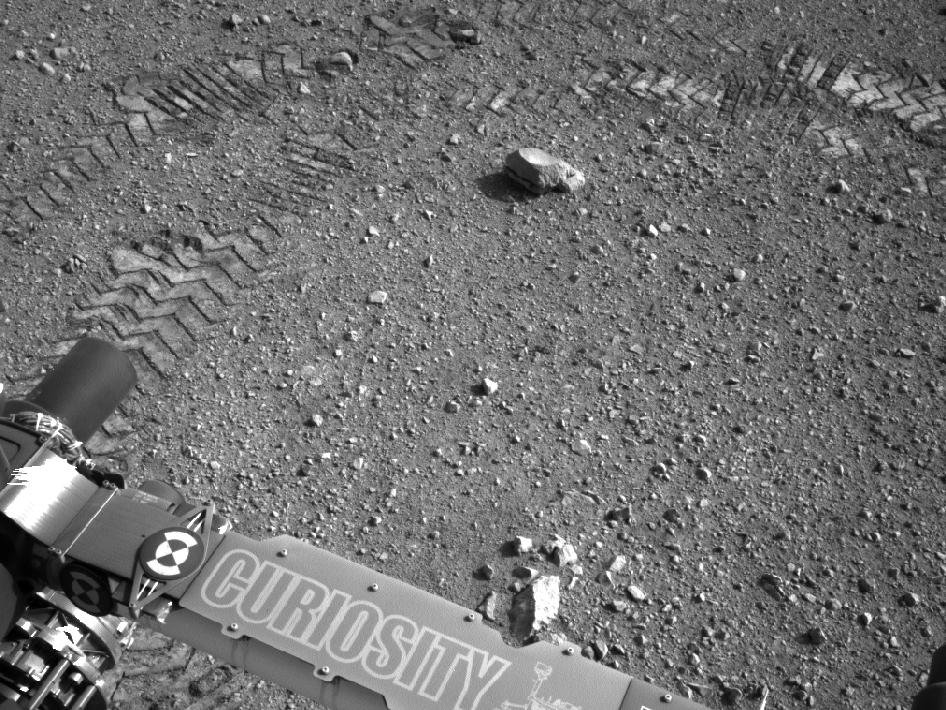 This image shows a close-up of track marks from the first test drive of NASA's Curiosity rover.› Full image and caption
Credit: NASA/JPL-Caltech 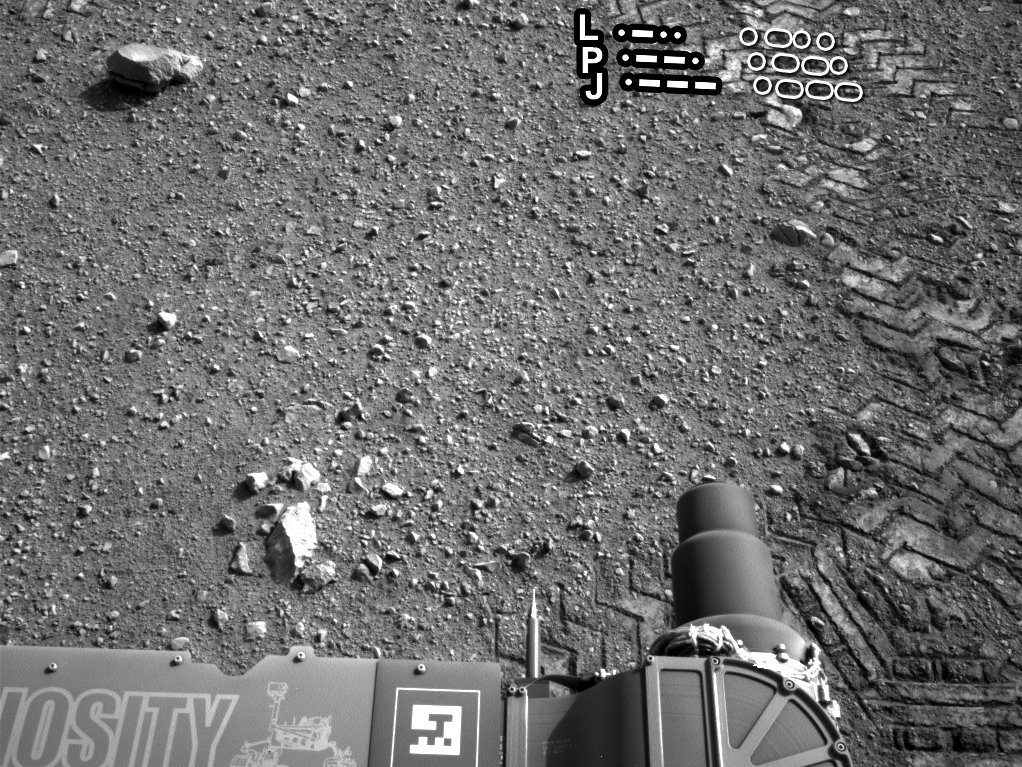 The straight lines in Curiosity's zigzag track marks are Morse code for JPL, which is short for NASA's Jet Propulsion Laboratory in Pasadena, Calif., where the rover was built and the mission is managed. › Full image and caption 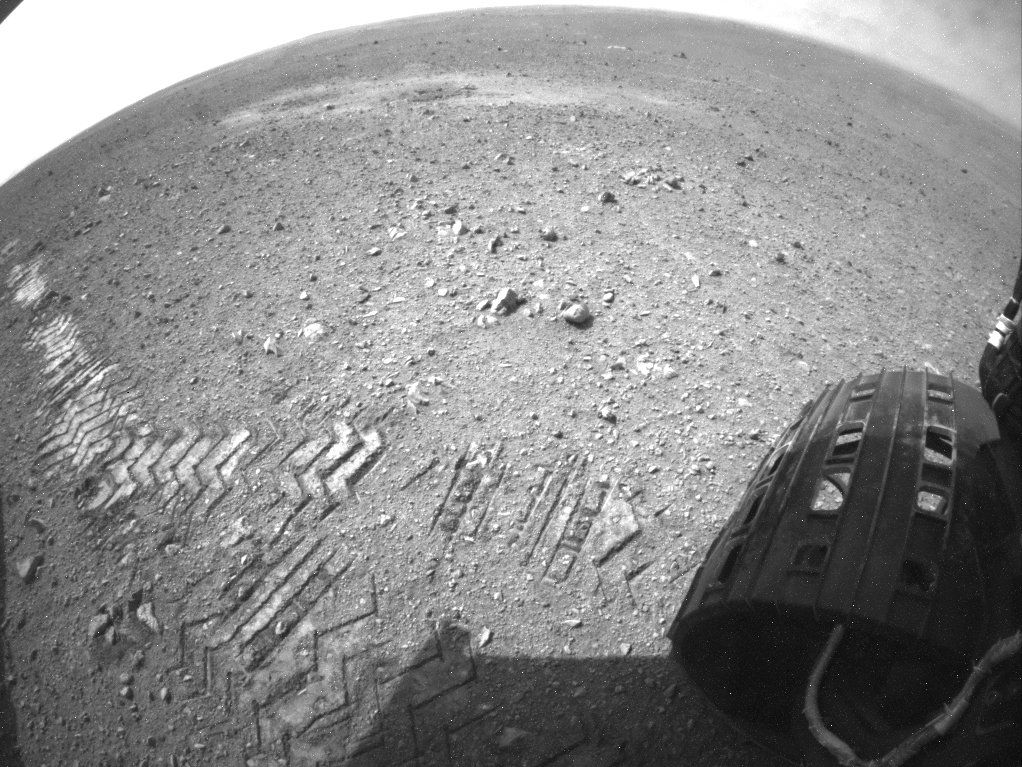 This image shows a close-up of track marks left by NASA's Curiosity rover. Holes in the rover's wheels, seen here in this view, leave imprints in the tracks that can be used to help the rover drive more accurately.› Full image and caption
Credit: NASA/JPL-Caltech

A Morse code pattern imprinted in the track marks of NASA's Curiosity will help the rover drive more accurately.

NASA's Curiosity rover took its first test stroll Wednesday Aug. 22, 2012, and beamed back pictures of its accomplishment in the form of track marks in the Martian soil. Careful inspection of the tracks reveals a unique, repeating pattern, which the rover can use as a visual reference to drive more accurately in barren terrain. The pattern is Morse code for JPL, the abbreviation for NASA's Jet Propulsion Laboratory in Pasadena, Calif., where the rover was designed and built, and the mission is managed.

"The purpose of the pattern is to create features in the terrain that can be used to visually measure the precise distance between drives," said Matt Heverly, the lead rover driver for Curiosity at JPL.

This driving tool, called visual odometry, allows the rover to use images of landscape features to determine if it has traveled as far as predicted, or if its wheels have slipped. For example, when the rover drives on high slopes or across loose soil, it will routinely stop to check its progress. By measuring its distance relative to dozens of prominent features like pebbles or shadows on rocks -- or patterns in its tracks -- the rover can check how much its wheels may have slipped. If Curiosity has not slipped too much, it can then re-plan the next leg of its drive, taking its actual position into account.

"Visual odometry will enable Curiosity to drive more accurately even in high-slip terrains, aiding its science mission by reaching interesting targets in fewer sols, running slip checks to stop before getting too stuck, and enabling precise driving," said rover driver Mark Maimone, who led the development of the rover's autonomous driving software.

The Morse code imprinted on all six wheels will be particularly handy when the terrain is barren. Curiosity won't be able to read the Morse code symbols in the track marks directly, but it will note that the pattern is a high-contrast feature. This will give the rover the anchor it needs in an otherwise featureless terrain.

"Imagine standing in front of a picket fence, and then closing your eyes and shifting to the side. When you open your eyes, you wouldn't be able to tell how many pickets you passed. If you had one picket that was a different shape though, you could always use that picket as your reference," said Heverly. "With Curiosity, it's a similar problem in featureless terrain like sand dunes. The hole pattern in the wheels gives us one 'big picket' to look at."

NASA's Mars Exploration rovers Spirit and Opportunity also used visual odometry to ensure accurate driving in difficult terrains. Their wheels had been bolted to their landing platform, leaving holes that left distinguishing marks in their tracks. Those marks proved critical for the visual odometry system on Opportunity when it traversed the relatively featureless terrain at Meridian Planum. Opportunity is still trekking on Mars more than eight years after setting down on the Red Planet.

Curiosity likewise has holes in its wheels, only in the shape of Morse code letters.

"Even though Curiosity didn't need to be bolted down, we wanted to have the holes anyway. The mechanical team suggested multiple smaller holes rather than one large one like the Mars Exploration Rovers had, and one earlier design had spelled out letters in a cleat pattern, so I proposed using a Morse code version," said Maimone. "And the rest is history."