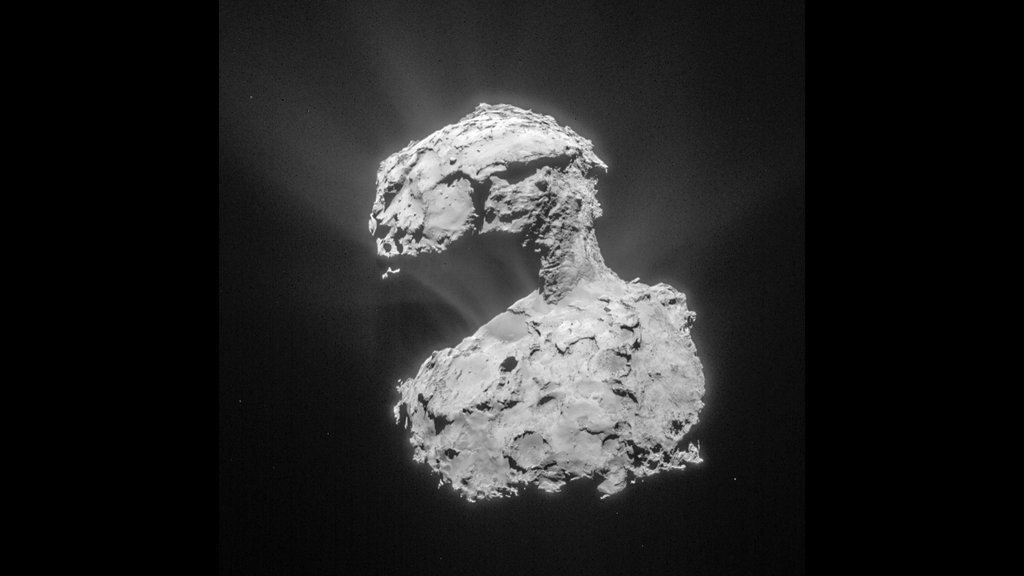 This image, by the Rosetta navigation camera, was taken from a distance of about 53 miles (86 kilometers) from the center of Comet 67P/Churyumov-Gerasimenko on March 14, 2015. The image has a resolution of 24 feet (7 meters) per pixel and is cropped and processed to bring out the details of the comet's activity.
Credit: ESA/Rosetta/NAVCAM 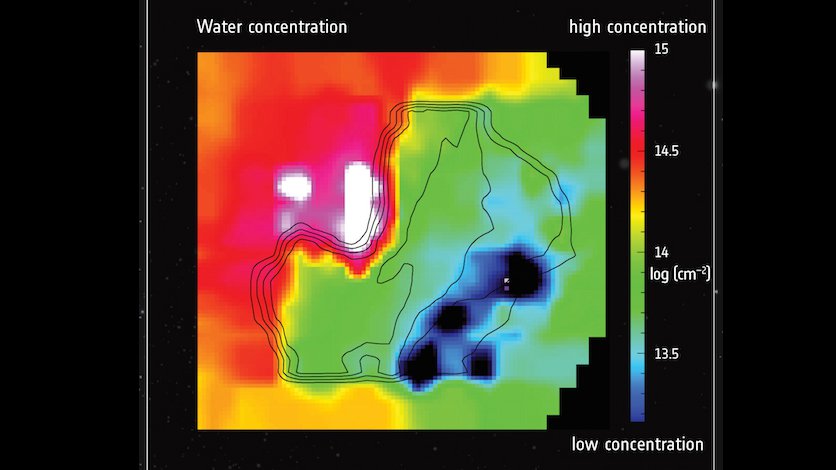 This color map, based on data collected on September 7, 2014, by MIRO's (Microwave Instrument for Rosetta Orbiter), shows the concentration of water around comet 67P/Churyumov-Gerasimenko. In the areas highlighted in blue and green, there is a lower concentration of water. Red, pink and white areas highlight regions of higher concentration. The black contours show emission at submillimeter wavelengths measured by MIRO, with increasing emission from the edges inwards.
Credit: ESA/Rosetta/MIRO

Data from NASA's MIRO instrument on board ESA's Rosetta spacecraft have been used to generate maps of the distribution of water in the coma of 67P/Churyumov-Gerasimenko.

Since last September, scientists using NASA's Microwave Instrument for Rosetta Orbiter (MIRO) on the European Space Agency's Rosetta spacecraft have generated maps of the distribution of water in the coma of comet 67P/Churyumov-Gerasimenko, as the comet's orbit brings it closer to the sun.

MIRO is able to detect water in the coma by measuring the direct emission from water vapor in the coma and by observing absorption of radiation from the nucleus at water-specific frequencies as the radiation passed through the coma.

On Sept. 7, 2014, when Rosetta was 36 miles (58 kilometers) from the center of the comet, the MIRO team obtained their first map of the nucleus of 67P/C-G and its surroundings. They discovered the highest density of water just above the comet's neck, close to the north pole of the comet's rotation axis. In this narrow region, the number of water molecules is up to two orders of magnitude higher than elsewhere in the coma. Lower but still substantial amounts of water were detected over on the day side of the nucleus up to the terminator between the illuminated and dark side. The lowest amounts of water are found on the comet's night side -- particularly over its southern polar regions. This could be due to either local outgassing or circulation effects within the coma, causing water to flow from the day to the night side.

A European Space Agency blog post on the MIRO data is online at:

For a deeper dive into the science the blog post is based on, please visit:

The MIRO instrument is a small and lightweight spectrometer that can map the abundance, temperature and velocity of cometary water vapor and other molecules that the nucleus releases. It can also measure the temperature up to about one inch (two centimeters) below the surface of the comet's nucleus. One reason the subsurface temperature is important is that the observed gases likely come from sublimating ices beneath the surface. By combining information on both the gas and the subsurface, MIRO is able to study this process in detail.

Comets are time capsules containing primitive material left over from the epoch when the sun and its planets formed. Rosetta is the first spacecraft to witness at close proximity how a comet changes as it is subjected to the increasing intensity of the sun's radiation. Observations will help scientists learn more about the origin and evolution of our solar system and the role comets may have played in seeding Earth with water, and perhaps even life.