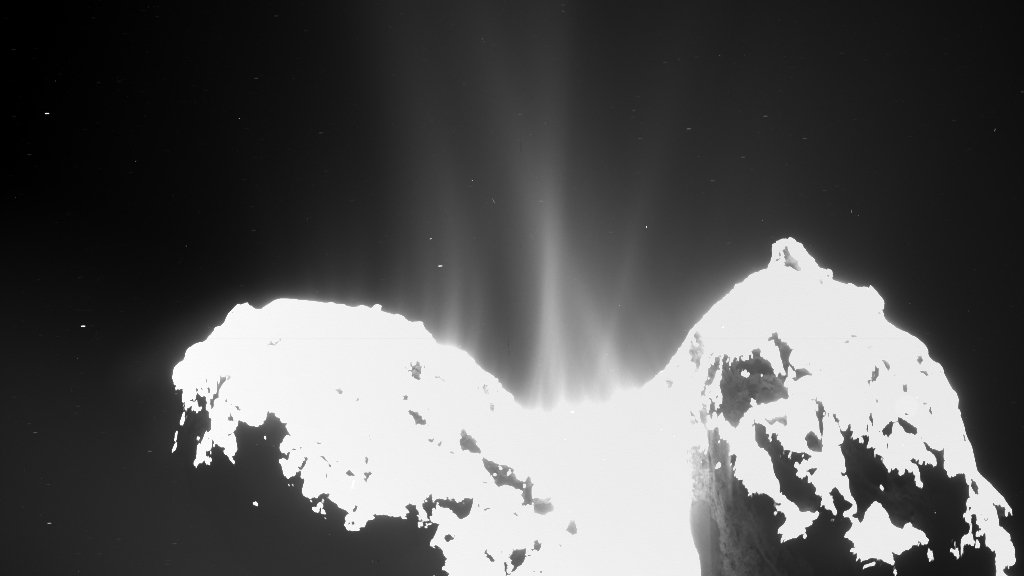 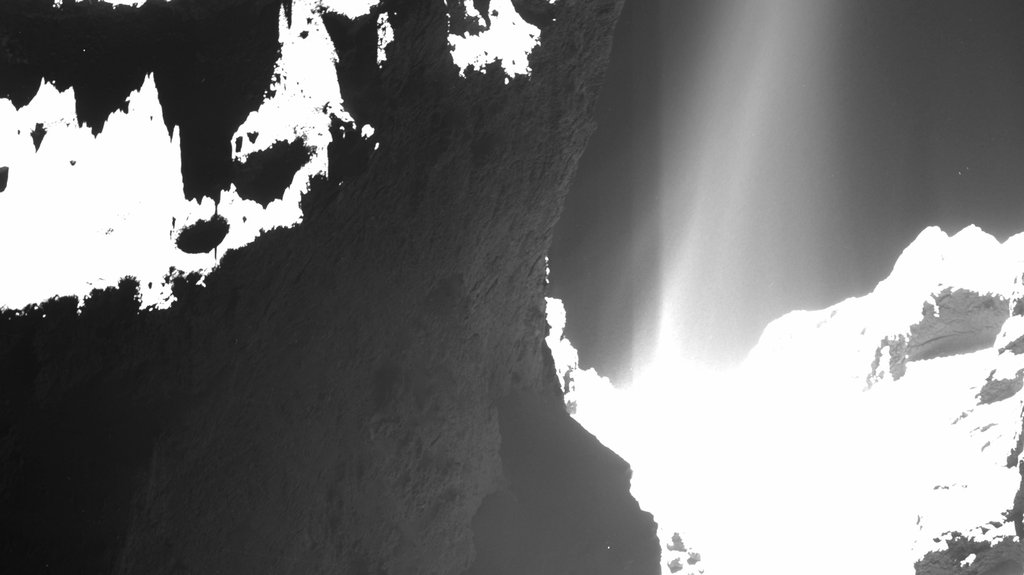 Jets of cometary activity can be seen along almost the entire body of the comet.› Full image and caption
Credit: ESA/Rosetta/MPS/UPD/LAM/IAA/SSO/ INTA/UPM/DASP/IDA

Rosetta's comet destination is beginning to show a clearly visible increase in activity.

This image of comet 67P/Churyumov-Gerasimenko, taken by Rosetta's Optical, Spectroscopic, and Infrared Remote Imaging System (OSIRIS) on Sept. 20, from a distance of 4.5 miles (7.2 kilometers), shows jets of dust and gas streaming into space from the neck of the comet's nucleus.

Images of the comet nucleus, taken by Rosetta earlier in the summer, showed that the distinct jets of dust and gas emanating from the comet were originated from the neck region, which connects the comet's two lobes. Images obtained by OSIRIS now show jets of dust along almost the entire length of the comet.

On Nov. 12, the Rosetta spacecraft will release its Philae lander at 3:03 a.m. EST / 1:03 a.m. PST (Earth Receive Time). Touchdown of Philae on Site J is expected about seven hours later, at around 11 a.m. EST / 8 a.m. PST. Rosetta is the first mission to attempt a soft landing on a comet.

While 67P's overall activity is clearly increasing, the mission's designated landing site, "J," located on the head of the comet, still seems to be rather quiet. However, there is some indication that new active areas are waking up about half a mile (one kilometer) from J. These will allow the lander's instruments to study the comet's activity from an even closer distance.

Launched in March 2004, Rosetta was reactivated in January 2014 after a record 957 days in hibernation. Composed of an orbiter and lander, Rosetta's objectives since arriving at comet 67P/Churyumov-Gerasimenko earlier this month have been to study the celestial object up close in unprecedented detail, prepare for landing a probe on the comet's nucleus in November and, following the landing, track the comet's changes as it sweeps past the sun.

The scientific imaging system OSIRIS was built by a consortium led by the Max Planck Institute for Solar System Research (Germany) in collaboration with CISAS, University of Padova (Italy), the Laboratoire d'Astrophysique de Marseille (France), the Instituto de Astrofísica de Andalucia, CSIC (Spain), the Scientific Support Office of the European Space Agency (The Netherlands), the Instituto Nacional de Técnica Aeroespacial (Spain), the Universidad Politéchnica de Madrid (Spain), the Department of Physics and Astronomy of Uppsala University (Sweden), and the Institute of Computer and Network Engineering of the TU Braunschweig (Germany). OSIRIS was financially supported by the national funding agencies of Germany (DLR), France (CNES), Italy (ASI), Spain (MEC), and Sweden (SNSB) and the ESA Technical Directorate.