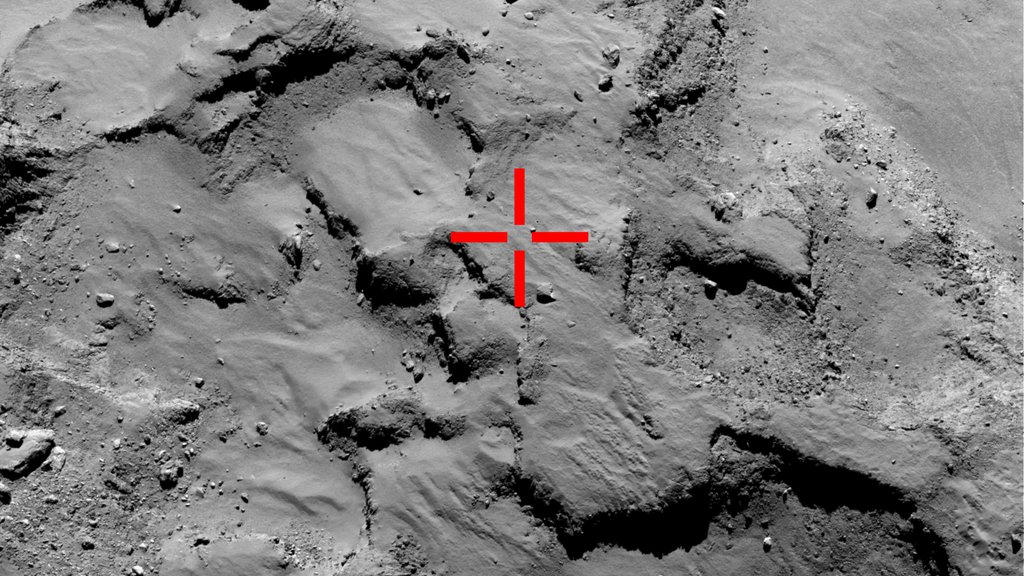 This image of comet 67P/Churyumov-Gerasimenko marks the first touchdown point of the Philae lander of the European Space Agency's Rosetta mission. The image was taken by the Onboard Scientific Imaging System (OSIRIS) on the Rosetta orbiter from a distance of about 19 miles (30 kilometers) on Sept. 14, 2014, nearly two months before Philae's Nov. 12 landing.› Full image and caption

The Rosetta mission's Philae comet lander bounced off the surface twice before coming to rest on the surface. Many of its science instruments have already sent back data.

On Wednesday, Nov. 12, the European Space Agency's Rosetta mission successfully landed on the surface of comet 67P/Churyumov-Gerasimenko. Descending at a speed of about 2 mph (3.2 kilometers per hour) the lander, called "Philae," first touched down and its signal was received at 8:03 a.m. PST (11:03 a.m. EST).

Partially due to anchoring harpoons not firing, and the comet's low gravity (a hundred-thousand times less than that of Earth), Philae bounced off the surface and flew up to about six-tenths of a mile (1 kilometer) both above the comet's surface as well as downrange. At 9:53 a.m. PST (12:53 p.m. EST), almost two hours after first contact, Philae again touched down. A second, more modest bounce resulted, again sending it airborne. Philae's third contact with the comet's nucleus was the charm. At 10 a.m. PST (1 p.m. EST), the Rosetta mission's Philae lander became the first spacecraft to soft-land on a comet.

Rosetta mission controllers believe Philae alighted in a hole, or crevice, about six feet (two meters) in diameter and six feet (two meters) deep and that it is lying on its side. While the lander remains unanchored to the surface, it remains stable. and eight of its 10 instruments have already begun sending back data. The science team is working on its next moves.

"Philae is on the surface and doing a marvelous job, working very well, and we can say we have a very happy lander," said Paolo Ferri, ESA's head of mission operations at the European Space Operations Center, Darmstadt, Germany.

Teams are still working to confirm the location and the overall power and thermal situation on board. The lander did receive power from some of its solar panels. It appears that some parts of the lander were in shadow during the time that last night's surface telemetry data were being transmitted.

Launched in March 2004, Rosetta was reactivated in January 2014 after a record 957 days in hibernation. The mission consists of an orbiter and lander. Its objectives since arriving at comet 67P/Churyumov-Gerasimenko this summer have been to study the celestial object up close in unprecedented detail, and prepare for yesterday's landing. The orbiter will continue tracking the comet's changes as it sweeps past the sun.

The scientific imaging system OSIRIS -- for Onboard Scientific Imaging System -- was built by a consortium led by the Max Planck Institute for Solar System Research (Germany) in collaboration with CISAS, University of Padua (Italy), the Laboratoire d'Astrophysique de Marseille (France), the Instituto de Astrofísica de Andalucia, CSIC (Spain), the Scientific Support Office of the European Space Agency (The Netherlands), the Instituto Nacional de Técnica Aeroespacial (Spain), the Universidad Politéchnica de Madrid (Spain), the Department of Physics and Astronomy of Uppsala University (Sweden), and the Institute of Computer and Network Engineering of the TU Braunschweig (Germany). OSIRIS was financially supported by the national funding agencies of Germany (DLR), France (CNES), Italy (ASI), Spain (MEC), and Sweden (SNSB) and the ESA Technical Directorate. Rosetta is a European Space Agency mission with contributions from its member states and NASA.