Rosetta: To Chase a Comet 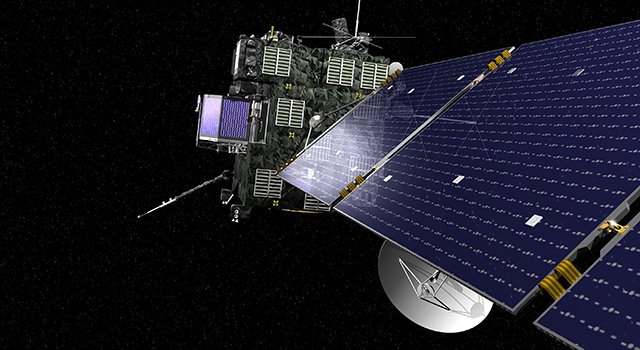 The Rosetta spacecraft "woke up" after a record 957 days of hibernation. The first communication from the spacecraft arrived at the European Space Operations Center in Darmstadt, Germany, at 7:18 p.m. local time (1:18 p.m. EST / 10:18 a.m. PST). The signal was received by ground stations at the Goldstone, Calif., and Canberra, Australia, complexes of NASA's Deep Space Network.

Rosetta, heading toward comet 67P/Churyumov-Gerasimenko, is an international mission spearheaded by the European Space Agency with support and instruments provided by NASA.

Comets are among the most beautiful and least understood nomads of the night sky. To date, half a dozen of these most heavenly of heavenly bodies have been visited by spacecraft in an attempt to unlock their secrets. All these missions have had one thing in common: the high-speed flyby. Like two ships passing in the night (or one ship and one icy dirtball), they screamed past each other at hyper velocity -- providing valuable insight, but fleeting glimpses, into the life of a comet. That is, until Rosetta.

NASA is participating in the European Space Agency's Rosetta mission, whose goal is to observe one such space-bound icy dirt ball from up close -- for months on end. The spacecraft, festooned with 25 instruments between its lander and orbiter (including three from NASA), is programmed to "wake up" from hibernation on Jan. 20. After a check-out period, it will monitor comet 67P/Churyumov-Gerasimenko as it makes its nosedive into, and then climb out of, the inner solar system. Over 16 months, during which old 67P is expected to transform from a small, frozen world into a roiling mass of ice and dust, complete with surface eruptions, mini-earthquakes, basketball-sized, fluffy ice particles and spewing jets of carbon dioxide and cyanide.

"We are going to be in the cometary catbird seat on this one," said Claudia Alexander, project scientist for U.S. Rosetta from NASA's Jet Propulsion Laboratory in Pasadena, Calif. "To have an extended presence in the neighborhood of a comet as it goes through so many changes should change our perspective on what it is to be a comet."

Since work began on Rosetta back in 1993, scientists and engineers from all over Europe and the United States have been combining their talents to build an orbiter and a lander for this unique expedition. NASA's contribution includes three of the orbiter's instruments (an ultraviolet spectrometer called Alice; the Microwave Instrument for Rosetta Orbiter; and the Ion and Electron Sensor. NASA is also providing part of the electronics package for an instrument called the Double Focusing Mass Spectrometer, which is part of the Swiss-built Rosetta Orbiter Spectrometer for Ion and Neutral Analysis instrument. NASA is also providing U.S. science investigators for selected non-U.S. instruments and is involved to a greater or lesser degree in seven of the mission's 25 instruments. NASA's Deep Space Network provides support for ESA's Ground Station Network for spacecraft tracking and navigation.

"All the instruments aboard Rosetta and the Philae lander are designed to work synergistically," said Sam Gulkis of JPL, the principal investigator for the Microwave Instrument for Rosetta Orbiter. "They will all work together to create the most complete picture of a comet to date, telling us how the comet works, what it is made of, and what it can tell us about the origins of the solar system."

The three NASA-supplied instruments are part of the orbiter's scientific payload. Rosetta's Microwave Instrument for Rosetta Orbiter specializes in the thermal properties. The instrument combines a spectrometer and radiometer, so it can sense temperature and identify chemicals located on or near the comet's surface, and even in the dust and ices jetting out from it. The instrument will also see the gaseous activity through the dusty cloud of material. Rosetta scientists will use it to determine how different materials in the comet change from ice to gas, and to observe how much it changes in temperature as it approaches the sun.

Like the Microwave for Rosetta Orbiter, the Alice instrument contains a spectrometer. But Alice looks at the ultraviolet portion of the spectrum. Alice will analyze gases in the coma and tail and measure the comet's production rates of water and carbon monoxide and dioxide. It will provide information on the surface composition of the nucleus, and make a potentially key measurement of argon, which will be a big clue about what the temperature was in the primordial solar system when the comet's nucleus originally formed (more than 4.6 billion years ago).

The Rosetta orbiter's Ion and Electron Sensor is part of a suite of five instruments to characterize the plasma environment of the comet -- in particular, its coma, which develops when the comet approaches the sun. The sun's outer atmosphere, the solar wind, interacts with the gas flowing out from the comet, and the instrument will measure the charged particles it comes in contact with as the orbiter approaches the comet's nucleus.

All three instruments are slated to begin science collection by early summer. Along with the pure science they will provide, their data are expected to help Rosetta project management determine where to attempt to land their Philae lander on the comet in November.

"It feels good to be part of a team that is on the cusp of making some space exploration history," said Art Chmielewski, NASA's project manager for US Rosetta, based at JPL. "There are so many exciting elements and big milestones coming up in this mission that it feels like I should buy a ticket and a big box of popcorn. Rosetta is going to be a remarkable ride."

Rosetta is a mission of the European Space Agency, Paris, with contributions from its member states and NASA. Rosetta's Philae lander is provided by a consortium led by the German Aerospace Center, the Max Planck Institute for Solar System Research, the French National Space Agency and the Italian Space Agency. JPL manages the U.S. contribution of the Rosetta mission for NASA's Science Mission Directorate in Washington. The Microwave Instrument for the Rosetta Orbiter was built at JPL and JPL is home to its principal investigator, Samuel Gulkis. The Southwest Research Institute, San Antonio, developed the Rosetta orbiter's Ion and Electron Sensor (IES) and is home to its principal investigator, James Burch. The Southwest Research Institute, Boulder, Colo., developed the Alice instrument and is home to its principal investigator, Alan Stern.

More information about Rosetta is available online at: http://www.esa.int/rosetta and http://rosetta.jpl.nasa.gov .