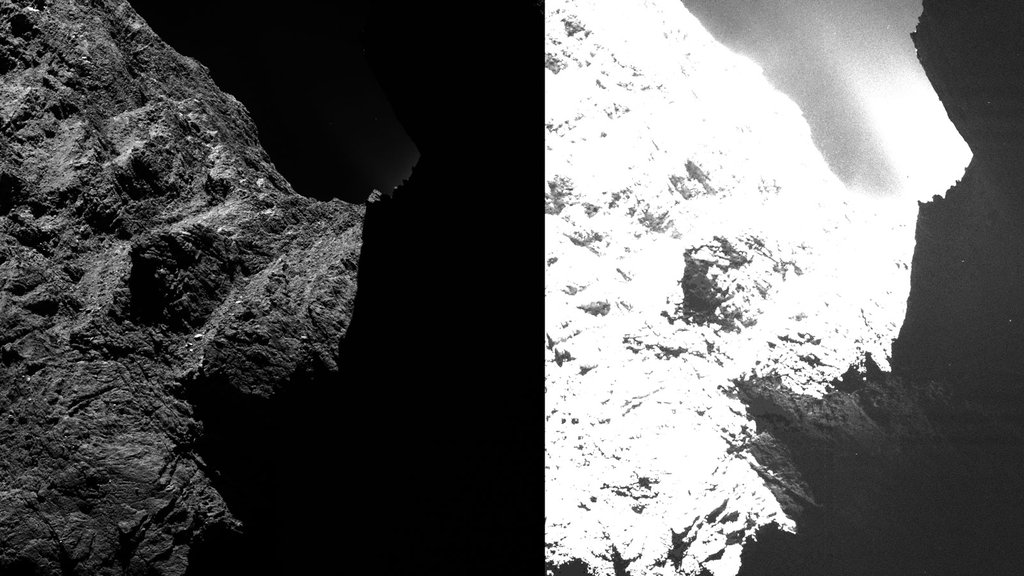 In this side-by-side view, an image of comet 67P/Churyumov-Gerasimenko obtained on October 30, 2014 by the OSIRIS scientific imaging system on the Rosetta spacecraft is displayed with two different saturation levels. While in the left image the right half is obscured by darkness, in the right image surface structures become visible. The image was taken from a distance of approximately 18.6 miles (30 kilometers) ESA/Rosetta/MPS for OSIRIS Team MPS/UPD/LAM/IAA/SSO/INTA/UPM/DASP/IDA › Full image and caption 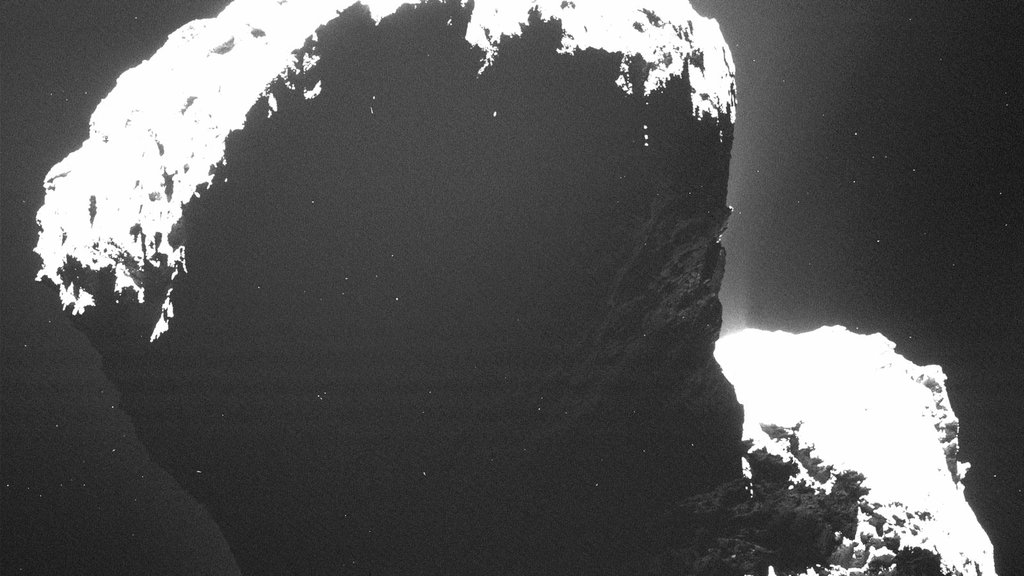 This is a rare glance at the dark side of comet 67P/Churyumov-Gerasimenko. Light backscattered from dust particles in the comet's coma reveals a hint of surface structures.› Full image and caption
Credit: ESA/Rosetta/MPS for OSIRIS Team MPS/UPD/LAM/IAA/SSO/INTA/UPM/DASP/IDA 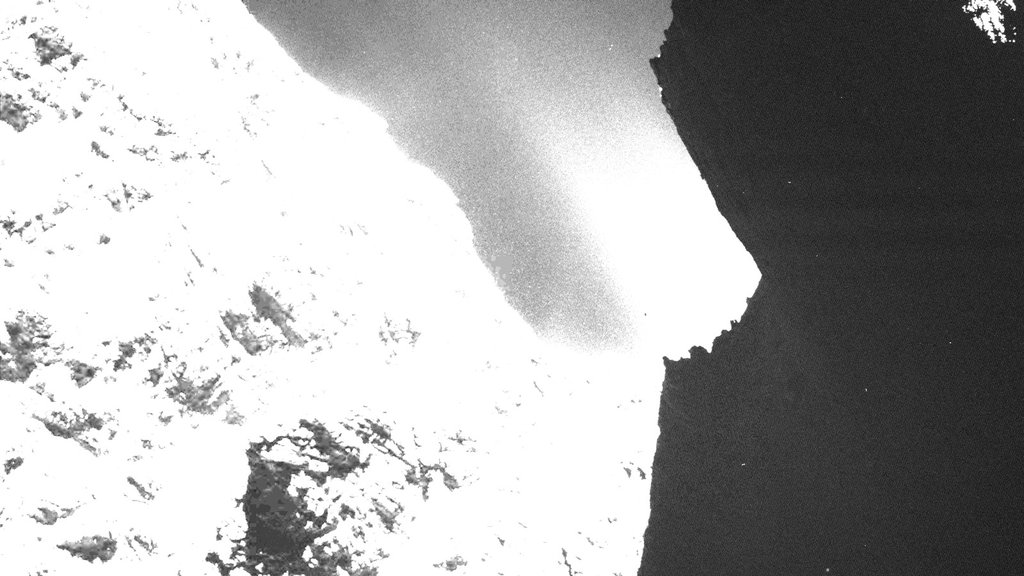 This image of comet 67P/Churyumov-Gerasimenko was obtained on October 30, 2014 by the OSIRIS scientific imaging system on the Rosetta spacecraft.› Full image and caption
Credit: ESA/Rosetta/MPS for OSIRIS Team MPS/UPD/LAM/IAA/SSO/INTA/UPM/DASP/IDA

• Landing site gets a name

• Camera gets sneak peek of the comet's "dark side"

The mission's Philae (fee-LAY) lander is scheduled to touch down on comet 67P/Churyumov-Gerasimenko on Wednesday, Nov. 12 at 7:35 a.m PST/10:35 a.m. EST. A signal confirming the landing is expected about 8:02 a.m. PST/11:02 a.m. EST. If all goes as planned with this complex engineering feat, it will be the first-ever soft landing of a spacecraft on a comet.

The landing site, formerly known simply as Site J, now has an official name: Agilkia. The name, chosen after an ESA public essay competition, is in keeping with the mission's Egyptian theme. It refers to an island on the Nile where ancient buildings were relocated after the island Philae flooded. One hundred fifty people nominated Agilkia, including the overall winner, Alexandre Brouste from France. He has been invited to watch the landing activities at Rosetta's mission control in Darmstadt, Germany.

After touchdown on Nov. 12, the Philae lander will obtain the first images ever taken from a comet's surface. It will also drill into the surface to study the composition, and witness close up how a comet changes as its exposure to the sun varies. Philae can remain active on the surface for about two-and-a-half days. Its mothership, the Rosetta spacecraft, will remain in orbit around the comet through 2015. The orbiter will continue detailed studies of the comet as it approaches the sun and then moves away.

In addition to their well-deserved reputation as beautiful cosmic objects, comets hold vital clues about our solar system's history. They are considered primitive building blocks of the solar system that are literally frozen in time, and they may have played a part in "seeding" Earth with water and, possibly, the basic ingredients for life.

NASA provided three of the 16 instruments on board the Rosetta orbiter. The NASA instruments are:

• The Microwave Instrument for Rosetta Orbiter (MIRO) studies the process by which gas and dust leave the surface of the comet nucleus to form the tail and the coma. MIRO is capable of observing water, carbon monoxide, ammonia and methanol.

• Alice, an ultraviolet spectrometer, analyzes gases in the comet's coma and tail; measures how fast the comet produces water, carbon monoxide and carbon dioxide (clues to the surface composition of the nucleus); and measures argon levels. These measurements help determine the temperature of the solar system when the nucleus formed more than 4.6 billion years ago.

• Ion and Electron Sensor (IES) is part of a suite of five instruments to analyze the comet's plasma environment and measure charged particles in the sun's outer atmosphere as they interact with gas flowing from the comet during Rosetta's approach to the sun.

Rosetta launched in March 2004 and spent 957 days in "hibernation" as it zoomed through the darkness of space. It was "brought back to life" in January 2014 to prepare for its August arrival in orbit around comet 67P/Churyumov-Gerasimenko. Since August, Rosetta has been capturing sneak peeks of what lies ahead. Images have revealed stunning structures on the areas of the comet that are visible and illuminated. These features include steep ravines, sharp cliffs and numerous boulders.

New images from the spacecraft's scientific imaging system, OSIRIS, give us a first glimpse of the dark, southern side of the comet. This side has faced away from the sun for a while, hiding its shape and surface features. The new images take advantage of slight illumination from light scattered by dust particles in the comet's coma.

For information about how to watch coverage of the Nov. 12 landing on NASA TV and online, visit: http://www.jpl.nasa.gov/news/news.php?feature=4367