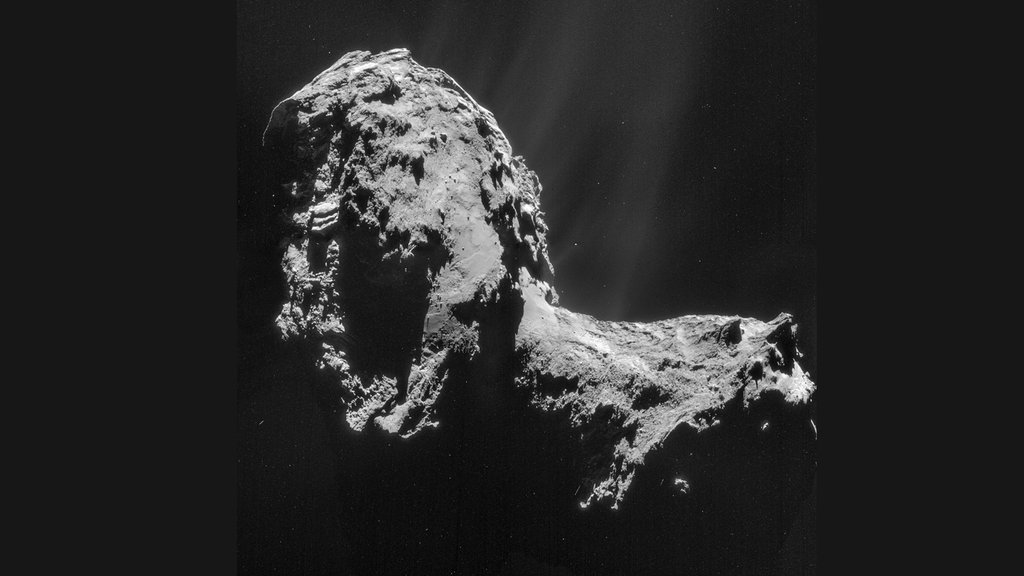 This composite is a mosaic comprising four individual NAVCAM images taken from 19 miles (31 kilometers) from the center of comet 67P/Churyumov-Gerasimenko on Nov. 20, 2014.› Full image and caption
Credit: ESA/Rosetta/NAVCAM

A Rosetta spacecraft instrument has found that the composition of comet 67P/Churyumov-Gerasimenko's water vapor is significantly different from that found on Earth.

The question about the origin of oceans on Earth is one of the most important questions with respect to the formation of our planet and the origin of life. The most popular theory is that water was brought by impacts of comets and asteroids. Data from the Rosetta Orbiter Spectrometer for Ion and Neutral Analysis (ROSINA) instrument aboard the European Space Agency's Rosetta spacecraft indicate that terrestrial water did not come from comets like 67P/Churyumov-Gerasimenko. The findings were published today in the journal Science.

The key to determining where the water originated is in its isotopic "flavor." That is, by measuring the level of deuterium - a heavier form of hydrogen. By comparing the ratio of deuterium to hydrogen in different objects, scientists can identify where in the solar system that object originated. And by comparing the D/H ratio, in Earth's oceans with that in other bodies, scientists can aim to identify the origin of our water.

The ROSINA instrument on the Rosetta spacecraft has found that the composition of comet 67P/Churyumov-Gerasimenko's water vapor is significantly different from that found on Earth.

The value for the D/H ratio on the comet is more than three times the terrestrial value. This is among the highest-ever-measured values in the solar system. That means it is very unlikely that comets like 67P/Churyumov-Gerasimenko are responsible for the terrestrial water.

The D/H ratio is the ratio of a heavier hydrogen isotope, called deuterium, to the most common hydrogen isotope. It can provide a signature for comparison across different stages of a planet's history.

"We knew that Rosetta's in situ analysis of this comet was always going to throw us surprises," said Matt Taylor, Rosetta's project scientist from the European Space Research and Technology Center, Noordwijk, the Netherlands. "The bigger picture of solar-system science, and this outstanding observation, certainly fuel the debate as to where Earth got its water."

Almost 30 years ago (1986) the mass spectrometers on board the European Giotto mission to comet Halley could, for the first time, determine D/H ratio in a comet. It turned out to be twice the terrestrial ratio. The conclusion at that time was that Oort cloud comets, of which Halley is a member, cannot be the responsible reservoir for our water. Several other Oort cloud comets were measured in the next 20 years, all displaying very similar D/H values compared to Halley. Subsequently, models that had comets as the origin of the terrestrial water became less popular.

This changed when, thanks to the European Space Agency's Herschel spacecraft, the D/H ratio was determined in comet Hartley 2, which is believed to be a Kuiper Belt comet. The D/H ratio found was very close to our terrestrial value -- which was not really expected. Most models on the early solar system claim that Kuiper Belt comets should have an even higher D/H ratio than Oort cloud comets because Kuiper Belt objects formed in a colder region than Oort cloud comets.

The new findings of the Rosetta mission make it more likely that Earth got its water from asteroid-like bodies closer to our orbit and/or that Earth could actually preserve at least some of its original water in minerals and at the poles.

"Our finding also disqualifies the idea that Jupiter family comets contain solely Earth ocean-like water," said Kathrin Altwegg, principal investigator for the ROSINA instrument from the University of Bern, Switzerland, and lead author of the Science paper. "It supports models that include asteroids as the main delivery mechanism for Earth's oceans."

Comets are time capsules containing primitive material left over from the epoch when the sun and its planets formed. Rosetta's lander obtained the first images taken from a comet's surface and will provide analysis of the comet's possible primordial composition. Rosetta will be the first spacecraft to witness at close proximity how a comet changes as it is subjected to the increasing intensity of the sun's radiation. Observations will help scientists learn more about the origin and evolution of our solar system and the role comets may have played in seeding Earth with water, and perhaps even life.

Rosetta is an ESA mission with contributions from its member states and NASA. The Jet Propulsion Laboratory, Pasadena, California, a division of the California Institute of Technology in Pasadena, manages the U.S. contribution of the Rosetta mission for NASA's Science Mission Directorate in Washington. JPL also built the MIRO instrument and hosts its principal investigator, Samuel Gulkis. The Southwest Research Institute (San Antonio and Boulder) developed the Rosetta orbiter's IES and Alice instruments, and hosts their principal investigators, James Burch (IES) and Alan Stern (Alice).