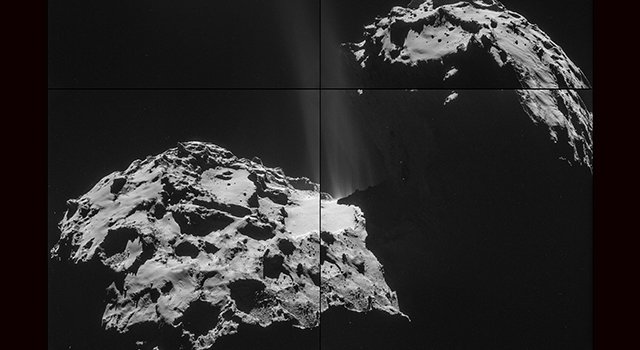 An image taken by the ESA Rosetta spacecraft shows jets of dust and gas escaping from the nucleus of comet 67P/Churyumov-Gerasimenko.› Full image and caption
Credit: ESA/Rosetta/NAVCAM

An image taken by the ESA Rosetta spacecraft shows jets of dust and gas escaping from the nucleus of comet 67P/Churyumov-Gerasimenko.

The four images that make up a new montage of comet 67P/Churyumov-Gerasimenko were taken on September 26, 2014 by the European Space Agency's Rosetta spacecraft. At the time, Rosetta was about 16 miles (26 kilometers) from the center of the comet.

In the montage, a region of jet activity can be seen at the neck of the comet. These jets, originating from several discrete locations, are a product of ices sublimating and gases escaping from inside the nucleus.

The overlapping and slightly dissimilar angles of the four images that compose the montage are a result of the combined effect of the comet rotating between the first and last images taken in the sequence (about 10 degrees over 20 minutes), and the spacecraft movement during that same time.

Launched in March 2004, Rosetta was reactivated in January 2014 after a record 957 days in hibernation. Rosetta is composed of an orbiter and lander. Its objectives since arriving at comet 67P/Churyumov-Gerasimenko earlier this month are to study the celestial object up close in unprecedented detail, prepare for landing a probe on the comet's nucleus in November, and after the landing, track the comet's changes through 2015 as it sweeps past the sun.