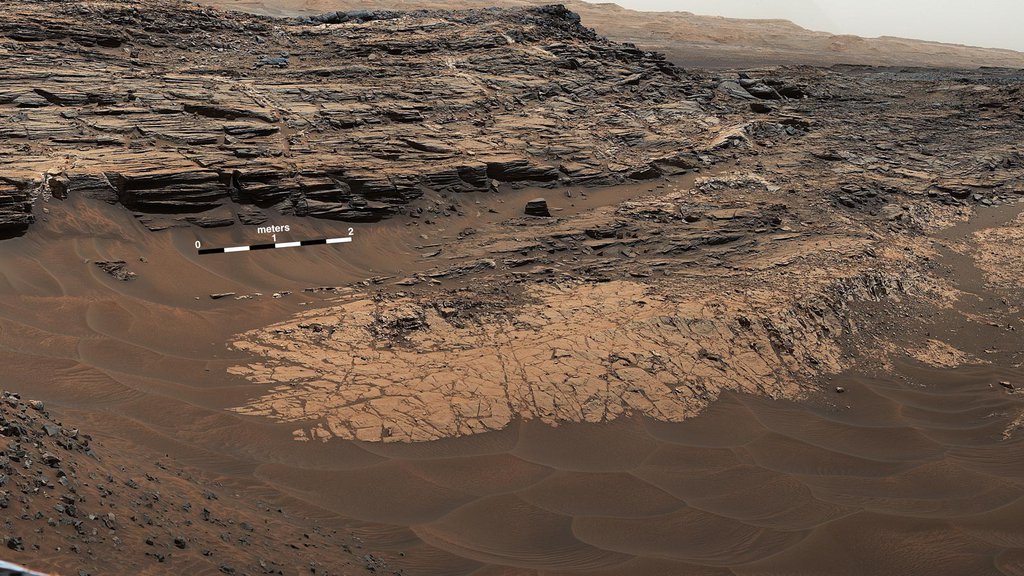 This May 22, 2015, view from the Mast Camera (Mastcam) in NASA's Curiosity Mars rover shows the "Marias Pass" area where a lower and older geological unit of mudstone -- the pale zone in the center of the image -- lies in contact with an overlying geological unit of sandstone.› Full image and caption
Credit: NASA/JPL-Caltech/MSSS 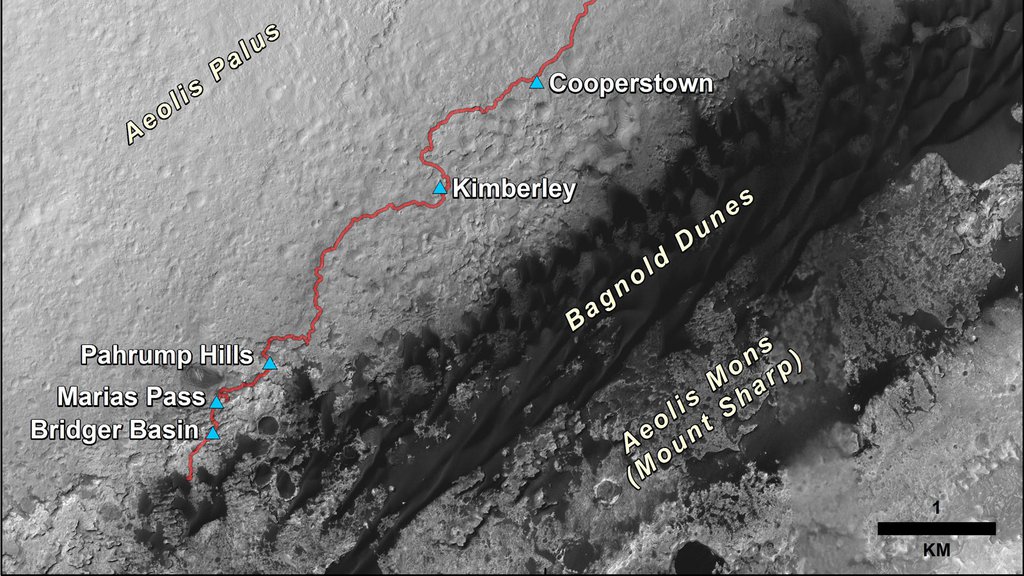 This map shows the route driven by NASA's Curiosity Mars rover from the location where it landed in August 2012 to its location in December 2015, at examples of the "Bagnold Dunes."› Full image and caption
Credit: NASA/JPL-Caltech/Univ. of Arizona 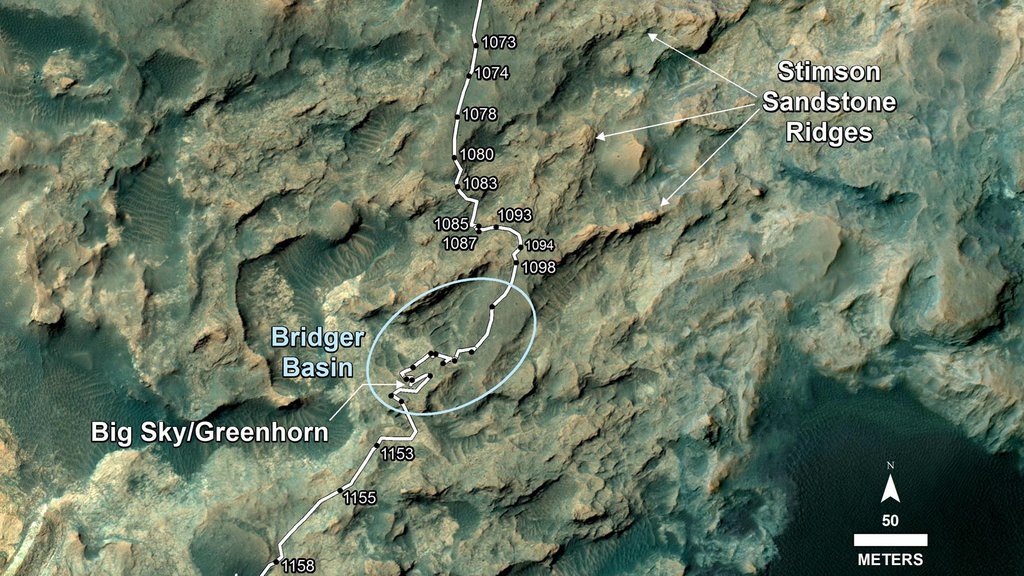 This map shows the route on lower Mount Sharp that NASA's Curiosity followed between April 19, 2015, and Nov. 5, 2015.› Full image and caption
Credit: NASA/JPL-Caltech/Univ. of Arizona 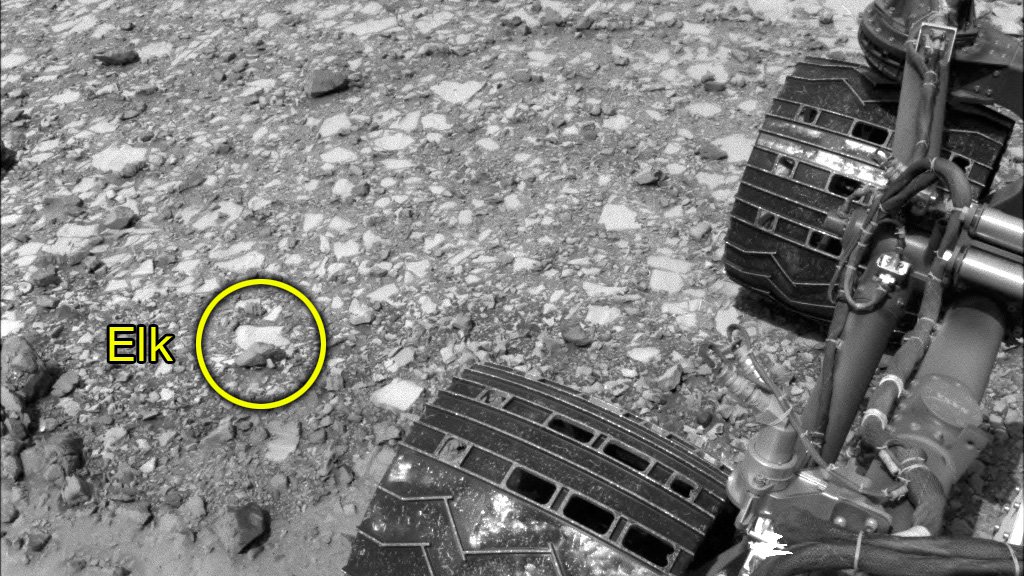 NASA's Curiosity Mars rover used its Navigation Camera (Navcam) to capture this view partway back down a slope it climbed toward "Marias Pass" on lower Mount Sharp.› Full image and caption
Credit: NASA/JPL-Caltech 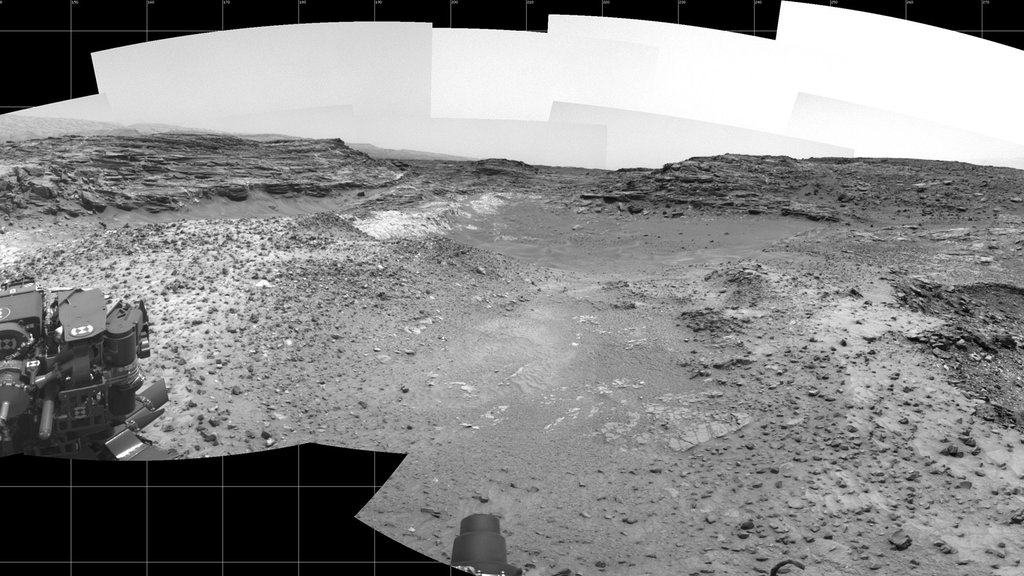 This 360-degree panorama shows the "Marias Pass" area, at center, and part of the slope that NASA's Curiosity Mars rover climbed to get there, at right.› Full image and caption
Credit: NASA/JPL-Caltech 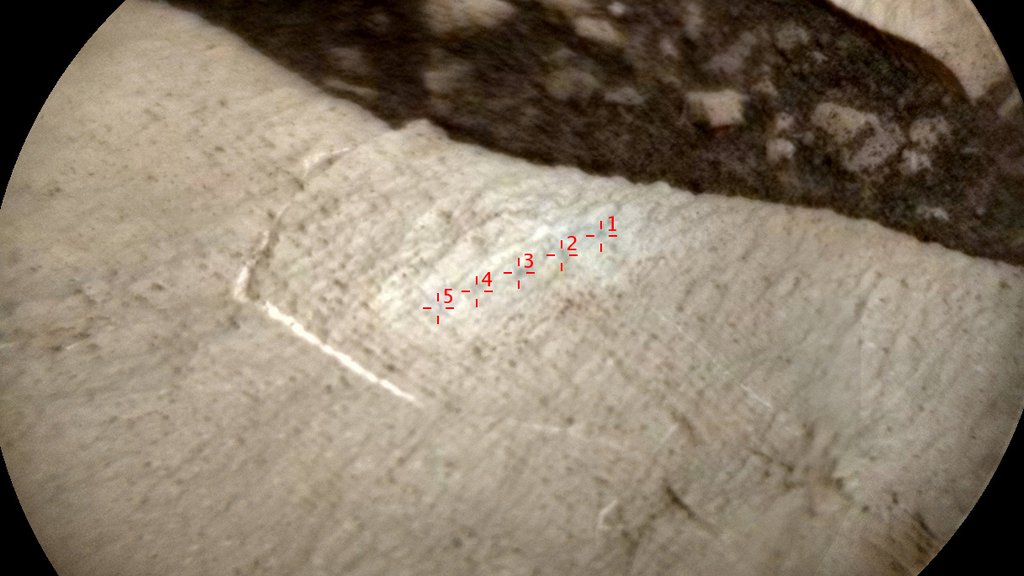 This image from the Chemistry and Camera (ChemCam) instrument on NASA's Curiosity Mars rover shows detailed texture of a rock target called "Elk" on Mars' Mount Sharp, revealing laminations that are present in much of the Murray Formation geological unit of lower Mount Sharp.› Full image and caption
Credit: NASA/JPL-Caltech/LANL/CNES/IRAP/LPGNantes/CNRS/IAS

At recently studied sites, Mars Curiosity has found higher silica concentrations than at sites visited earlier in its Martian travels.

In detective stories, as the plot thickens, an unexpected clue often delivers more questions than answers. In this case, the scene is a mountain on Mars. The clue: the chemical compound silica. Lots of silica. The sleuths: a savvy band of Earthbound researchers whose agent on Mars is NASA's laser-flashing, one-armed mobile laboratory, Curiosity.

NASA's Curiosity rover has found much higher concentrations of silica at some sites it has investigated in the past seven months than anywhere else it has visited since landing on Mars 40 months ago. Silica makes up nine-tenths of the composition of some of the rocks. It is a rock-forming chemical combining the elements silicon and oxygen, commonly seen on Earth as quartz, but also in many other minerals.

"These high-silica compositions are a puzzle. You can boost the concentration of silica either by leaching away other ingredients while leaving the silica behind, or by bringing in silica from somewhere else," said Albert Yen, a Curiosity science team member at NASA's Jet Propulsion Laboratory, Pasadena, California. "Either of those processes involve water. If we can determine which happened, we'll learn more about other conditions in those ancient wet environments."

Water that is acidic would tend to carry other ingredients away and leave silica behind. Alkaline or neutral water could bring in dissolved silica that would be deposited from the solution. Apart from presenting a puzzle about the history of the region where Curiosity is working, the recent findings on Mount Sharp have intriguing threads linked to what an earlier NASA rover, Spirit, found halfway around Mars. There, signs of sulfuric acidity were observed, but Curiosity's science team is still considering both scenarios -- and others -- to explain the findings on Mount Sharp.

Adding to the puzzle, some silica at one rock Curiosity drilled, called "Buckskin," is in a mineral named tridymite, rare on Earth and never seen before on Mars. The usual origin of tridymite on Earth involves high temperatures in igneous or metamorphic rocks, but the finely layered sedimentary rocks examined by Curiosity have been interpreted as lakebed deposits. Furthermore, tridymite is found in volcanic deposits with high silica content. Rocks on Mars' surface generally have less silica, like basalts in Hawaii, though some silica-rich (silicic) rocks have been found by Mars rovers and orbiters. Magma, the molten source material of volcanoes, can evolve on Earth to become silicic. Tridymite found at Buckskin may be evidence for magmatic evolution on Mars.

Curiosity has been studying geological layers of Mount Sharp, going uphill, since 2014, after two years of productive work on the plains surrounding the mountain. The mission delivered evidence in its first year that lakes in the area billions of years ago offered favorable conditions for life, if microbes ever lived on Mars. As Curiosity reaches successively younger layers up Mount Sharp's slopes, the mission is investigating how ancient environmental conditions evolved from lakes, rivers and deltas to the harsh aridity of today's Mars.

Seven months ago, Curiosity approached "Marias Pass," where two geological layers are exposed in contact with each other. The rover's laser-firing instrument for examining compositions from a distance, Chemistry and Camera (ChemCam), detected bountiful silica in some targets the rover passed on its way to the contact zone. The rover's Dynamic Albedo of Neutrons instrument simultaneously detected that the rock composition was unique in this area.

"The high silica was a surprise -- so interesting that we backtracked to investigate it with more of Curiosity's instruments," said Jens Frydenvang of Los Alamos National Laboratory in New Mexico and the University of Copenhagen, Denmark.

Gathering clues about silica was a major emphasis in rover operations over a span of four months and a distance of about one-third of a mile (half a kilometer).

The investigations included many more readings from ChemCam, plus elemental composition measurements by the Alpha Particle X-ray Spectrometer (APXS) on the rover's arm and mineral identification of rock-powder samples by the Chemistry and Mineralogy (CheMin) instrument inside the rover.

Buckskin was the first of three rocks where drilled samples were collected during that period. The CheMin identification of tridymite prompted the team to look at possible explanations: "We could solve this by determining whether trydymite in the sediment comes from a volcanic source or has another origin," said Liz Rampe, of Aerodyne Industries at NASA's Johnson Space Center, Houston. "A lot of us are in our labs trying to see if there's a way to make tridymite without such a high temperature."

Beyond Marias Pass, ChemCam and APXS found a pattern of high silica in pale zones along fractures in the bedrock, linking the silica enrichment there to alteration by fluids that flowed through the fractures and permeated into bedrock. CheMin analyzed drilled material from a target called "Big Sky" in bedrock away from a fracture and from a fracture-zone target called "Greenhorn." Greenhorn indeed has much more silica, but not any in the form of tridymite. Much of it is in the form of noncrystalline opal, which can form in many types of environments, including soils, sediments, hot spring deposits and acid-leached rocks.

"What we're seeing on Mount Sharp is dramatically different from what we saw in the first two years of the mission," said Curiosity Project Scientist Ashwin Vasavada of JPL. "There's so much variability within relatively short distances. The silica is one indicator of how the chemistry changed. It's such a multifaceted and curious discovery, we're going to take a while figuring it out."

For more about Curiosity, which is examining sand dunes this month, visit: