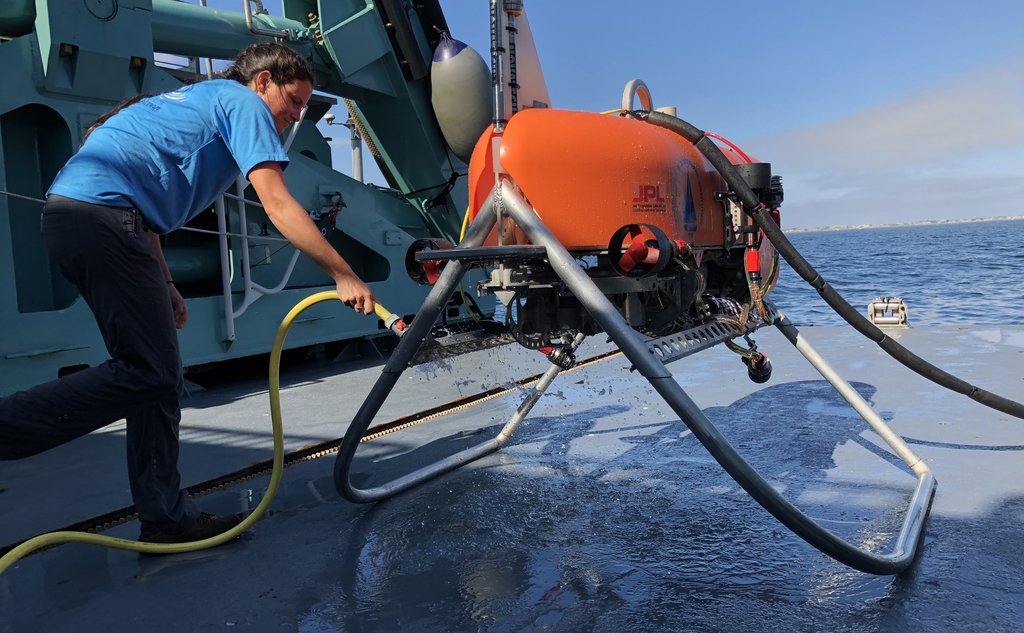 The Orpheus submersible robot is being developed by Woods Hole Oceanographic Institute and JPL to explore the deep ocean autonomously. Orpheus uses vision-based navigation that works in a similar way to how the Ingenuity Mars Helicopter navigates during flight. 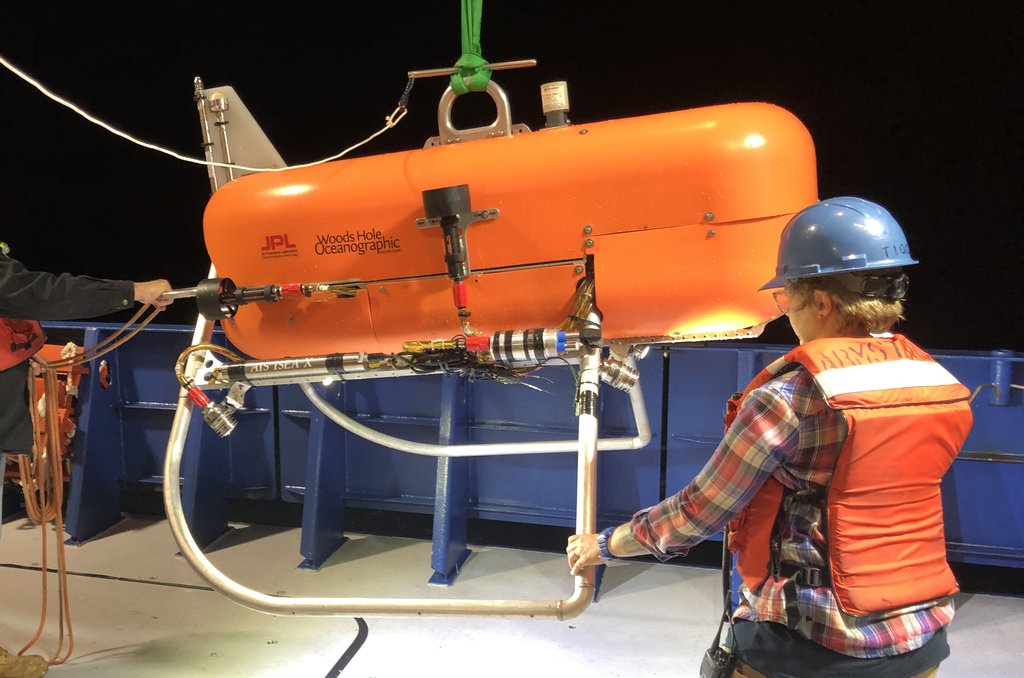 The submersible can explore the most extreme depths of the ocean, creating 3D maps of the seafloor. Shown in this photo during a previous expedition, Orpheus is much smaller than other submersibles, making it easier to transport and operate.

On May 14, the National Oceanic and Atmospheric Administration (NOAA) ship Okeanos Explorer will depart from Port Canaveral in Florida on a two-week expedition led by NOAA Ocean Exploration, featuring the technology demonstration of an autonomous underwater vehicle. Called Orpheus, this new class of submersible robot will showcase a system that will help it find its way and identify interesting scientific features on the seafloor.

Terrain-relative navigation was instrumental in helping NASA’s Mars 2020 Perseverance Mars rover make its precision touch down on the Red Planet on Feb. 18. The system allowed the descending robot to visually map the Martian landscape, identify hazards, and then choose a safe place to land without human assistance. In a similar way, the agency’s Ingenuity Mars Helicopter uses a vision-based navigation system to track surface features on the ground during flight in order to estimate its movements across the Martian surface.

Developed by engineers at NASA’s Jet Propulsion Laboratory in Southern California, an evolution of the vision-based navigation that has been used on Mars will now undergo a trial run a little closer to home: off the U.S. East Coast in the Atlantic Ocean.

Large, high-power location-finding equipment like sonar would normally be required to navigate the dark and often murky waters near the seabed. By utilizing a low-power system of cameras and lights, along with advanced software, Orpheus is an order of magnitude lighter than most deep-sea submersibles. Smaller than a quad bike and weighing about 550 pounds (250 kilograms), Orpheus is designed to be nimble, easy to operate, and rugged while exploring depths inaccessible to most vehicles. 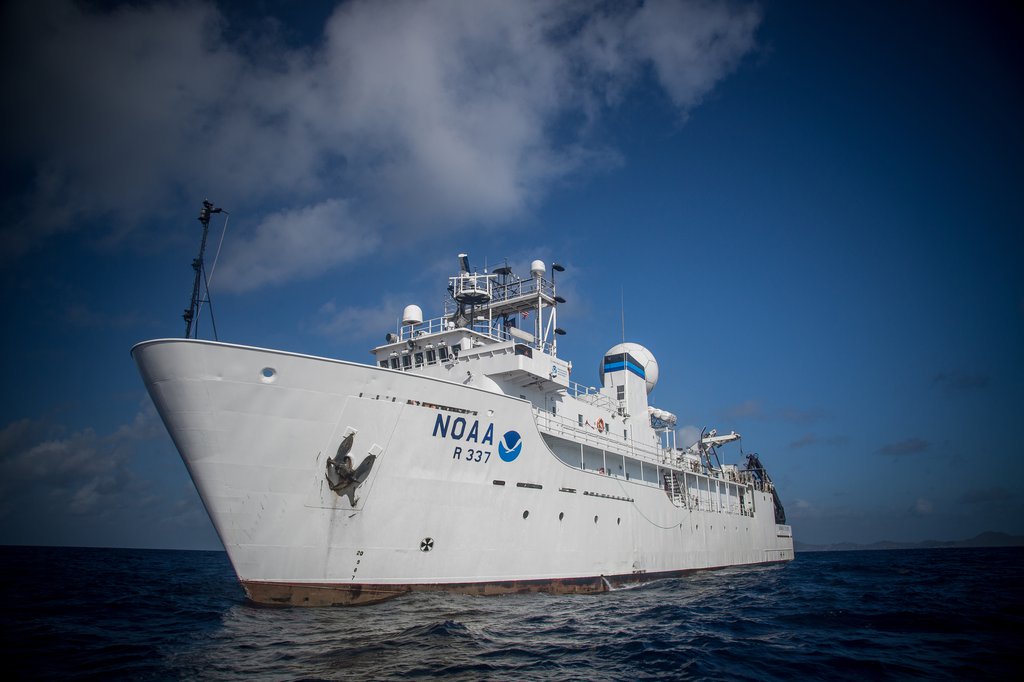 The Orpheus technology demonstration will be carried out aboard the NOAA ship Okeanos Explorer. After departing from Florida’s Port Canaveral on May 14, the two-week expedition explores the waters off the U.S. East Coast.

Designed by Woods Hole Oceanographic Institution (WHOI) in collaboration with JPL, Orpheus can work untethered almost anywhere in the ocean, including the most extreme depths. Ultimately, the project team hopes to see a swarm of these underwater robots work as a team to build 3D maps of the vast regions of unexplored ocean floor in the hadal zone – regions deeper than 20,000 feet (6,000 meters). But before the robot can explore these depths, it must first be put through its paces in shallower waters.

Diving Into the Future

“This tech demo will be used to gather data to demonstrate the viability of terrain-relative navigation in the ocean while also showing how multiple robots will operate together in extreme environments,” said Russell Smith, robotics mechanical engineer at JPL. “These tests will put us on track to start future dives into the hadal zone and intelligently seek out exciting regions of high biological activity.” 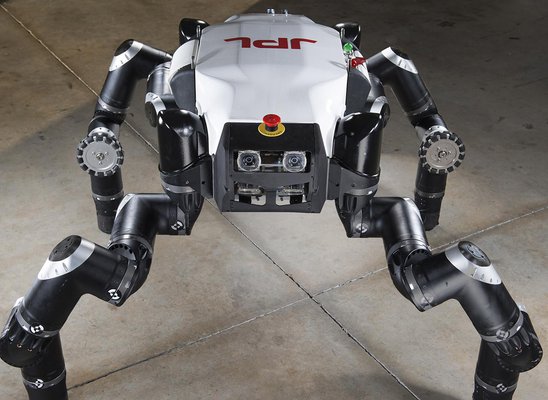 Explore a gallery of cutting-edge robot prototypes being developed for future planetary exploration.

Orpheus’ version of vision-based navigation is called visual-inertial odometry, or xVIO, and it works by using a system of advanced cameras and pattern-matching software along with instruments that can precisely measure its orientation and motion. As Orpheus travels over the seafloor, xVIO identifies features – such as rocks, shells, and coral – below the vehicle. Like remembering landmarks during a road trip, xVIO will construct 3D maps using these features as waypoints to help it navigate. But this system is more than simply a means to prevent the submersible robot from getting lost.

The high-resolution maps xVIO creates are stored to memory so that when Orpheus returns to the area, it will recognize the unique distribution of the features and use them as a starting point to expand its exploration. And when working with robot buddies, maps can be shared, cross-referenced, and developed to quickly identify areas of scientific interest.

“In the future, some of the most extreme ocean environments will be within our reach. From deep ocean trenches to hydrothermal vents, there are many new destinations we will explore,” said Andy Klesh, a systems engineer also at JPL. “By staying small, we’ve created a new, simplified tool for ocean scientists – one that directly benefits NASA as an analogue system for autonomous space exploration.”

But Klesh noted another virtue of the collaboration between NASA and organizations like WHOI and NOAA, with their extensive oceanographic expertise: The technologies being developed to explore Earth’s oceans with smart, small, and rugged autonomous underwater vehicles could ultimately be harnessed to explore the oceans on other worlds.

Earth analogues are often used as environmental stand-ins for other locations in the solar system. For example, Jupiter’s moon Europa possesses a subsurface ocean that could host conditions favorable to life.

“At hadal depths on Earth, the pressures are roughly equivalent to the bottom of Europa’s subsurface ocean, thought to be maybe 80 kilometers [50 miles] deep,” said Tim Shank, the biologist leading WHOI’s HADEX (Hadal Exploration) program. “It is a profound thing to think that this expedition could be the stepping stone to new discoveries about our own planet, including answering that most fundamental question: Is life unique to Earth, or are there other places beyond this pale blue dot where life could have arisen? But before we can explore Europa or any other ocean world, we have to better understand our own home first.”

For more information about the technology demonstration, see: