Rings, Dark Side of Saturn Glow in New Cassini Image 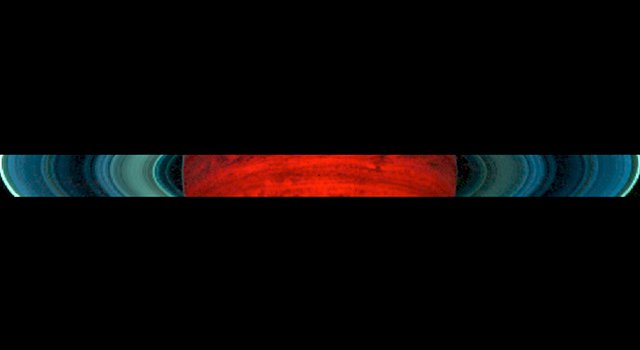 This colorized mosaic from NASA's Cassini mission shows an infrared view of the Saturn system, backlit by the sun, from July 19, 2013.› Full image and caption
Credit: NASA/JPL-Caltech/University of Arizona/Cornell

This high-contrast, colorized mosaic from NASA's Cassini mission shows an infrared view of the Saturn system, backlit by the sun, from July 19, 2013.› Full image and caption
Credit: NASA/JPL-Caltech/University of Arizona/Cornell

The gauzy rings of Saturn and the dark side of the planet glow in newly released infrared images obtained by NASA's Cassini spacecraft.

Story Highlights:
- The Cassini spacecraft scanned across Saturn and its rings when the sun was behind the planet and faint rings were easier to detect.
- This latest infrared image shows a strip about 340,000 miles (540,000 kilometers) across that includes the planet and its rings out to Saturn's second most distant ring.

PASADENA, Calif. -- The gauzy rings of Saturn and the dark side of the planet glow in newly released infrared images obtained by NASA's Cassini spacecraft.

"Looking at the Saturn system when it is backlit by the sun gives scientists a kind of inside-out view of Saturn that we don't normally see," said Matt Hedman, a participating scientist based at the University of Idaho, Moscow, Idaho. "The parts of Saturn's rings that are bright when you look at them from backyard telescopes on Earth are dark, and other parts that are typically dark glow brightly in this view."

It can be difficult for scientists to get a good look at the faint outer F, E and G rings, or the tenuous inner ring known as the D ring when light is shining directly on them. That's because they are almost transparent and composed of small particles that do not reflect light well. What's different about this viewing geometry?

- When these small particles are lit from behind, they show up like fog in the headlights of an oncoming vehicle.
- The C ring also appears relatively bright here; not because it is made of dust, but because the material in it -- mostly dirty water ice -- is translucent. In fact, in the 18th and 19th centuries, it was known as the "crepe ring" because of its supposed similarity to crepe paper.
- The wide, middle ring known as the B ring -- one of the easiest to see from Earth through telescopes because it is densely packed with chunks of bright water ice -- looks dark in these images because it is so thick that it blocks almost all of the sunlight shining behind it.

Infrared images also show thermal, or heat, radiation. While a visible-light image from this vantage point would simply show the face of the planet as dimly lit by sunlight reflected off the rings, Saturn glows brightly in this view because of heat from Saturn's interior.

In a second version of the image, scientists "stretched" or exaggerated the contrast of the data, which brings out subtleties not initially visible.

- Structures in the wispy E ring -- made from the icy breath of the moon Enceladus -- reveal themselves in this exaggerated view.

"We're busy working on analyzing the infrared data from this special view of the Saturn system," said Phil Nicholson, a visual and infrared mapping spectrometer team member from Cornell University, Ithaca, N.Y. "The infrared data should tell us more about the sizes of the particles which make up the D, E, F and G rings, and how these sizes vary with location in the rings, as well as providing clues as to their chemical composition."

Launched in 1997, Cassini has been exploring the Saturn system for more than nine years with a suite of instruments that also includes visible-light cameras, ultraviolet and infrared spectrometers, as well as magnetic field and charged particle sensors. Scientists working with the visible light cameras are still busy putting together and analyzing their mosaic -- or multi-image picture -- of the Saturn system.

"Cassini's long-term residency at the ringed planet means we've been able to observe change over nearly half a Saturn-year (one Saturn-year is equal to almost 30 Earth-years) with a host of different tools," said Linda Spilker, Cassini project scientist, based at NASA's Jet Propulsion Laboratory, Pasadena, Calif. "Earth looks different from season to season and Saturn does, too. We can't wait to see how those seasonal changes affect the dance of icy particles as we continue to observe in Saturn's rings with all of Cassini's different 'eyes.'"