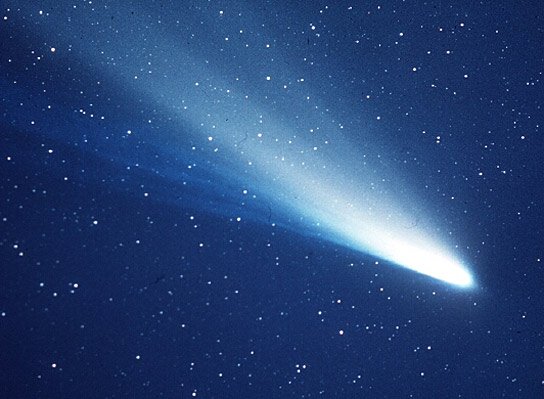 The countdown has begun in anticipation of the return appearance of Halley's comet, as scientists from around the world gather this week in Pasadena for general meeting of the International Halley Watch.

The countdown has begun in anticipation of the return appearance of Halley's comet, as scientists from around the world gather this week in Pasadena for general meeting of the International Halley Watch.

The IHW organization coordinates ground-based observations by professional and amateur Halley watchers around the world. These ground-based studies will be coordinated with airborne, Earth-orbital and spacecraft flyby observations.

Representatives of the two lead centers will be joined at the meeting by IHW discipline specialists (in such fields as astrometry, photometry and polarimetry, radio science and spectroscopy); representatives of the European, Japanese and Soviet spacecraft missions to Halley; and members of the IHW Steering Group.

The meeting is expected to be the last general gathering of the IHW before perihelion, or Halley's closest approach to the sun.

The comet will pass the average distance of Jupiter from the sun on Jan. 1O of this week, still some 48O million miles from the sun.

To professional astronomers, Halley has already "returned," as it has been under observation since fall 1982, according to JPL's Ray Newburn, who as Western Hemisphere IHW leader is chairman of this week's proceedings.

Astronomers have observed that Halley's coma -- the bright halo of dust and gas surrounding the nucleus -- has begun developing, and they are now questioning why the comet is exhibiting this feature at such great distance from the sun. Early observations have also revealed that the comet's brightness is fluctuating, again to the puzzlement of scientists.

Thus far, about 9OO professional astronomers from 5O countries have signed on as members of the Halley Watch. Some 3OO amateur astronomers have committed to observing for the IHW, and thousands more are expected to observe Halley informally.

Amateur observers with small telescopes will be able to see Halley this fall. Naked-eye viewing from dark- sky sites should be possible by early 1986, perhaps in January and definitely by March or April. Conditions for this 29th recorded appearance of Halley will not be as good as those during the 191O apparition, because of different sun-Earth-Halley geometry. Halley will appear again in 2O61.