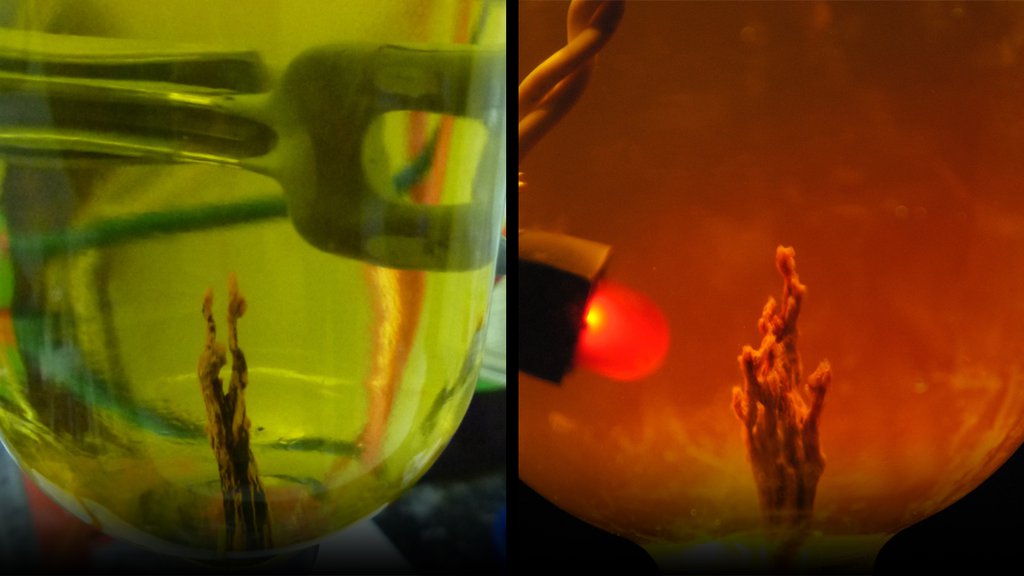 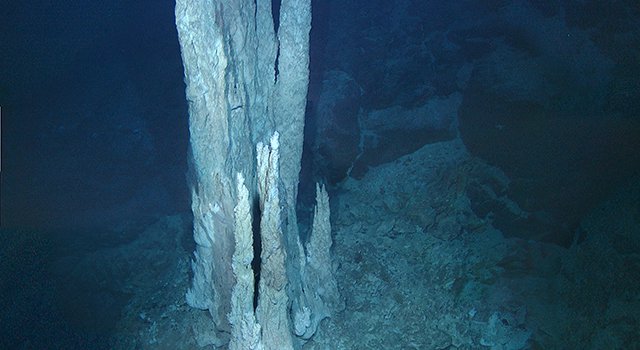 This image from the floor of the Atlantic Ocean shows a collection of limestone towers known as the "Lost City." Alkaline hydrothermal vents of this type are suggested to be the birthplace of the first living organisms on the ancient Earth. Image courtesy D. Kelley and M. Elend/University of Washington

How did the very first life forms on Earth get an electrical boost? New laboratory experiments offer clues.

One of the key necessities for life on our planet is electricity. That's not to say that life requires a plug and socket, but everything from shrubs to ants to people harnesses energy via the transfer of electrons -- the basis of electricity. Some experts think that the very first cell-like organisms on Earth channeled electricity from the seafloor using bubbling, chimney-shaped structures, also known as chemical gardens.

In a new study, researchers report growing their own tiny chimneys in a laboratory and using them to power a light bulb. The findings demonstrate that the underwater structures may have indeed given an electrical boost to Earth's very first life forms.

"These chimneys can act like electrical wires on the seafloor," said Laurie Barge of NASA's Jet Propulsion Laboratory, Pasadena, California, lead author of a new paper on the findings in the journal Angewandte Chemie International Edition. "We're harnessing energy as the first life on Earth might have."

The findings are helping researchers put together the story of life on Earth, starting with the first chapter of its origins. How life first took root on our nascent planet is a topic riddled with many unanswered chemistry questions. One leading theory for the origins of life, called the alkaline vent hypothesis, is based on the idea that life sprang up underwater with the help of warm, alkaline (as opposed to acidic) chimneys.

Chimneys naturally form on the seafloor at hydrothermal vents. They range in size from inches to tens of feet (centimeters to tens of meters), and they are made of different types of minerals with, typically, a porous structure. On early Earth, these chimneys could have established electrical and proton gradients across the thin mineral membranes that separate their compartments. Such gradients emulate critical life processes that generate energy and organic compounds.

"Life doesn't want to get electrocuted, but needs just the right amount of electricity," said Michael Russell of JPL, a co-author of the study. "This new experiment confirms what that amount of electricity is -- just under a volt." Russell first proposed the alkaline vent hypothesis in 1989, and even predicted the existence of alkaline vent chimneys more than a decade before they were actually discovered in the Atlantic Ocean and dubbed "The Lost City."

Previously, researchers at the University of Tokyo and the Japan Agency for Marine-Earth Science and Technology recorded electricity in "black smoker" vent chimneys in the Okinawa Trough in Japan. Black smokers are acidic -- and hotter and harsher -- than alkaline vents.

The new study demonstrates that laboratory chimneys similar to alkaline vents on early Earth had enough electricity to do something useful -- in this case power an LED (light-emitting diode) light bulb. The researchers connected four of the chemical gardens, submerged in iron-containing fluids, to turn on one light bulb. The process took months of patient laboratory work by Barge and Russell's team, with the help of an undergraduate student intern at JPL, Yeghegis "Lily" Abedian.

"I remember when Lily told me the light bulb had turned on. It was shocking," said Barge (while admitting she likes a good pun).

The scientists hope to do the experiment again using different materials for their laboratory chimneys. In the current study, they made chimneys of iron sulfide and iron hydroxide, geological materials that can conduct electrons. Future experiments can assess the electrical potential of additional materials thought to have been present in Earth's early oceans and hydrothermal vents, such as molybdenum, nickel, hydrogen and carbon dioxide.

"With the right recipe, maybe one chimney alone will be able to light the LED - or instead, we could use that electrochemical energy to power other reactions," said Barge. "We can also start simulating higher temperature and pressures that occur at hydrothermal vents."

Materials or other energy sources thought to have been involved in the possible development of life on other planets and moons can be tested too, such as those on early Mars, or icy worlds like Jupiter's moon Europa.

The electrical needs of life's first organisms are only one of many puzzles. Other researchers are trying to figure out how organic materials, such as DNA, might have assembled from scratch. The ultimate goal is to fit all the pieces together into one amazing story of life's origins.

For more information about the NASA Astrobiology Institute, visit: