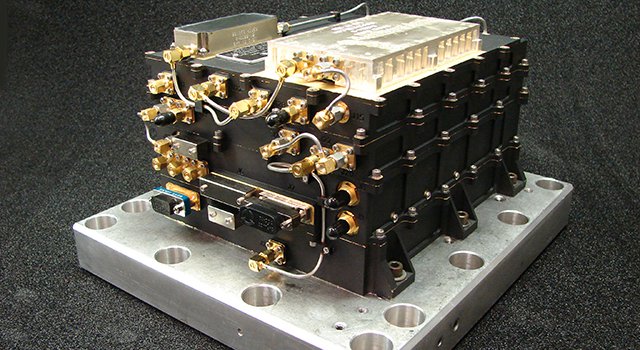 This radio hardware, the Electra UHF Transceiver on NASA's MAVEN mission to Mars, is designed to provide communication relay support for robots on the surface of Mars.› Full image and caption

With completion of a checkout of the relay radio on NASA's Mars-bound MAVEN spacecraft, all of the onboard payloads have now successfully passed initial in-flight checkouts.

The team operating NASA's Mars Atmosphere and Volatile Evolution (MAVEN) mission successfully completed, on Feb. 19, 2014, the initial post-launch power-on and checkout of the spacecraft's Electra Ultra High Frequency Transceiver. This wraps up the initial checkouts of all payloads on the MAVEN spacecraft, with everything performing as expected.

MAVEN will examine the upper atmosphere of Mars to provide understanding about processes that led to the loss of much of the original Martian atmosphere. Data and analysis could tell planetary scientists the history of climate change on the Red Planet and provide further information on the history of planetary habitability. The spacecraft was launched on Nov. 18, 2013, and will enter orbit around Mars in September 2014.

The Electra radio payload is part of the NASA Mars Exploration Program's Mars Relay Network. This network is composed of orbiters, including NASA's Mars Odyssey and Mars Reconnaissance Orbiter, that provide reliable, high-data-rate relay communications links to landers on the surface of Mars, including NASA's Opportunity and Curiosity rovers. Using relay via orbiters, compared with the rovers' capability to transmit directly to Earth, greatly increases science data return from the Martian surface. MAVEN will be available to provide relay services on a contingency basis during its prime science mission and may routinely provide relay support during an anticipated extended mission. MAVEN's Electra payload is provided and operated by NASA's Jet Propulsion Laboratory, Pasadena, Calif.

Since launch, the mission team has checked out MAVEN's three suites of science instruments. The Particles and Fields Package contains six instruments to characterize the solar wind and the ionosphere of Mars. The Remote Sensing Package will determine global characteristics of the upper atmosphere and ionosphere. The Neutral Gas and Ion Mass Spectrometer will measure the composition of Mars' upper atmosphere.

MAVEN's principal investigator is based at the University of Colorado Boulder's Laboratory for Atmospheric and Space Physics in Boulder, Colo. The university provided science instruments and leads science operations, as well as education and public outreach, for the mission. NASA's Goddard Space Flight Center, Greenbelt, Md., manages the project and provided two of the science instruments for the mission. Lockheed Martin Space Systems, Denver, built the spacecraft and is responsible for mission operations. The University of California at Berkeley's Space Sciences Laboratory provided science instruments for the mission. JPL, a division of the California Institute of Technology in Pasadena, provides navigation support and Deep Space Network support, in addition to the Electra hardware and operations.