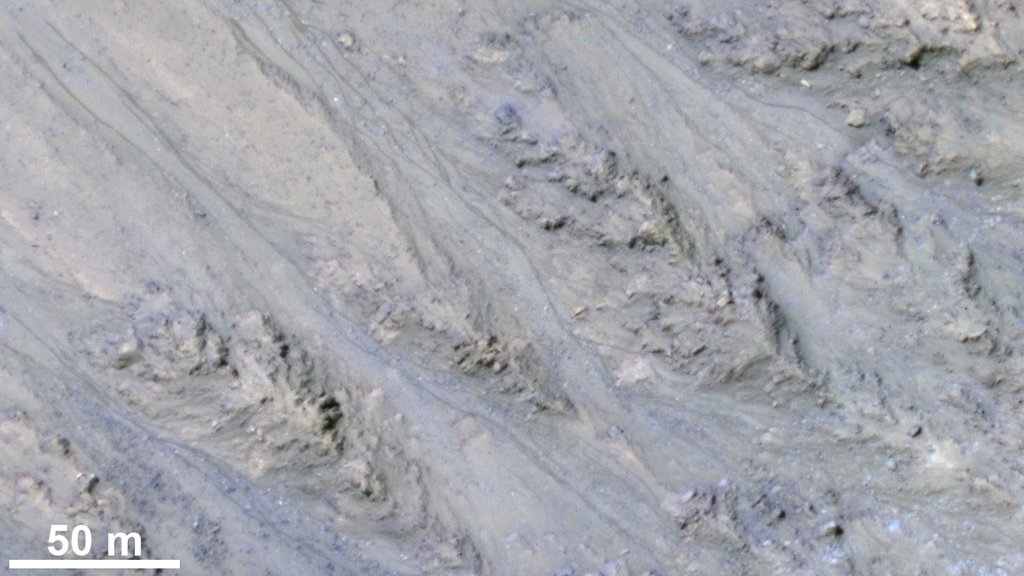 This inner slope of a Martian crater has several of the seasonal dark streaks called "recurrent slope lineae," or RSL, that a November 2017 report interprets as granular flows, rather than darkening due to flowing water. The image is from the HiRISE camera on NASA's Mars Reconnaissance Orbiter. Credits: NASA/JPL-Caltech/UA/USGS › Full image and caption

Seasonal dark streaks on Mars that previously were described as possible signs of flowing water have steep slopes that are better matches to dry flow processes.

› Seasonal dark streaks on Mars have been described as possible signs of flowing water; a new study shows they are a better fit to dry flow processes.

› The steepness of more than 150 of these features was assessed with a telescopic camera on a NASA Mars orbiter.

› The findings add to evidence that these environments may be too dry for microbes to thrive, despite the presence of water in hydrated salts.

› How seasonal warming triggers these streaks is still a puzzle, and water may be involved.

Dark features on Mars previously considered evidence for subsurface flowing of water are interpreted by new research as granular flows, where grains of sand and dust slip downhill to make dark streaks, rather than the ground being darkened by seeping water.

Continuing examination of these still-perplexing seasonal dark streaks with a powerful camera on NASA's Mars Reconnaissance Orbiter (MRO) shows they exist only on slopes steep enough for dry grains to descend the way they do on faces of active dunes.

The findings published today in Nature Geoscience argue against the presence of enough liquid water for microbial life to thrive at these sites. However, exactly how these numerous flows begin and gradually grow has not yet been explained. Authors of the report propose possibilities that include involvement of small amounts of water, indicated by detection of hydrated salts observed at some of the flow sites.

These features have evoked fascination and controversy since their 2011 discovery, as possible markers for unexpected liquid water or brine on an otherwise dry planet. They are dark streaks that extend gradually downhill in warm seasons, then fade away in winter and reappear the next year. On Earth, only seeping water is known to have these behaviors, but how they form in the dry Martian environment remains unclear.

Many thousands of these Martian features, collectively called "recurring slope lineae" or RSL, have been identified in more than 50 rocky-slope areas, from the equator to about halfway to the poles.

"We've thought of RSL as possible liquid water flows, but the slopes are more like what we expect for dry sand," said Colin Dundas of the U.S. Geological Survey's Astrogeology Science Center in Flagstaff, Arizona. "This new understanding of RSL supports other evidence that shows that Mars today is very dry."

Dundas is lead author of the report, which is based on observations with the High Resolution Imaging Science Experiment (HiRISE) camera on MRO. The data include 3-D models of slope steepness using pairs of images for stereo information. Dundas and co-authors examined 151 RSL features at 10 sites.

The RSL are almost all restricted to slopes steeper than 27 degrees. Each flow ends on a slope that matches the dynamic "angle of repose" seen in the slumping dry sand of dunes on Mars and Earth. A flow due to liquid water should readily extend to less steep slopes.

"The RSL don't flow onto shallower slopes, and the lengths of these are so closely correlated with the dynamic angle of repose, it can't be a coincidence," said HiRISE Principal Investigator Alfred McEwen at the University of Arizona, Tucson, a co-author of the new report.

The seasonal dark streaks have been thought of as possible evidence for biologically significant liquid water -- sufficient water for microbial life -- though explaining how so much liquid water could exist on the surface in Mars' modern environment would be challenging. A granular-flow explanation for RSL fits with the earlier understanding that the surface of modern Mars, exposed to a cold, thin atmosphere, lacks flowing water. A 2016 report also cast doubt on possible sources of underground water at RSL sites. Liquid water on today's Mars may be limited to traces of dissolved moisture from the atmosphere and thin films, which are challenging environments for life as we know it.

However, RSL remain puzzling. Traits with uncertain explanations include their gradual growth, their seasonal reappearance, their rapid fading when inactive, and the presence of hydrated salts, which have water molecules bound into their crystal stucture.

The new report describes possible connections between these traits and how RSL form. For example, salts can become hydrated by pulling water vapor from the atmosphere, and this process can form drops of salty water. Seasonal changes in hydration of salt-containing grains might result in some trigger mechanism for RSL grainflows, such as expansion, contraction, or release of some water. Darkening and fading might result from changes in hydration. If atmospheric water vapor is a trigger, then a question is why the RSL appear on some slopes but not others.

"RSL probably form by some mechanism that is unique to the environment of Mars," McEwen said, "so they represent an opportunity to learn about how Mars behaves, which is important for future surface exploration."

"Full understanding of RSL is likely to depend upon on-site investigation of these features," said MRO Project Scientist Rich Zurek of NASA's Jet Propulsion Laboratory, Pasadena, California. "While the new report suggests that RSL are not wet enough to favor microbial life, it is likely that on-site investigation of these sites will still require special procedures to guard against introducing microbes from Earth, at least until they are definitively characterized. In particular, a full explanation of how these enigmatic features darken and fade still eludes us. Remote sensing at different times of day could provide important clues."

The University of Arizona operates HiRISE, which was built by Ball Aerospace & Technologies Corp., Boulder, Colorado. JPL, a division of Caltech in Pasadena, California, manages the MRO Project for the NASA Science Mission Directorate in Washington. Lockheed Martin Space Systems of Denver built the orbiter and supports its operations.