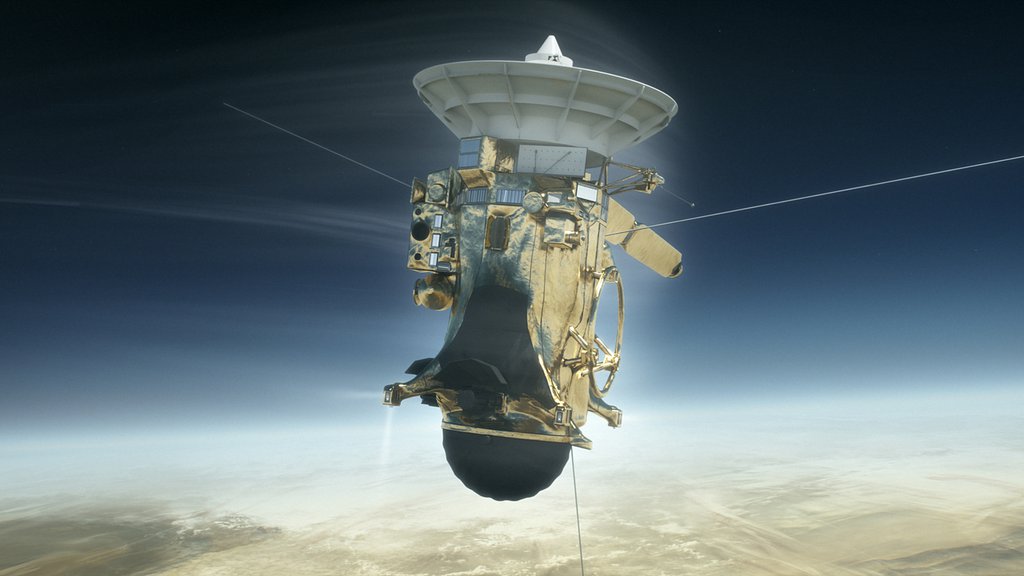 NASA's Cassini spacecraft is shown during its Sept. 15, 2017, plunge into Saturn's atmosphere in this artist's depiction.› Full image and caption
Credit: NASA/JPL-Caltech

Analysis of science data from the spacecraft's final plunge is ongoing, but Cassini engineers already have a clear understanding of how the spacecraft behaved during its dive.

As NASA's Cassini spacecraft made its fateful dive into the upper atmosphere of Saturn on Sept. 15, the spacecraft was live-streaming data from eight of its science instruments, along with readings from a variety of engineering systems. While analysis of science data from the final plunge will take some time, Cassini engineers already have a pretty clear understanding of how the spacecraft itself behaved as it went in. The data are useful for evaluating models of Saturn's atmosphere the team used to predict the spacecraft's behavior at mission's end, and they help provide a baseline for planning future missions to Saturn.

Chief among these engineering data, or telemetry, are measurements indicating the performance of the spacecraft's small attitude-control thrusters. Each thruster was capable of producing a force of half a newton, which is roughly equivalent to the weight of a tennis ball on Earth.

During the final moments of its plunge, Cassini was traveling through Saturn's atmosphere, which was about the same density as the tenuous gas where the International Space Station orbits above Earth. In other words, there's barely any air there at all. Despite the fact that this air pressure is close to being a vacuum, Cassini was traveling about 4.5 times faster than the space station. The higher velocity greatly multiplied the force, or dynamic pressure, that the thin atmosphere exerted on Cassini. It's like the difference between holding your hand outside the window of a car moving at 15 mph versus one moving at 65 mph.

Data show that as Cassini began its final approach, in the hour before atmospheric entry it was subtly rocking back and forth by fractions of a degree, gently pulsing its thrusters every few minutes to keep its antenna pointed at Earth. The only perturbing force at that time was a slight tug from Saturn's gravity that tried to rotate the spacecraft.

"To keep the antenna pointed at Earth, we used what's called 'bang-bang control,'" said Julie Webster, Cassini's spacecraft operations chief at NASA's Jet Propulsion Laboratory, Pasadena, California. "We give the spacecraft a narrow range over which it can rotate, and when it bangs up against that limit in one direction, it fires a thruster to tip back the other way." (This range was indeed small: just two milliradians, which equals 0.1 degree. The reconstructed data show Cassini was subtly correcting its orientation in this way until about three minutes before loss of signal.)

At this point, about 1,200 miles (1,900 kilometers) above the cloud tops, the spacecraft began to encounter Saturn's atmosphere. Cassini approached Saturn with its 36-foot-long (11-meter) magnetometer boom pointing out from the spacecraft's side. The tenuous gas began to push against the boom like a lever, forcing it to rotate slightly toward the aft (or backward) direction. In response, the thrusters fired corrective gas jets to stop the boom from rotating any farther. Over the next couple of minutes, as engineers had predicted, the thrusters began firing longer, more frequent pulses. The battle with Saturn had begun.

With its thrusters firing almost continuously, the spacecraft held its own for 91 seconds against Saturn's atmosphere -- the thrusters reaching 100 percent of their capacity during the last 20 seconds or so before the signal was lost. The final eight seconds of data show that Cassini started to slowly tip over backward. As this happened, the antenna's narrowly focused radio signal began to point away from Earth, and 83 minutes later (the travel time for a signal from Saturn), Cassini's voice disappeared from monitors in JPL mission control. First, the actual telemetry data disappeared, leaving only a radio carrier signal. Then, 24 seconds after the loss of telemetry, silence.

These data explain why those watching the signal -- appearing as a tall green spike on a squiggly plot of Cassini's radio frequency -- in mission control and live on NASA TV -- saw what appeared to be a short reprieve, almost as though the spacecraft was making a brief comeback. The spike of the signal first began to diminish over a few seconds, but then rose briefly again before disappearing with finality.

"No, it wasn't a comeback. Just a side lobe of the radio antenna beam pattern," Webster said. Essentially, the reprieve was an unfocused part of the otherwise narrow radio signal that rotated into view as the spacecraft began to slowly tip over.

"Given that Cassini wasn't designed to fly into a planetary atmosphere, it's remarkable that the spacecraft held on as long as it did, allowing its science instruments to send back data to the last second," said Earl Maize, Cassini project manager at JPL. "It was a solidly built craft, and it did everything we asked of it."

This animation shows the last 30 seconds of Cassini's X- and S-band radio signals as they disappeared from mission control on Sept. 15, 2017. The video has been sped up by a factor of two. Credit: NASA/JPL-Caltech Click to play movie