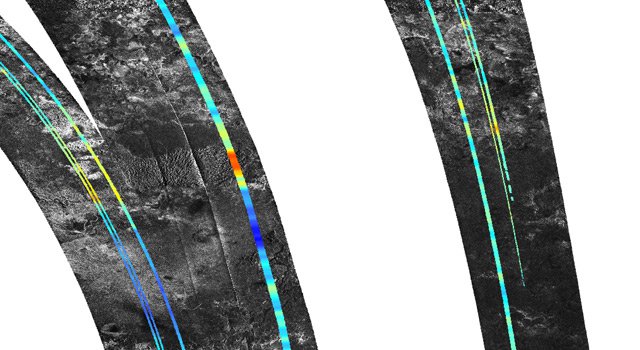 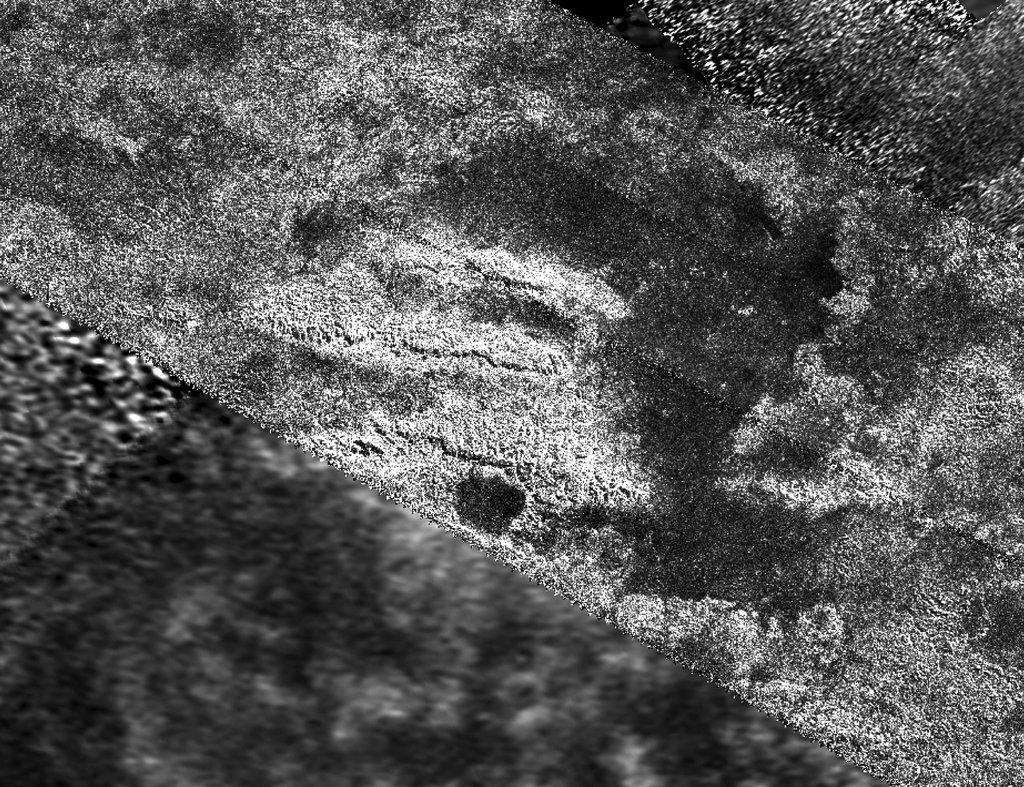 Saturn's moon Titan ripples with mountains, and scientists have been trying to figure out how they form.

Saturn's moon Titan ripples with mountains, and scientists have been trying to figure out how they form. The best explanation, it turns out, is that Titan is shrinking as it cools, wrinkling up the moon's surface like a raisin.

A new model developed by scientists working with radar data obtained by NASA's Cassini spacecraft shows that differing densities in the outermost layers of Titan can account for the unusual surface behavior. Titan is slowly cooling because it is releasing heat from its original formation and radioactive isotopes are decaying in the interior. As this happens, parts of Titan's subsurface ocean freeze over, the outermost ice crust thickens and folds, and the moon shrivels up. The model is described in an article now online in the Journal of Geophysical Research.

"Titan is the only icy body we know of in the solar system that behaves like this," said Giuseppe Mitri, the lead author of the paper and a Cassini radar associate based at the California Institute of Technology in Pasadena. "But it gives us insight into how our solar system came to be."

An example of this kind of process can also be found on Earth, where the crumpling of the outermost layer of the surface, known as the lithosphere, created the Zagros Mountains in Iran, Mitri said.

Titan's highest peaks rise up to about two kilometers (6,600 feet), comparable to the tallest summits in the Appalachian Mountains. Cassini was the first to spot Titan's mountains in radar images in 2005. Several mountain chains on Titan exist near the equator and are generally oriented west-east. The concentration of these ranges near the equator suggests a common history.

While several other icy moons in the outer solar system have peaks that reach heights similar to Titan's mountain chains, their topography comes from extensional tectonics -- forces stretching the ice shell -- or other geological processes. Until now, scientists had little evidence of contractional tectonics -- forces shortening and thickening the ice shell. Titan is the only icy satellite where the shortening and thickening are dominant.

Mitri and colleagues fed data from Cassini's radar instrument into computer models of Titan developed to describe the moon's tectonic processes and to study the interior structure and evolution of icy satellites. They also made the assumption that the moon's interior was only partially separated into a mixture of rock and ice, as suggested by data from Cassini's radio science team.

Scientists tweaked the model until they were able to build mountains on the surface similar to those Cassini had seen. They found the conditions were met when they assumed the deep interior was surrounded by a very dense layer of high-pressure water ice, then a subsurface liquid-water-and-ammonia ocean and an outer water-ice shell. So the model, Mitri explained, also supports the existence of a subsurface ocean.

Each successive layer of Titan's interior is colder than the one just inside it, with the outermost surface averaging a chilly 94 Kelvin (minus 290 degrees Fahrenheit). So cooling of the moon causes a partial freezing of the subsurface liquid ocean and thickening of the outer water ice shell. It also thickens the high-pressure ice. Because the ice on the crust is less dense than the liquid ocean and the liquid ocean is less dense than the high-pressure ice, the cooling means the interior layers lose volume and the top "skin" of ice puckers and folds.

Since the formation of Titan, which scientists believe occurred around four billion years ago, the moon's interior has cooled significantly. But the moon is still releasing hundreds of gigawatts of power, some of which may be available for geologic activity. The result, according to the model, was a shortening of the radius of the moon by about seven kilometers (four miles) and a decrease in volume of about one percent.

"These results suggest that Titan's geologic history has been different from that of its Jovian cousins, thanks, perhaps, to an interior ocean of water and ammonia," said Jonathan Lunine, a Cassini interdisciplinary scientist for Titan and co-author on the new paper. Lunine is currently based at the University of Rome, Tor Vergata, Italy. "As Cassini continues to map Titan, we will learn more about the extent and height of mountains across its diverse surface."

The Cassini-Huygens mission is a cooperative project of NASA, the European Space Agency and the Italian Space Agency. JPL manages the Cassini-Huygens mission for NASA's Science Mission Directorate. The Cassini orbiter was designed, developed and assembled at JPL. The radar instrument was built by JPL and the Italian Space Agency, working with team members from the United States and several European countries. JPL is a division of the California Institute of Technology in Pasadena.