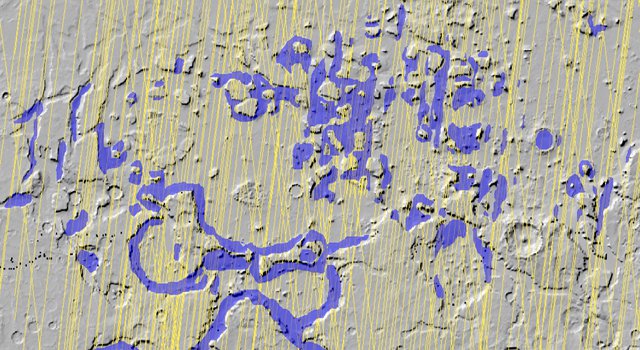 A radar on NASA's Mars Reconnaissance Orbiter has detected widespread deposits of glacial ice in the mid-latitudes of Mars. › Full image and caption

Extensive radar mapping of the middle-latitude region of northern Mars shows that thick masses of buried ice are quite common beneath protective coverings of rubble.

PASADENA, Calif. -- Extensive radar mapping of the middle-latitude region of northern Mars shows that thick masses of buried ice are quite common beneath protective coverings of rubble.

The ability of NASA's Mars Reconnaissance Orbiter to continue charting the locations of these hidden glaciers and ice-filled valleys -- first confirmed by radar two years ago -- adds clues about how these deposits may have been left as remnants when regional ice sheets retreated.

The subsurface ice deposits extend for hundreds of kilometers, or miles, in the rugged region called Deuteronilus Mensae, about halfway from the equator to the Martian north pole. Jeffrey Plaut of NASA's Jet Propulsion Laboratory, Pasadena, Calif., and colleagues prepared a map of the region's confirmed ice for presentation at this week's 41st Lunar and Planetary Science Conference near Houston.

The Shallow Radar instrument on the orbiter has obtained more than 250 observations of the study area, which is about the size of California.

"We have mapped the whole area with a high density of coverage," Plaut said. "These are not isolated features. In this area, the radar is detecting thick subsurface ice in many locations." The common locations are around the bases of mesas and scarps, and confined within valleys or craters.

Plaut said, "The hypothesis is the whole area was covered with an ice sheet during a different climate period, and when the climate dried out, these deposits remained only where they had been covered by a layer of debris protecting the ice from the atmosphere."

The researchers plan to continue the mapping. These buried masses of ice are a significant fraction of the known non-polar ice on Mars. The ice could contain a record of environmental conditions at the time of its deposition and flow, making the ice masses an intriguing possible target for a future mission with digging capability.

The Mars Reconnaissance Orbiter mission is managed by JPL for NASA's Science Mission Directorate in Washington. Lockheed Martin Space Systems in Denver was the prime contractor for the orbiter and supports its operations. The California Institute of Technology in Pasadena manages JPL for NASA.