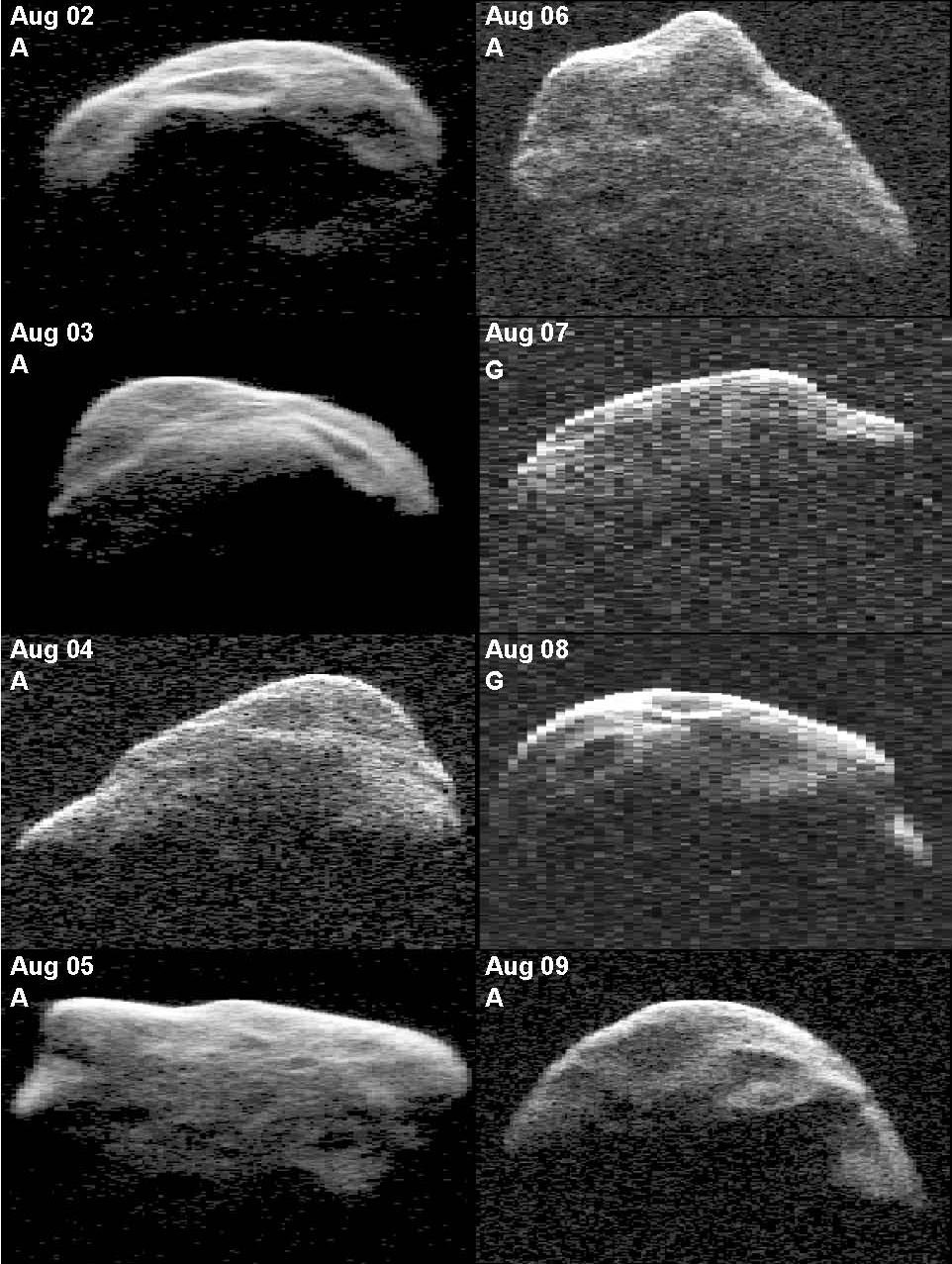 Radar observation of 1999 JM8 taken on August 3, 1999 with the Arecibo radar. The image reveals an asymmetric, irregularly-shaped object. 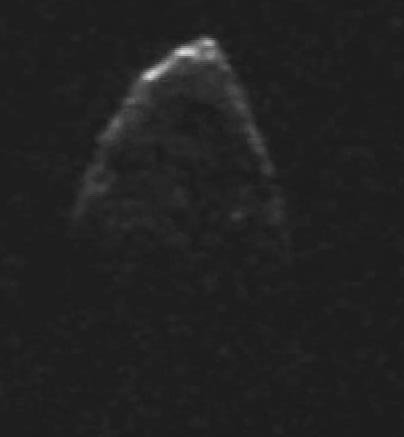 They are the celestial equivalent of sonograms. But their hazy outlines and ghostly features do not document the in-vivo development of a future taxpayer.

They are the celestial equivalent of sonograms. But their hazy outlines and ghostly features do not document the in-vivo development of a future taxpayer. Instead, they chronicle the exo-planetary comings-and-goings of some of Earth's least known, most nomadic, and at times most impactful neighbors.

They are radar echoes that are bounced off of asteroids. Scientists from NASA's Jet Propulsion Laboratory and around the world rely on their ethereal images to tell some out-of-this-world tales of near-Earth objects.

"The standard ground-based tools for asteroid science require a night's sky, and what you come away with in the end is an image of a dot," said JPL radar astronomer Dr. Steve Ostro. "With radar astronomy, the sky at high noon is just as inviting as that at midnight, and without launching a full-blown space mission we can actually get valuable information about the physical makeup of these objects."

In some respects, radar astronomy utilizes the same technology as your microwave oven. But do not bother to haul your glorified croissant warmer outside -- it will just confuse the neighbors. Radar astronomy employs the world's most massive dish-shaped antennas, which beam directed microwave signals at their targets, which can be as close as our moon and as far away as the moons of Saturn. These pulses bounce off the target, and the resulting "echo" is collected and precisely collated. The results can be astounding.

"The closer the target, the better the echo," said Ostro. "From them we can generate detailed three-dimensional models of the object, define its rotation precisely and get a good idea of its internal density distribution. You can even make out surface features. A good echo can give us a spatial resolution finer than 10 meters."

Radar astronomy has detected echoes from over 190 near-Earth asteroids to date and has found that, like snowflakes, no two are the same. The returning echoes have revealed both stony and metallic objects, some flying through the cold, dark reaches of space alone, while others have their own satellites. The data indicate that some asteroids have a very smooth surface, while others have very coarse terrain. And finally, their shapes are virtually anything that can be imagined.

One thing that does not have to be imagined is radar astronomy's ability to nail down the location of an object in time and space. This invaluable capability came in handy in the winter of 2004 when JPL's Near-Earth Object office was looking for a potentially hazardous asteroid called Apophis.

Discovered by astronomers using optical telescopes, Apophis quickly drew the interest of the near-Earth object monitoring community when its initial orbital plots indicated there was a possibility the 1,300-foot-wide chunk of space rock could impact Earth in 2029. The Near-Earth Object office knew what was needed was more detailed information about Apophis' location, which they could then use to plot out a more accurate orbit.

Under the watchful eye of Ostro and three other radar astronomers, microwaves from the Arecibo Observatory in Puerto Rico reached out and touched asteroid Apophis on Jan. 27, 29, and 30, 2005. The Arecibo data significantly improved the asteroid's orbital estimate, redefined its Earth approach distance in 2029 and decidedly reduced the probability of an Earth encounter during its next close approach in 2036.

The 1,000-foot diameter Arecibo telescope is one of only two places in the world where radar astronomy is effectively performed. The other is at the 70-meter Goldstone antenna in California's Mojave Desert. The two instruments are complementary. The Arecibo radar is not fully steerable (while Goldstone is), but it is 30 times more sensitive. Together they make a formidable asteroid reconnaissance team.

The future of radar astronomy may be just as amazing as some of the images and shape models of nearby space objects that its practitioners have already obtained. There is new technology in the pipeline that will allow imaging of surface features with up to four times more detail than what exists today. And then there are proposals on the table for a potential space mission to a near-Earth asteroid. Candidate asteroids for said mission will need to be pre-approved via detail scientific analysis. The kind of scientific analysis you can only get with radar astronomy.