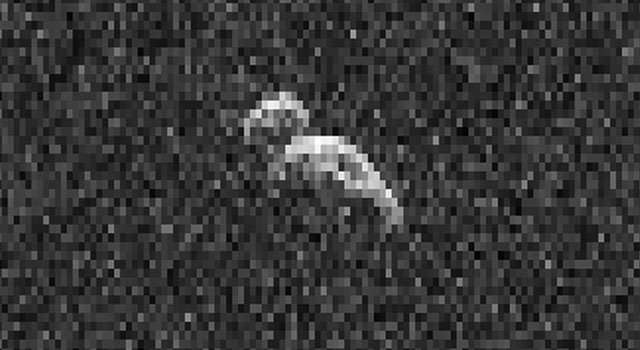 This image is one frame from a collage of radar images taken on Feb. 11, 2014, of near-Earth asteroid 2006 DP 14, which is about 1,300 feet (400 meters) long. The imaging used the 230-foot (70-meter) Deep Space Network antenna at Goldstone, Calif., while the asteroid was about 11 times farther from Earth than the moon is.
Credit: NASA/JPL-Caltech/GSSR

Radar images of peanut-shaped asteroid reveal it is no peanut-sized space rock.

A collage of radar images of near-Earth asteroid 2006 DP14 was generated by NASA scientists using the 230-foot (70-meter) Deep Space Network antenna at Goldstone, Calif., on the night of Feb. 11, 2014.

Delay-Doppler radar imaging revealed that the asteroid is about 1,300 feet (400 meters) long, 660 feet (200 meters) wide, and shaped somewhat like a big peanut. The asteroid's period of rotation is about six hours. The asteroid is of a type known as a "contact binary" because it has two large lobes on either end that appear to be in contact. Previous radar data from Goldstone and the Arecibo Observatory in Puerto Rico has shown that at least 10 percent of near-Earth asteroids larger than about 650 feet (200 meters) have contact binary shapes like that of 2006 DP14. The data were obtained over an interval of 2.5 hours as the asteroid completed about half a revolution. The resolution is about 60 feet (19 meters) per pixel.

Radar is a powerful technique for studying an asteroid's size, shape, rotation state, surface features and surface roughness, and for improving the calculation of asteroid orbits. While this asteroid would appear as no more than a point of light to optical telescopes, using planetary radar scientists are able to discern the physical characteristics of the asteroid and measure its exact distance from Earth. But, in order to point the enormous 230-foot (70-meter) dish antenna in the precise direction of the asteroid, numerous professional and amateur astronomers assisted in the days leading up to Feb. 11 by supplying observational data to help pinpoint the location. Radar measurements of asteroid distances and velocities often enable computation of asteroid orbits much further into the future than if radar observations weren't available.

NASA places a high priority on tracking asteroids and protecting our home planet from them. In fact, the United States has the most robust and productive survey and detection program for discovering near-Earth objects. To date, U.S. assets have discovered more than 98 percent of the known near-Earth objects.

More information about asteroid radar research is at: http://echo.jpl.nasa.gov/.

More information about the Deep Space Network is at: http://deepspace.jpl.nasa.gov/dsn.