Radar Images of a Christmas-Eve Asteroid: An Early Gift for Astronomers 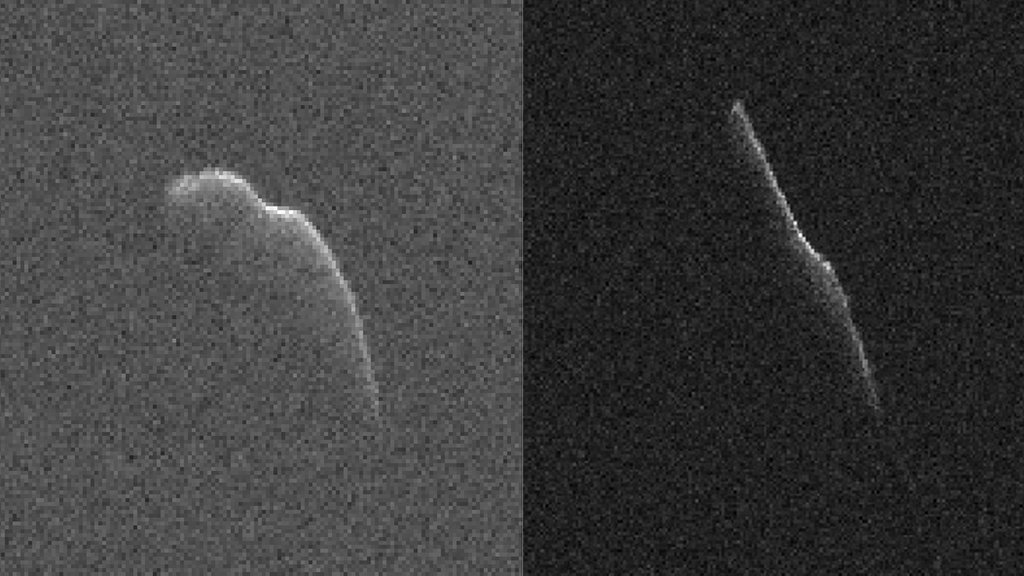 These images of an asteroid 3,600 feet (1,100 meters) long were taken on Dec. 17 (left) and Dec. 22 by scientists using NASA's giant Deep Space Network antenna at Goldstone, California. This asteroid will safely fly past Earth on Dec. 24, at a distance of 6.8 million miles (11 million kilometers).
Credit: NASA/JPL-Caltech/GSSR

Asteroid 2003 SD220 will safely fly past Earth on Dec. 24 at a distance of 6.8 million miles (11 million kilometers). Scientists at NASA's Jet Propulsion Laboratory in Pasadena, California, have generated the highest-resolution images to date of this asteroid using the Deep Space Network's 230-foot (70-meter) antenna at Goldstone, California. The radar images were acquired between Dec. 17 and Dec. 22, when the distance to this near-Earth object (NEO) was narrowing from 7.3 million miles (12 million kilometers) to almost the flyby distance.

"The radar images data suggest that asteroid 2003 SD220 is highly elongated and at least 3,600 feet [1,100 meters] in length," said Lance Benner of JPL, who leads NASA's asteroid radar research program. "The data acquired during this pass of the asteroid will help us plan for radar imaging during its upcoming closer approach in 2018."

Three years from now, the asteroid will safely fly past Earth again, but even closer, at a distance of 1.8 million miles (2.8 million kilometers). The 2018 flyby will be the closest the asteroid will get to Earth until 2070, when it is expected to safely fly past our planet at a distance of about 1.7 million miles (2.7 million kilometers).

"There is no cause for concern over the upcoming flyby of asteroid 2003 SD220 this Christmas Eve," said Paul Chodas, manager of NASA's Center for NEO Studies at JPL. "The closest this object will come to Santa and his eight tiny reindeer is about 28 times the distance between Earth and the moon."

Radar has been used to observe hundreds of asteroids. When these primitive denizens of the solar system pass relatively close to Earth, radar is a powerful technique for studying their sizes, shapes, rotation, surface features and roughness, and for improving the calculation of their orbits.